The Golden Eagle Festival is an annual celebration held in the Bayan-Ulgii Province of Western Mongolia that commemorates the traditions of the Kazakh hunters. The festival is held over two days during early October.

The Golden Eagle Festival is arranged by the local Kazakh community, a minority group within Mongolia that make up nearly 90% of the population living the Bayan-Uglii Province. Mongolian Kazakhs primarily practice Islam and have a distinct cultural heritage that differs to other Mongolians, part of the inspiration for the Golden Eagle Festival. In a historical context, Golden Eagles have been used by the Kazakhs for hunting over several centuries, the formation of the Golden Eagle Festival in 1999 aims to preserve their proud tradition. Whilst Golden Eagles are not commonly used in hunting anymore, many Kazakhs have kept these majestic birds as pets, allowing the Kazakhs owners to practice at a young age to become a berkutchi (Kazakh for Eagle Hunter).

Kazakh hunters travel from all over Mongolia for the opportunity to compete in tournaments that test their eagles speed, agility and accuracy. The first day of the festival will commence with a parade, a chance to witness the Kazakh hunters in all their glory. Mingle with the locals as you watch from the crowds as Kazakhs ride in a procession with their prized eagles perched on their arms, points are rewarded to the most elaborate and beautifully decorated outfits.

After the parade, the focus of the festival shifts towards the eagles and their incredible agility. Each Kazakh hunter leaves their eagle perched high on a cliff, before moving to the bottom of the cliff and calling the bird from below. The eagles are signalled to land on the arms of their owners with top points being rewarded to the pair with the fastest time and best technique. It’s a spectacular sight to see these birds of prey soar down to their owners and alight on their arms.

The festivities continue into the evening with a local concert paying tribute to the impressive performance of the Kazakh hunters and their eagles during the day before. It is common to find elaborate costumes and dresses are worn as people sing and dance traditional Kazakh ceremonies late into the night. Night time at the Golden Eagle Festival offers travellers a unique experience to mingle with the Kazakhs who have journeyed far to witness this culturally important celebration or speak to hunters as they relax after a hard days competition. The second day of the Golden Eagle Festival is all about the eagles speed and agility with various competitions organised to ensure that there is a winner by days end. The Golden Eagles are left high atop cliffs, with their owners riding a horse below with a fox skin being dragged behind the horse. Points are rewarded to the hunter whose eagle is fastest, as well as of their ‘gripping’ technique of the fox skin. As the festival winds down, the points from all of the various competitions, including horse racing, archery and tug of war on horseback, are tallied up and a winner is announced during the closing ceremony, before another night of celebrations. 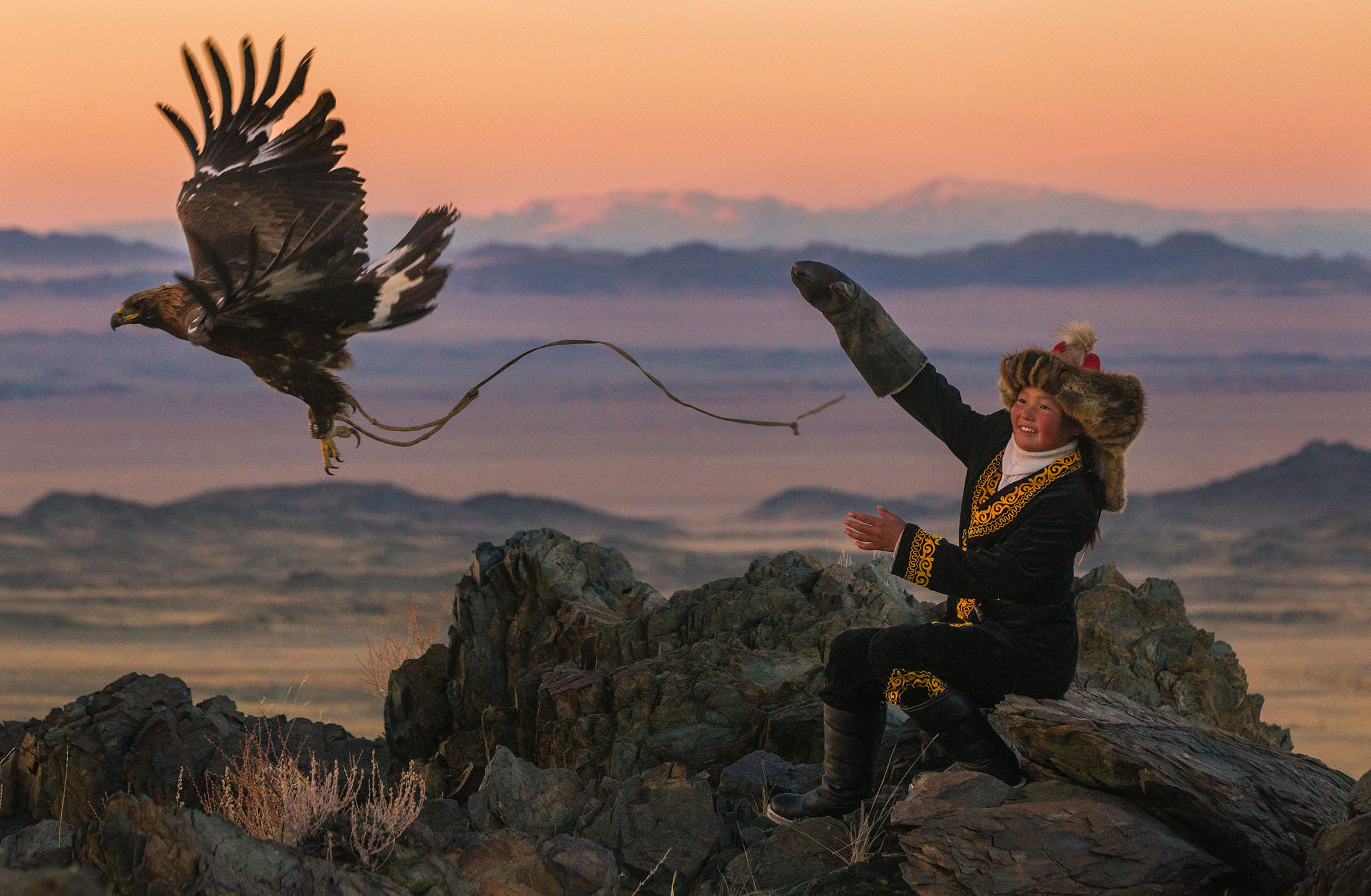 A Golden Eagle takes off.