Come and explore Tunisia - wedged into the top of North Africa. Marvel at the stunning Mediterranean coastline, hidden beaches and mouthwatering seafood. Dive head first into imperial Rome as you uncover some of the world's best preserved Roman ruins. Mingle with fascinating cultures and experience a time frozen way of life as you spend time with locals who still live in caves dug deep into the ground. The vast contrasts of natural wonders is extreme yet incredibly beautiful. From rolling Saharan sand dunes, crumbled Berber villages and lush oases to forested bays, natural hot springs and tangles of medinas, you will lose yourself entirely. Haggle in souks whilst sipping on mint tea, float in the aroma of a scented shisha or get scrubbed and steamed clean on the marble slab of a traditional hammam whilst the call to prayer rings overhead. Embrace age old traditions as they intertwine with the chic modern world. 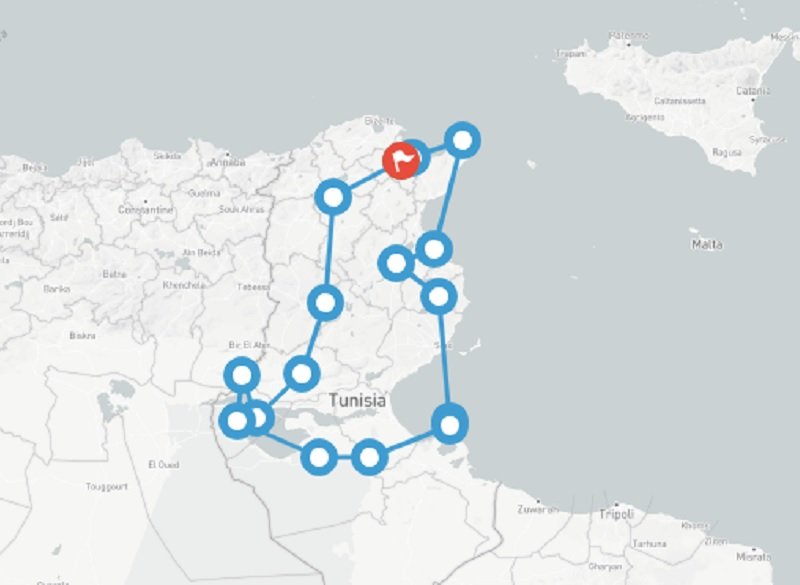 Welcome to Tunisia! On arrival into Tunis airport, you will be met and transferred to your hotel. The remainder of the day is at leisure. Tunis has always been a resilient and forward-looking settlement, one that makes an excellent starting point for any exploration of Tunisia. Now littered with artsy cafes and boutique hotels, the old is entwined with the new making this a buzzing city to explore.

Day 2 - Medina of Tunis, the Bardo Museum and Sidi Bousaid

This morning you will visit the Medina of Tunis. This tangle of history and character is a great introduction to the cities infrastructure decorated with ancient palaces, mosques and Arab style houses. A visit to the notorious Kasbah Square and the Al-Zaytouna mosque will also be made, with a presentation of the surrounding political institutions. Enjoy lunch at Dar El Jeld, an ancient Tunisian Palace which has been restored into one of the best restaurants in the capital. From here, you will visit the National Museum of Bardo, originally a 15-century Hafsid Palace, and today one of the largest museums in North Africa containing one of the finest collections of Mosaics. Transfer to the cliff top town of Sidi Bousaid. The view from this blue and white town is phenomenal as it peers over the Mediterranean. The entire town is simply beautiful and has inspired many artists to take up residence here. Enjoy exploring the picturesque streets. (B,D)

Today you will visit Dougga, a 65-hectare archaeological Roman site, declared by UNESCO as a World Heritage site. The site contained a large number of elaborate mosaic floors – some are in situ but most are housed in the Bardo Museum in Tunis. Most notable of all, however, are the twenty temples found, a truly disproportionate number of temples for the size of the population. At first it was thought that Dougga was a major religious site but it has since been decided that the temples were erected by wealthy residents as tribute for their good fortune. Continue on to visit Bulla Regia, another Roman archaeological site featuring unique domestic roman architecture.

El Kef is your destination for the day and is the most elevated city of Tunisia, standing at 2560 ft above the sea. Tucked away in the Atlas Mountains and the plains of the ‘hauts plateau’, you’ll find Le Kef, a charming little town with a tumultuous past. Natural beauty is not the only thing this region has to offer. The town has held on to countless memories of its vibrant history, including its Ottoman fortress. (B,D)

El Kef is known for Roman and Byzantine landmarks and also for its traditional Arabic residential quarters, such as the mausoleum of Sidi Makhlouf. Visit Sbeitla, also named Sufetula, famous for its best preserved Roman Forum temples in Tunisia, inhabited by the Byzantines before becoming the significant geographical point in the Muslim conquest of North Africa. Transfer to Tozeur through the enormous landscape of Gafsa.  Tozeur is a perfect desert oasis which enchants all who visit. Tozeur is a world apart from coastal Tunisian resorts and houses a medina full of unique brick-patterned architecture and a lush sprawling palm grove that makes for a refreshing sea of green through the desert sand. (B,D)

This morning enjoy a private visit of the oasis of Tozeur aboard a horse & carriage, followed by a visit to the Medina of Tozeur to discover the local life of the people of the Jerid. Visit the museum of dates where you will learn all about the different types of dates and how they are harvested and processed from the oasis of palm trees in this area. (B,D)

Today you will set off to visit Douz, also referred to in Arabic as ‘The Gate of The Sahara’. Spend time in Matmata, a small Berber village known for its troglodyte habitations and also home to the second most popular star wars site in Tunisia. Many Berbers still live in these cave houses. The homes in Matmata are not built on the side of the mountains. Instead, they are created by digging a large pit in the ground, and then around the sides of the pit, caves are dug to be used as rooms. The open pit functions as a courtyard, and are sometimes connected to other ‘pit’ courtyards nearby through trench-like passageways forming a large underground maze. (B,D)

Following breakfast, set off to visit Guellala, the capital of pottery in Djerba, an activity dating back centuries since before the Roman era. This small island, is the home of the last Tunisian Jews, with one of the largest and most vibrant Jewish populations in the Arab world – and the oldest synagogue in Africa which you will visit. (B,D)

Visit the downtown area of Djerba, Houmt Souk, meaning in Arabic ‘the market Neighbourhood’. Previously referred to in the Roman era, as the ‘Girba’ which is also the birth place of two Roman Emperors, Djerba is home to whitewashed buildings, sandy beaches rimmed with turquoise water, and colourful souks.

Heading up back north, you will stop at El Djem, a small city built by the Carthaginians and later colonised by the Romans. It was once the centre of the production of olive oil, with age old techniques still used today by a few hundred inhabitants as a source of life and income. The highlight though, is the roman amphitheatre, which is located at the centre of the city, from the top of which the scenery is just magnificent. This 3rd-century monument illustrates the grandeur and extent of Imperial Rome. (B,D)

Explore Kairouan, the Capital of Islam and the home to the Mosque of Uqba Ibn Nafi, the main leader of the Muslim conquest of the Maghreb. Kairouan’s heritage also includes the two monumental Aghlabid Basins, which has supplied the population with drinking water since the 8th century. Overnight in Sousse, or Hadrumetum, as called by the Phoenicians who founded it in the 11th century. (B,D)

Visit the local pottery market and Dar Chaabane stone sculpture workshops in Nabeul to see how the artisans turn clay and rocks into colourful kitchenware and various house decorations.

Take in the outstanding view on the way towards the Tunisian Peninsula along the coast of Kerkouane.

Enjoy lunch at Haouaria where lunch will be served at a restaurant located right at the crystal coloured beach! You will then enjoy a small hike in the Caves of Haouaria. It is then time to head to a coastal town on the Cap Bon peninsula known for its sandy beaches and hosting a 16th century citadel, 150 metres above sea level. (B,D)

This morning, enjoy a visit of Carthage, the central capital city of the Carthaginian civilisation. Carthage was founded in the 9th century B.C. on the Gulf of Tunis. From the 6th century onwards, it developed into a great trading empire covering much of the Mediterranean and was home to a brilliant civilization. In the course of the long Punic wars, Carthage occupied territories belonging to Rome, which finally destroyed its rival in 146 B.C. A second – Roman – Carthage was then established on the ruins of the first. The highlights of this visit are the Theatre of Carthage, nowadays hosting the Annual International Music Festival of Carthage, as well as the Antoninus Baths and the Punic Ports, once called ‘The Empire of the Sea’ for its strategic  location on the Mediterranean Sea. (B,D)

This morning is yours at leisure until it is time to transfer to the airport for your onward departure. (B)