Travel with us on our small group tour to Algeria to get away from it all - including the tourists. So close to Europe, yet you feel a world away. Offering a spectacular coastline, chic French influenced ports, snow capped mountains, rolling sand dunes and perfectly preserved Roman towns.

Touring in Algeria is a cultural odyssey. A perfect tangle of adventure, complex cultures and grand ruins, this is the perfect destination for the curious traveller seeking that next destination that is truly off beat. 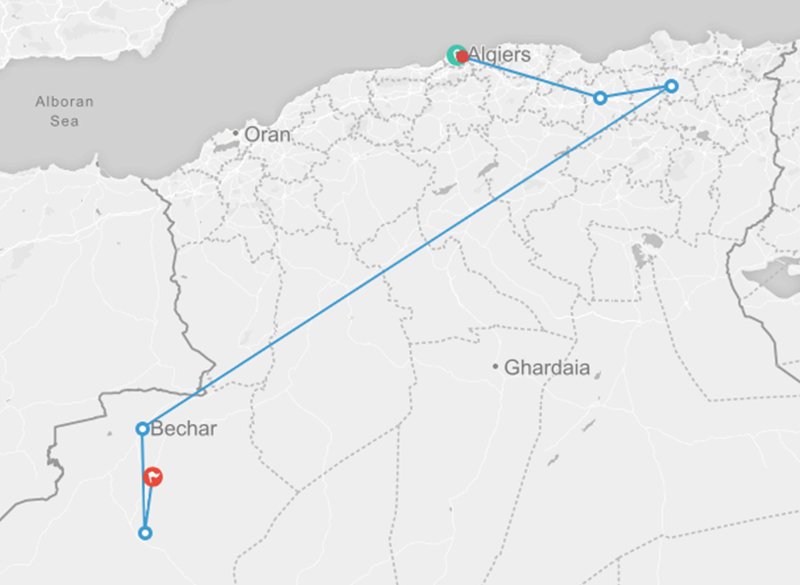 Welcome to Algeria! Upon arrival, you will be met at the airport and transferred to your hotel. The remainder of the day is yours at leisure.

This city is sure to leave a lasting impression on you. This is a city of rare beauty and of thrilling, disorientating, and sometimes brutal, contrast. The country’s turbulent history is writ large in the city’s richly textured architecture: wide French-built boulevards and elegant apartments and villas, Socialist-era monuments and public buildings, and an enduring Islamic heart secreted in the steep, hillside Kasbah. Labyrinthine streets spill down to the yawning Bay of Algiers.

After breakfast, enjoy an orientation of the city which includes a visit to the Kasbah of Algiers and the colonial Cathedral of Notre Dame d’Afrique. After lunch, you will visit the National Museum of Antiquities and Bardo museum. (B,L,D)

Enjoy breakfast at your hotel this morning before setting off for an early drive to Setif. Sétif’s history goes back to Roman times, during the reign of Emperor Nerva between 96 and 98 AD. Parts of a cemetery were uncovered in the 1960s and a small section of the Roman circus built in the settlement remains visible, but sadly no attempts were made to preserve these historical treasures.

Spend time exploring the museum and after lunch, you will visit the archaeological site which is sure to leave you speechless at its beauty and also to simply see how well it has been preserved before checking into your hotel. (B,L,D)

After breakfast, drive to Constantine. This city is one of the grand spectacles of the north, made by nature but embellished by man. Over time, the Oued Rhumel carved out a deep gorge around an outcrop of rock, creating a natural fortress that was already occupied in Neolithic times. Since then Constantine (Cirta as it was known in antiquity, Qacentina as it has also been called) has always been a city of political, cultural and economic significance.

The Numidians made it their capital and after Julius Caesar defeated the army of Juba I at Thapsus, it remained the capital of Roman Numidia. The Romans destroyed the city after a rebellion in AD 311, but the Emperor Constantine then gave orders for it to be rebuilt – and renamed, using his name.

The French writer Alexandre Dumas called it ‘a fantastic city, something like Gulliver’s flying island’. The sense of fantasy has still not left it, for however much building has gone on around, the heart of Constantine remains on that upland shelf, reached by bridges. It is a cosmopolitan place which, over the centuries, has attracted traders, as well as invaders, from around the Mediterranean including Jews from France and Spain, Ottoman Turks, Genoese and others. From the 16th century, after the Turks conquered much of what is now Algeria, Constantine – Qacentina – became an important, independent beylik, and even after the last bey was chased from his palace by the colonising French, the bey continued the struggle from elsewhere in the region until resistance became impossible, for a while. On 8 May 1945 (a date commemorated in street names across the region) it was here, and in neighbouring Sétif and Guelma, that the independence movement started.

You will explore the 6 bridges including the Roman Kantara Bridge. From here continue on to see the ruins of the Antonian Roman Aqueduct and the Great Mosque of Constantine. A visit to the Kasbah is a must as well as the 19th century Ottoman Palace of Ahmed Bey and Constantine’s Museum. (B,L,D)

After breakfast, you will drive to Batna where you will have a brief visit of Madghassen, a royal mausoleum-temple of the Berber Numidian Kings before continuing to the archeological site of Timgad – the ruins of the largest Roman settlement ever built in North Africa. Here you will visit the museum which houses excellent mosaics. Following lunch, drive to Algiers. The remainder of the day is yours at leisure. (B)

Overnight at the Ibis Hotel or similar

This morning you will fly to Bechar which lies on the northern reaches of the Sahara. Béchar’s former European quarter contains a military station and has modern buildings, while the traditional quarter has covered, narrow streets. Surrounded by date-palm groves watered by the Wadi Béchar, the town is noted for its leatherwork and jewellery. (B)

Overnight at Saoura Hotel or similar.

After breakfast, drive to Beni Abbes, exploring the dunes that surround the oasis. Visit the Sahara Museum and the typical clay fort of Charles de Foucauld who installed its first “brotherhood” in 1901 and is still occupied by monks of the order. In the oasis, you will also visit the old Ksar. (B)

Overnight at Saoura Hotel or similar.

This morning it is an early drive to Taghit, an discovered jewel of Algeria. En route, visit the Igli oasis. On arrival at Taghit, visit the caves situated on the cliffs of Taghit and the old Ksar Taghit. The village is an old mud-brick town that meets the modern side of the village which is slowly developing. This is all set in between green palm groves.  Enjoy lunch here before continuing to Bechar where you will fly to Oran. On arrival, you will be met and transferred to your hotel. (B,L,D)

After breakfast, it is time to explore Oran. Oran is beautiful coastal city mimicking the French Riviera town of Nice with its French colonial style buildings. Enjoy a city orientation tour where you will visit La Cathedrale du Sacre Coeur and Santa Cruz Fort.

Fort Santa Cruz sits on Mount Murdjadjo around 400 metres above sea level. The fort was built by the Ottomans and Spaniards in the 17th century in a strategic location overlooking the city, the Mers El Kébir port and the Medeterranian Sea.

There is a magnificent castle and chapel on site, as well as a massive statue of the Virgin Mary. The statue is said to be a replica of the one at Notre Dame de la Garde in Marseilles. (B,D)

After breakfast drive to Tipaza. Here you will spend the afternoon exploring the ruins of Tipaza and discover the history of the ancient civilisations in Algeria. What makes the ruins of Tipaza so extraordinary, is the fact that it not only showcases the architectural style of one group of rulers, but shows the influence the Phoenicians, Romans, Byzantine and Christians had on the construction of this lost city and the role they played in the development of Algeria.

Continue on to Cherchell with a visit of Cherchell Museum. The Cherchell Museum houses what are widely considered to be the some of the best examples of Roman and Greek antiquities on the African continent. Cherchell was established by the Carthaginians in the 4th century BC and was captured by the Romans in 25 BC who made it into the capital of the Mauritania province, naming it Caesarea in honour of Caesar Augustus. The town was ruined by the Vandals in the first century CE and later restored to its former grandeur by the Byzantines. A series of conquests by various invaders saw Cherchell change hands a number of times before becoming a French territory in 1840. Many artifacts from these various periods of Cherchell’s history have been uncovered by archaeologists, a large number of which are on display in the Cherchell Museum.

Return to Algiers this evening. (B,D)

Overnight at the Ibis Hotel or similar.

Today is yours at leisure until it is time to transfer to the airport for your onward flight. (B)