Destination fads come and go. New destinations trend as the next up and coming place to visit, ushering visitors to their shores promising of exciting new experiences to be had, new monkeys to hold, new food to taste, hotels to try and pools to swim in. Airlines coincidentally launch new flight schedules as if to tell you, hey, we are now flying here so this is where you must now go! What about if you don’t like to be dictated to and instructed or persuaded on where you would like to travel to? Are you one of those travellers like me that likes to make their own way and create their own path? If this sounds like you, read on and add these lesser known places to your travel schedule before the rest of the world follows suit.

Also known as the Trolls Tongue, Trolltunga is situated about 1100 metres above sea level and boasts some of the most spectacular scenic cliffs in Norway. The best way to take in this breathtaking view is to take a hike through the mountains, however get your bag packed as a full return trip to Trolltunga and back takes around 8-10 hours in total, so best to ensure your fitness it up to scratch. Best time for hiking is between June and September.

The Marble Caves have been given the title of the most beautiful cave network in the world. With a 6000 year old sculpture carved out by the crashing waves of Lake General Carrera and intricate caverns made of solid marble surrounded by the glacial Lake General Carrera that spans the Chili-Argentina border, who could argue that title. The lake’s azure waters are reflected onto the cave interiors in a beautiful swirling pattern. This is definitely one of those places off the beaten track and while it is not one of the easiest places to get to, when you do arrive the reward is spectacular. Best time to travel is from October to April.

Located on the frozen lagoon of the Svínafellsjökill Glacier in Skaftafell, the centuries old ice coming down the slopes of Öraefajökull has metamorphosed into highly pressurised glacier ice that contains almost no air bubbles. This lack of air means that the ice absorbs almost all visible light apart from a blue fraction. The brilliant blue ice can only been seen in winter after long periods of rain, so best time to visit is between November to March.

Nestled in the Indian Ocean, the Socotra Islands are the jewels of Yemen showcasing unique botanical and zoological treasures that have been nurtured by many generations of Islanders. It is one of the few places left where the people live in harmony with nature and is home to hundreds of plants found nowhere else on earth.  It is a must place to visit for those interested in eco-tourism with the best time to go in April, May September and October. Travel with Crooked Compass to Socotra in 2016. Click here for further details.

Located 40 minutes south-east of Siena between the volcanic peaks of Mount Amiata and San Filippo, the hot springs found at Fosso Bianco is the perfect place for year round swimming in a stunning location. This series of hot pools also boasts special limestone formations which have inspired names like ‘the white whale’ or ‘the glacier’. For a truly magical experience get there early to watch the sunrise and you might even get the place to yourself!

This spectacular canyon, which forms a border between the Aples-de-Haute-Provence and the Var, is up to 700 metres deep and varies in width between six and 100 metres at the bottom and 200 to 1500 metres at its rim. Considered as the most beautiful canyon of Europe it has been a natural protected site since 1990. This is a year round destination and you can take in the scenery by going white water rafting, kayaking or hiking.

Rising 2462 metres over the Bicol region, the Mayon Volcano is a stratovolvano known for its almost perfect symmetrical triangular shape and is one of the world’s most active volcanos. In fact it has erupted 47 times in the past 400 years. A photographers dream, you can see the glow of the bubbling lava at dusk on an active day. For those people up for something more daring you can climb all the way up to the volcanoes crater.

Off the tourist tracks a little and no where near the number of tourists that the more famed Inca Ruins recieve are the ruins of Inca Rumicucho which cover the period of the fifteenth century. Pre-Inca construction at the site was established for military purposes. This site also performed ceremonies and worship the Inca sun god. The fortress is 600 metres long and 135 metres wide and 25 metres high. It consists of five terraced pyramid-shaped stone. Built with archaeological materials such as andesite stone, mortar and gravel ground pumice reveal Inka. It is believed that the inhabitants of this area dedicated to weaving, as they have found hundreds of tools produced in bone mainly textiles flames.

Buddhist complex Maytszishan is little known. It is located in Gansu Province in northwest China. This is a striking architectural complex, carved out of the rock. Maytszishan has 7,000 Buddhist sculptures and nearly 1,000 square metres of murals. Maytszishan is just a few miles south of the Great Silk Road. Many of the monks chose to stay in these caves and work there. One of the earliest written records about this are found in the biographies of the two monks Tanhonga and Huanggang, who meditated there with his disciples.  Huge Buddha is almost parallel to the side of the mountain – the highest is more than 16 metres in height. Stairs that lead up and around the caves were originally made of wood, but since have been fitted with metal supports, for security purposes.

Standing near the edge of the continental shelf, the Poor Knights Islands are the remnants of an ancient string of volcanos. Soaring hundreds of feet in a vertical forest, the rocky cliff faces also plunge deep into the water at depths as great as 100 metres. The Knights Islands are also surrounded by beautiful sea life with the area becoming a nursery area for sub-tropical fish species establishing themselves amongst fish life. The water is a brilliant display of colour as the fish adapting new colours and feeding habits in the New Zealand waters.

Looking for more ‘Lesser Known’ destinations to include in your travels or want more info on the above? Download and search the Crooked Compass Travel App for inspiration. 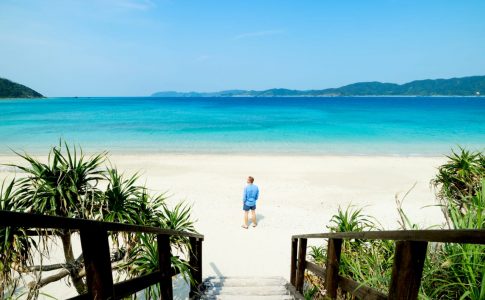