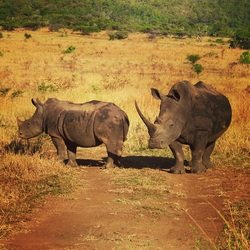 Checking into my glass cubed room at &Beyond Phinda Forest Lodge, I am greeted with a welcoming personalised, hand written note. My oversized king bed looks small in the vast room, 360 degree views surround my floating glass box. This is truly what I would call Zen Zulu.

This eco-friendly property, located in the north of Phinda’s Private Game Reserve, is situated within the sand forest region of the park. Rich with a high diversity of flora and fauna, a prolific bird-life and Rangers with a true and honestly raw passion for their work. “Listen…” a pink pelican flies high overhead. “Can you hear the wings?” our humble but extremely knowledgeable ranger whispers with pure passion in his voice as he stares in sincere fascination at the large bird above, his eyes never leaving it for a second.

Inyala’s are tucked behind bushes surrounding my room. Giraffes slope past as I indulge in afternoon tea on the deck overlooking the grassy plains. Beginning the first game drive of the afternoon, we weave our way through the woodlands of Torchwood and Fluted bark trees. Past a lioness hunkered down in the grass, reed buck pop their heads up as we roll through the marshy wetlands following some splayed hoof tracks. Our tracker is perched on the front of our 4X4, his eyes darting from left to right, sharp and focused. We are in search of the elusive Rhino.

Whilst taking in the surrounding beauty, we learn of Phinda’s Rhino Conservation program as a mother and baby White Rhino come into view. They are magnificent. Long slender horns, bulky, chunkified square bodies – picture perfect, and they are only metres from our vehicle.

We observe these iconic and oddly graceful mammals in awe as we listen to our ranger.

&Beyond Phinda Private Game Reserve was the first private game reserve chosen to be part of the Black Rhino range expansion project in conjunction with WWF.

Phinda Private Game Reserve is 23 years old, and in Zulu translates to ‘the return.’ It was the first company within South Africa to re-introduce cheetah, lions, elephants, and black and white rhino into the Zulu wilderness, signifying the name. They are proud to have the best anti-poaching record in all of South Africa, having only lost three rhinos in the history of the reserve.

Conservation is no fairy tale we learn. It is always short of funds, lack of support and faces many political barriers. At the end of the day, the common cause is worth the tireless and often unrecognised efforts to attempt to conquer the world’s insatiable demand for ivory, all for the sake of a trinket on someone’s mantelpiece.

As the sun sets, the sky remains illuminated. It is a full moon. A poachers moon. We watch as the two rhino’s before us forage in the dry grass and move slowly into the brush. Their horns illuminated by the shine of the white moon.  Phinda employs 40 anti-poaching staff to help control the poaching ‘gangs’. Previously thought of as the poor villagers poaching for money, it has now been identified that poachers form more of a gang underworld minority with no-one, not even the poachers knowing who the ‘top-dog’ is.

These poachers previously carried AK47’s and would simply spray the poor rhinos with bullets, sometimes still leaving them alive after their horns and large portions of their faces and jaws were hacked off, leaving these great beasts completely mutilated. Now, due to the hard work of anti-poachers, they have to be smarter, quieter and quicker. They carry an axe and rifles with silencers and provide one swift shot to the head.

Rhino’s are gentle creatures of habit allowing them to be tracked easily which often results in an appalling conclusion. These poachers are ruthless, sneaky, disgusting and pure evil. If the poachers are aware of a rhino drinking location, sometimes they will even poison a whole water hole which will kill anything that drinks from that source. The poison used is called ‘Two Steps’ as the poison is so potent the animal drops dead within 2 steps from the watering hole. There seems to be no remorse what-so-ever. Don’t these poachers have souls?

Even if a rhino only possess an inch of a horn, these heartless poachers will still take down the rhino. If caught, poachers are taken to court where they face a losing battle and are sentenced to 10-15 years in prison. Many conservationists do not feel this is steep enough. Unfortunately, this is a wildlife crime and not a human crime so authorities don’t currently feel the need to do anything more. If a poacher resists arrest, rangers are permitted to shoot.

A more recent discovery and revelation as to why people are seeking rhino horns apart from the value of the ivory, is that many traditions believe that the rhino horn if ground into a powder is a form of aphrodisiac. Rhino’s mate for hours on end and as our ranger quotes, “As far as I can see, the only benefit would be if you were to strap it on.”

This poaching business is all about money and corruption. The parks in the eastern regions of South Africa are particularly at risk with the parks surrounding Phinda losing eight rhinos in two months. Due to the proximity of the parks to the Mozambique border, it is easy to slip into Mozambique. Simply pay off someone at security with R30,000 and they will turn a blind eye. The corruption in the world of wildlife is sickening.

Amongst the pure luxury and unsurpassed level of service found within my setting at Phinda, the lack of remorse and cruelty of these poachers breaks my heart. It’s such a complex world we live in where humans can be so torturous and inhumane whilst the efforts and achievements of conservation parks like Phinda seem to slip under the radar a little too much for the exhaustive efforts and energy they inject to wildlife conservation. These anti poachers who’s passion and life’s work is to protect the rhinos; walking the game parks on nights like this where there is unfortunately what is called a ‘poachers moon’. With death as the price, sadly they cannot win every time. These strong and passionate individuals provide some hope and optimism so that we can truly ‘Save the Rhino’ and the fight goes on.

Rhino and calf trailing at sunset