Uganda, green and lush – the Switzerland of Africa. Terraced hills lined with tea plantations, women bent over hard at work plucking the vibrant tea leaves ready for processing. Uganda is like a pacific island. Hot, wet and humid with little mud huts and thatched roofs scattered across the land towered by banana plantations and gentle swaying palms. Agriculturally rich and very tropical. 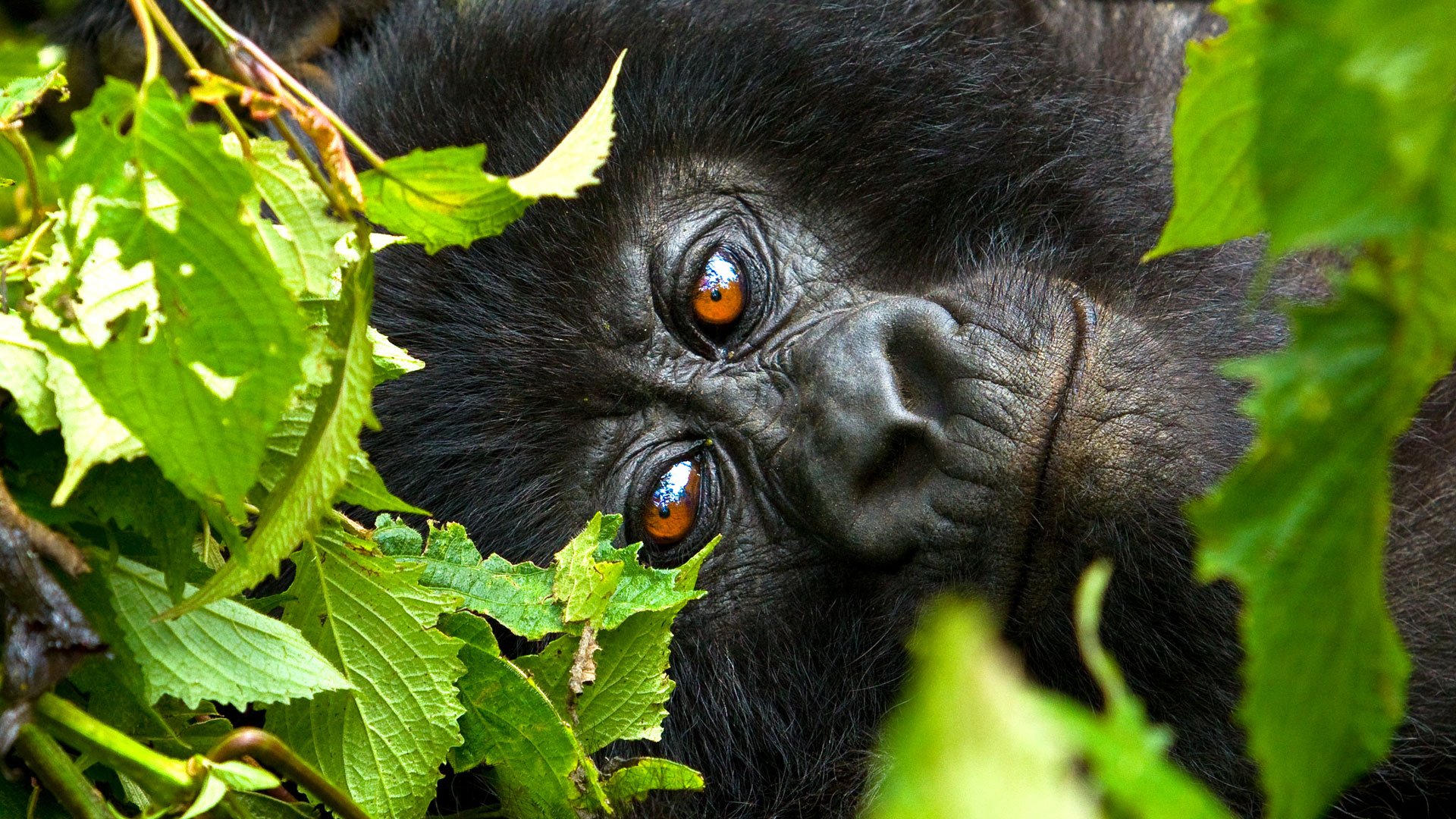 The purpose of my visit to Uganda was to track the Mountain Gorillas. Where to start with describing this? It was out of this world, so exhausting but so unbelievably rewarding. The morning began with a 4am drive so that we could begin our trek by 8am at Bwindi National Park. Accompanied by an experienced  local guide and a ranger carrying an AK47 for protection, we reached our starting point and were greeted with the cheeky smiling faces of young village children dressed in rags and oversized tourist clothing who were all keen to give us high fives and were fascinated with our technical looking camera equipment.

With hiking sticks in hand we began our decent down to the rushing river below and into the dense jungle opposite. After a few slips and slides down the cliff face, and a great quad work-out, we reached the flowing muddy river. We crossed rickety bamboo bridges our guide constructed for us, crossed fallen tree logs and clutched desperately to vines. Making it to the other side relatively dry, we began our hike uphill (and I mean vertically uphill – not a gentle slope) into the thick jungle.

We climbed this mountain by grasping onto vines and branches, anything that was within reach to help keep us stable and upright. Slipping and sliding on the dense wet foliage, our feet constantly entangled in straggly vines with nettles and thorns taking advantage of our exhaustion. We hauled ourselves up by clutching at plants and digging for roots strong enough to hold our body weight. Completely saturated with sweat, hair dripping, clothes soaked to the point I could ring them out. It was nearly midday and we were told if we didn’t find the Mountain Gorillas by 3pm, we would have to turn back. We reached the location they were 3 days ago and a little while later, where they were the day before. We began following their destruction trail of chewed and flattened foliage as well as their droppings path.

After trekking for over 3 hours and near complete exhaustion in this humid, sheer faced jungle (I like to think of it as Uganda’s mini Kokoda trail), we were told to keep our voices down and that the Mountain Gorillas were less than 200m away. We left our bags and sticks with the trackers who hacked their way through the trees with their machetes for us and there they were… The first Gorilla we saw was the back of a massive Silver Back. Huge is an understatement. He sat there happily undisturbed chewing on the branches. To the left was a small fluffy baby playing and eating and to the right were several black backs, 7 females and a tiny, tiny baby clinging to its mothers back. They ate and moved around completely ignorant to our presence and suddenly there was a small gorilla dangling in the branches above our heads.

Their faces carved with creases and etched with expressions and emotion that were so human like. Their eyes gazing around casually and watching over the young. Their hands, so like ours, but cover in trendy black leather gloves. Their movements, so defined and human-like. They possessed so many characteristics that were almost a mirror to our own actions. It was uncanny and almost mind boggling to see the similarities so up close and personal. It just blew you away.

As they continued moving, we followed and watched these magnificent mammals in awe. We came across another Silver Back, this one about 5m away from us, sitting there munching away, with a mother and baby right in front of us and another silver back to our left. We were completely surrounded. Suddenly, the Silver Back to our left came charging towards us. I was in the front and if I had put my arm out I could have touched him. He was less than half a metre away from us. Teeth bared and eyes fierce, a low growl echoed through the forest. We all crouched down in submission as we had been instructed to do to show that were are no threat and after getting no reaction from us, he just turned his back on us, showing us his huge booty and went on his merry way.

A few moments later one of the females came into view and started chomping and crunching loudly on some nearby branches. After our trackers hacked at some more branches and shuffled us like mountain goats towards the beasts, this female  was not happy and came charging towards us bearing her disgusting yellow and razor sharp looking teeth, her brow furrowed with concern. She was not a happy chappy and came within about 20cm of us. Our guide had to chase her away. We then watched one last Black Back rolling around in the green leaves before our hour with the gorillas was up. 19 Gorillas, 3 Silver Backs, 3 charges and an extremely steep and long walk back. Going down the vertical hill wasn’t too bad apart from the fact that most of us slid half way down and ended up being covered in mud with one girl ending up upside down with her leg wrapped in a vine! We reached the river and one had one casualty as one of the girls fell in from exhaustion and then it was time to climb the mountain again.

It was sweltering hot in the sun and there was no shade from the suns harsh rays burning into our backs. This climb was a huge struggle. Exhaustion, mixed with humidity, mixed with a vertical dirt mountain face with no trees, branches or vines to hold on to. We really were mountain goats now. Finally, out of breath, shakey legs, saturated in sweat and crippled with cramping feet, we made it to the top and were greeted with small kids and adults alike singing, clapping  and dancing for us. We were given our certificates stating we had seen the gorillas and that we had “penetrated the impenetrable”…. jungle that is. After a 6hr trek, we were piled in a sweaty heap into our mini van, speechless at the most indescribable, absolutely fantastic, lost for words experience that we had just witnessed.