The nation we know as Iran is home to one of the oldest human civilisations and was the focal point of the Persian Empire. Going back to the sixth century BC, the Persians occupied a colossal territory that covers Northern Africa, Turkey, portions of the Middle East, Afghanistan, and Pakistan over to west India. Human civilisation in Iran goes back to the Lower Paleolithic period (more than 800,000 years prior), which is demonstrated by numerous archaeological finds.

The Persian Empire was established by Cyrus the Great and decided a tremendous zone that extended from southern Europe to India. The central location of Persia made it a focal point for numerous intrusions and much disturbance over its history. Amid the seventh century, the Arabs arrived, trailed by the Turks in the eleventh century, the Mongols in the thirteenth century and lastly the Ottomans. These changes have had a major influence on the region and have created Iran we know today, remainders of the different occupations are still evident. 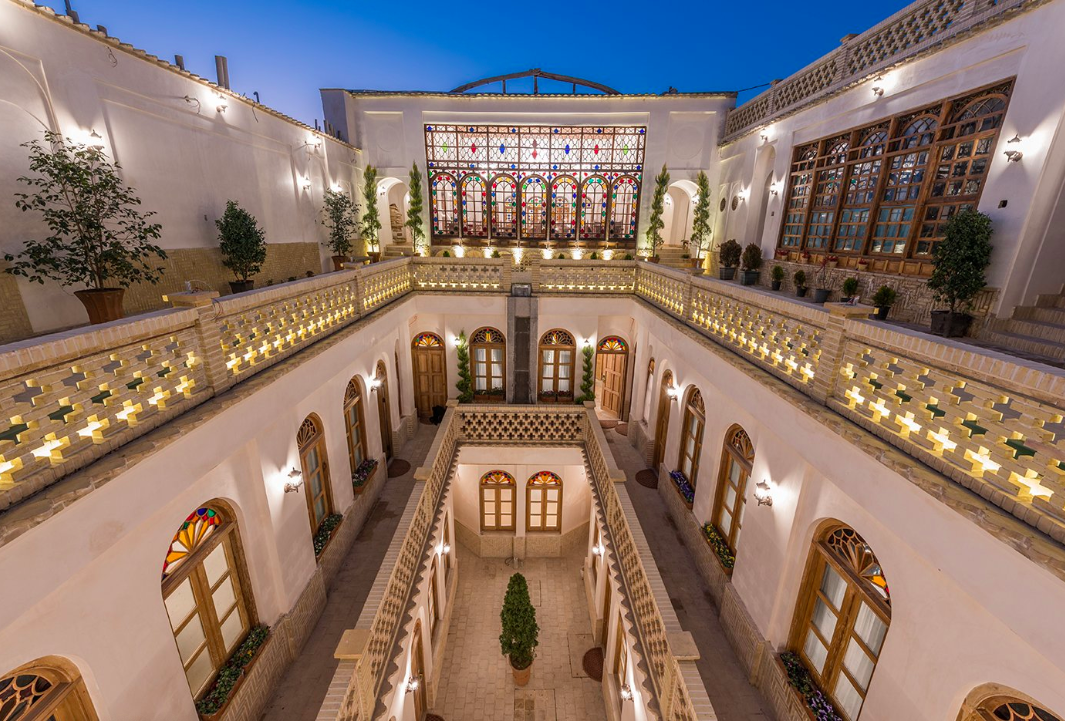 One of the requests we often get at Crooked Compass is for ‘authentic accommodation’. Visiting a new destination, or revisiting an old favourite, you want to make your stay inside the hotel as enjoyable as your time spent outside of it. What better a way to immerse yourself in the local scene than to spend the night in a historical manor that has been turned into boutique accommodation. On another note, you haven’t had hospitality until you have visited Iran. Iranian Hospitality is without a doubt the best part of travelling to Iran! 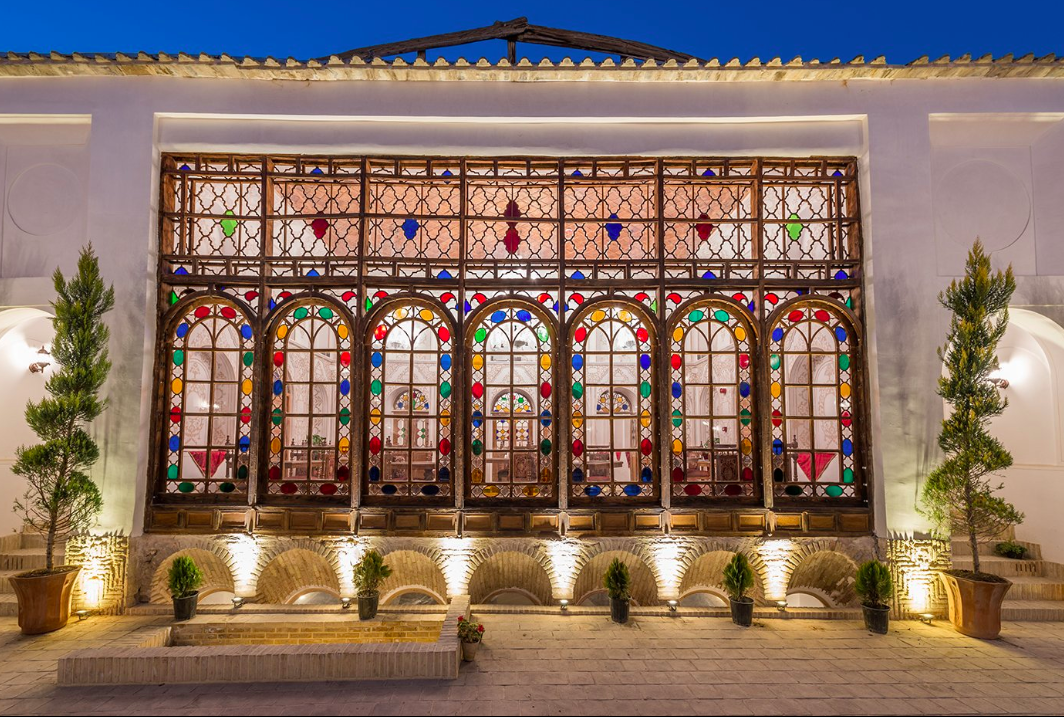 Travellers traversing Iran in the Silk Road trading days would usually spend the night at a caravanserai, to rest, sleep and eat after a long journey through the desert with their animals. Built in a distinct architectural style, caravanserais are said to have been the first types of hotels in ancient Persia and were reported 2,500 years ago when Persia was ruled by the Achaemenid Empire.

Located about 30 minute drive from Yazd, Zeinodin Caravanserai is a unique place to stay and often a highlight of any travellers Iran adventures. As a former site where camel trains would stay for the night, the accommodation surrounds the inner courtyard and the furniture is rustic. The rooftop (or lack of) provides a perfect place to view the night stars and also take wonderful sunset and sunrise photos. Zeinodin Caravanserai looks like it is right out of a movie set, except it is real and authentic!

Best described as a remarkable living example of Iranian culture and art, this 250 year old mansion is located in the Kooshk-e-Safi quarter, one of the oldest quarters of Kashan. The 1000m² house, which is constructed on the “flower bed ditch” model, is in fact the exterior part of an immense house which lost its interior part and other annexes over time.  After a seven-year restoration project, this magnificent piece of architecture has emerged as one of the rare traditional residences. In order to preserve the original architecture, it has been repurposed as a boutique hotel in the form of five different spaces including the “Upper House”, the “Veiled House”, the “Hidden Chamber”, the “Resting House” and the “Private Chamber” along with other facilities provided in the “Mirror Hall”, the splendid “Parlor”, the “Banquet Hall”, the “Beverage Room” and the “Cistern Cellar” to serve those who have chosen Kashan as a travel destination.

An extensive collection of delicate artistic detail will fascinate those with an interest in design – cellars, the three door chamber, the five door mirror hall, stained-glass windows, magnificent stuccos, mirror works, and paintings have turned the building into a museum of the works of Kashan’s great masters of art.

Ghasre Monshi Palace is a remainder of Ghajjar Dynasty from the early 1820’s. Providing an unforgettable Iranian experience in a beautiful Persian ambience, this hotel is also historically significant as it was one of the second Shah (Qajar emperor) of Iran, Fatahali Shah, few houses in Isfahan. Undergoing a major renovation and restoration with the supervision of Isfahan’s Cultural Heritage Organisation to ensure preservation of its historic resemblance and values, Ghasre Monshi is a proud example of Persian culture and history. 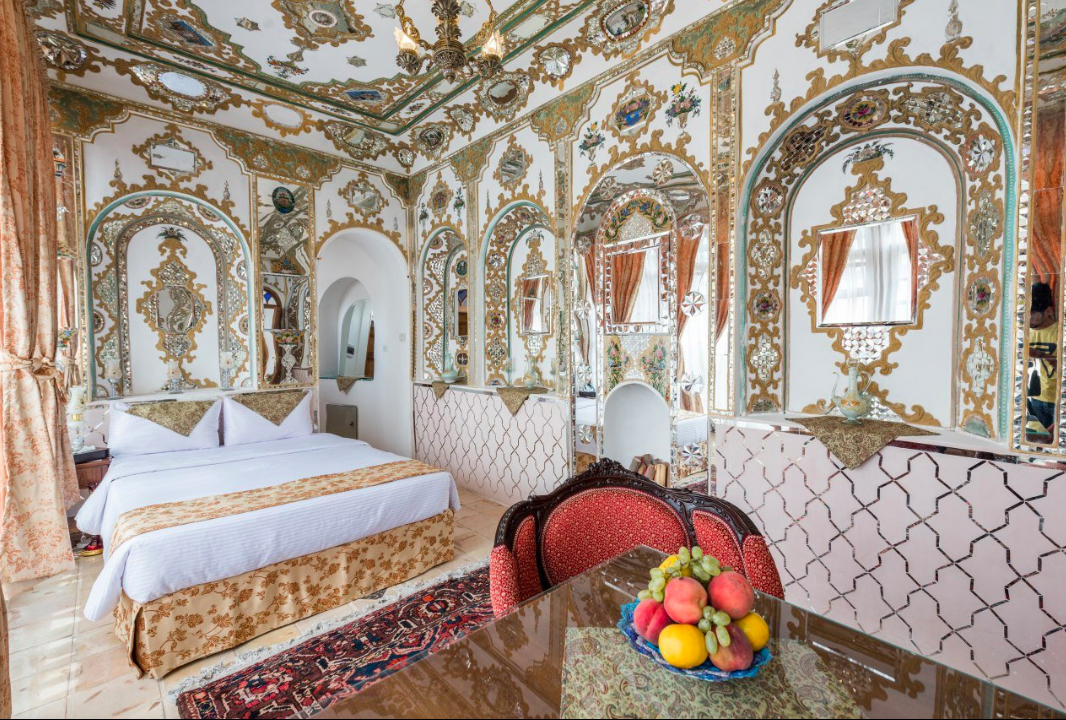 The hotel is located conveniently in an area very close to the many historical sites in Isfahan. The Ghasre Monshi Alley connects the Ghasre Monshi Palace to the famous Isfahan Bazaar, a part that is home to handmade artefacts; many of Isfahan’s artefacts are handmade in the stores for everyone to see. On the alley, there is a Zurkhana, or a traditional Persian gymnasium. All of this is just 20 steps from your front door. The locale is historically significant because as the economic centre that all Bazaars connect to, it also holds religious symbols, as it surrounds the Aliqapu Mosque. 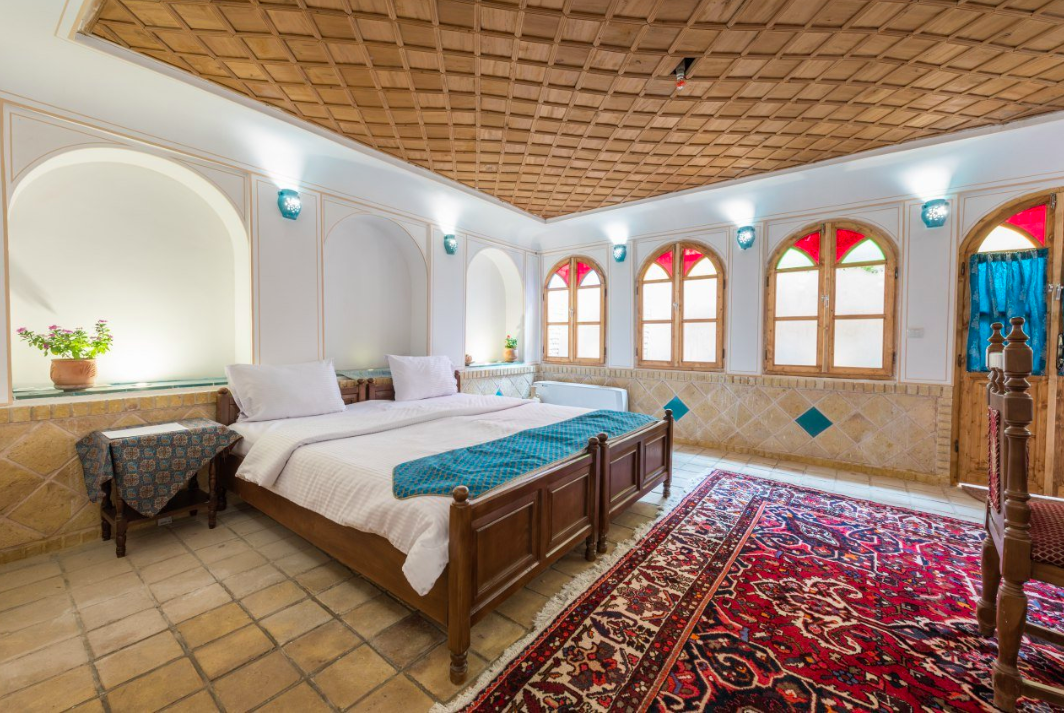 Join our small group tour, Iran In Classe, to experience Iranian hospitality for yourself at these three unique hotels. Make this experience yours – Contact Us today!