Hidden in the world's longest continental mountain range, the Andes, is one of Peru's best kept secrets. The rainbow coloured Vinicunca Mountains. Trekking to this spectacle, you will be treading through one of the wildest and rarely visited regions of Peru, and the crown jewel in the Andes. Explore low alpine valleys, traditional Peruvian villages still rich in tradition and remote Andean culture. Snow capped peaks will tower over you, herds of llamas, glaciers and turquoise lakes will encapsulate you.

Condors will soar above you, pumas and bobcats will dart past. Bathe in hot springs along the way. You will circumnavigate the massive Ausangate Peak before reaching the breathtaking geological features of the 'Rainbow Mountains'. The landscape looks like it has been painted with a brush. Red, orange, ochre, turquoise and blue create an unforgettable sight.

Combined with a fascinating and educational few days with remote Sacred Valley tribes, you will learn and witness their customs and traditions. From cocoa leaf ceremonies, to traditional dance and story telling under the stars, this is a journey that you will not forget, as you uncover the hidden secrets and beauty of Wild Peru. 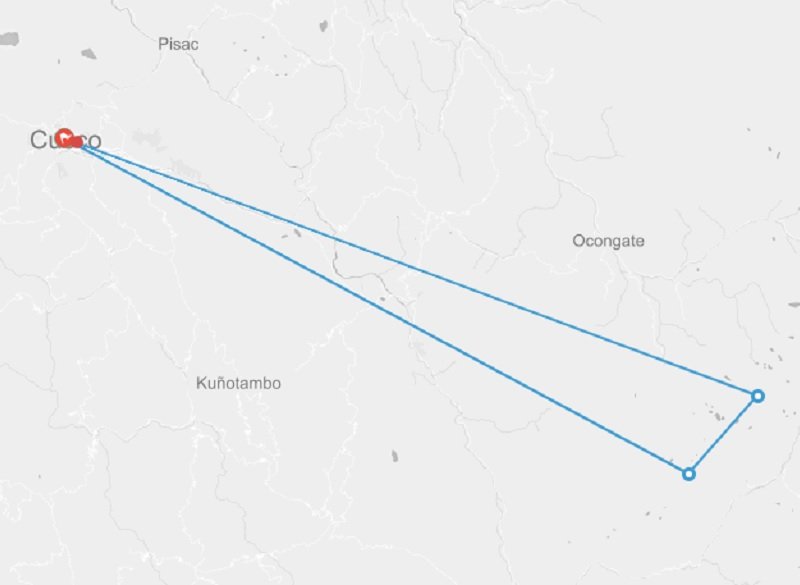 Welcome to Peru! Upon your arrival in Cusco, you will be met at the airport and transferred to your hotel. The remainder of the day is yours at leisure as you acclimatise to the altitude.

Following breakfast this morning, you will be picked up from your hotel in Cusco and transferred to Patabamba Community, its original name, Patapampa, meaning ‘plain’ or ‘flat place’ in the Quechua language. You will arrive at Patabamba community at approx. 8am and witness a coca leaf ceremony that is undertaken by scholars.

At 9am, you depart from Patabamba and head to Huchuy Qosqo archaeological remains. Located at 3,550m, the name comes from a Quechua word which means Little Cusco, however it was also known as Q’acyacawana which means in Spanish ‘place from where we can see thunder’. Historically, it is known for being the place of Inca Wiracocha, who died there according to legend. In colonial times, a mummy found was assumed to be Inca, and was burnt by Francisco Pizarro.

During the walk, you will enjoy Inter-Andean valleys typical of the region, with impressive viewpoints over the Sacred Valley of the Incas. After a midmorning traditional style snack, explore a part of the Inca trail which is also part of the Q’apac Ñan. In the village of Pukamarca, you will be able to take a break and enjoy a lunch box prepared by Patabamba Community members. Continue walking until you reach the archaeological remains of Huchuy Qosqo. From here, descend through typical flora and fauna from the region to the Huchuy Qosqo Community, arriving at the lower part of the Community before crossing to Lamay Qosqo, where you will see the differences between the two communities. (B,L,D)

2 nights in Huchuy Qosqo Community in a rural homestay

Early this morning, taste a local breakfast with the Huchuy Qosqo community. From here, you make your way to the Huayllafara Community, where you will be welcomed at the Cultural Centre for Interpretation with traditional music and beautiful flowers together with a ‘tinka’ – a symbolic benediction to Mother Earth to thank her for this new day and spending it with kindred people from different cultures.

From here, you are invited to go with the local villagers to their cultivated fields, to participate in their farming activities. Learn the connection between man and the Andean agriculture, passed down through generations. By using ancestral tools such as the chaquitaclla, cuti, lampa and others, you will experience a direct interaction with Mother Earth, known locally as Pachamama. Here you will understand the relationship between community villagers and the surrounding Andean Universe.

Experience a culture filled night on your return to the Huchuy Qosqo community, with the interpretation of stars and storytelling, accompanied by traditional music around a warm wood fire. (B,L,D)

Following breakfast with the Huchuy Qosqo community, you will continue on to the Janac Chuquibamba community, where you will be welcomed with flowers and traditional Andean music. From here, enjoy a 30 min walk to a rocky hill, where you will find many Achupalla plants. These spiny leaved plants have medicinal purposes and are also used in many ways including making cooking utensils, bags, belts and for firewood. Even the Suksakuro worm which can be found living inside it is considered a delicacy and very nutritious! Discover the mysteries and uses of the Achupalla plant, and taste the local gastronomy with products from the area.

You will finish your experience in the Andes with a traditional Earth ceremony called ‘Pago a la Pachamama’ or ‘Payment to the Mother Earth’ to thank her for our experiences and learnings.

Transfer to your hotel in Cusco. (B)

Early in the morning you will start a fascinating trip by bus through the fertile valley Vilcanota to Checacupe. You will visit a colonial temple and then head uphill to the valley of Pitumarca where you will pass through an amazing canyon called Japura which leads you to Chillca, where you will be welcomed by the local community. Enjoy a short walking tour until you reach the first ‘tambo’ (the place to rest). Once you have checked into your lodge, you will have time to rest and enjoy some typical music offered by the community people. (B,L,D)

Today you will start your trekking in the wide valley of Pampa Uyuni. You will witness some unique sights of majestic ice floes. The path becomes narrower as you come closer to some waterfalls that flow from Santa Catalina mountain. Visit the small Paloma lagoon and take in the beautiful landscape full of lamas and alpacas before passing another lagoon, reaching Machuracay Tambo, situated just at Apu Ausangate Mountain. (B,L,D)

Be sure to eat a hearty breakfast this morning. After a hard uphill to the valley of Palomichayoc, you will have a chance to absorb the unforgettable view. Descend to Ausangatecocha lagoon and take in the amazing sight of the southern part of the ‘Apu’ ice floe, which is sure to inspire you while trekking. Make your way through the unusual reddish sandy formations that belong to ‘Inca´s Snow Peak’ and overnight at Anantapata Tambo, close to a spectacular mountain. (B,L,D)

Today is one of the most fabulous parts of your trek. You will be lead along the multicoloured layers of the Rainbow Mountains. This red, yellow, sienna, grey and blue path will give you a great opportunity to study geological wonders and admire the unique beauty of this landscape. More than that, this is a perfect place to observe some groups of gracious wild ‘Vicuñas’, thought to be the wild ancestor of the alpaca, which can be seen on these lonely paths. You will overnight in Huampococha Tambo, surrounded by unusual rocky formations near the lagoon of the same name, the place where ‘Huallatas’ (Andean geese) make their nests. (B,L,D)

After the last and short uphill hike to the valley of Anta, you will gradually start descending. Soon you will see the first houses and cultivated fields. The landscape changes quickly and the reddish sandy formations take over the chalkstone mountains that make up the unique rocky woods. This is an ideal habitat for spotting the shy Viscachas. Your driver will be waiting for you when you reach the valley of Pitumarca to transfer you back to Cusco. (B,L)

Today is yours at leisure to explore Cusco. (B)

Following breakfast, you will be transferred to the airport for your onward flight. (B)