Oman is a melting pot of cultural traditions and hypnotising landscapes. Mix into this hazy heat some truly unforgettable wildlife encounters and swimming spots with a spattering of dramatic coastlines and Oman becomes a must see on any travellers bucket list. Travel by 4WD through rugged landscapes, visit quaint mountain villages and witness turtles nesting on the stunning white sand beaches. Swim in desert oases, climb colossal sand dunes and take a thrilling ride over them with our experienced drivers. Mingle with the locals in their traditional homes and explore abandoned stone villages before exploring the bustling souqs with ornamental jewellery and intricately hand carved daggers. 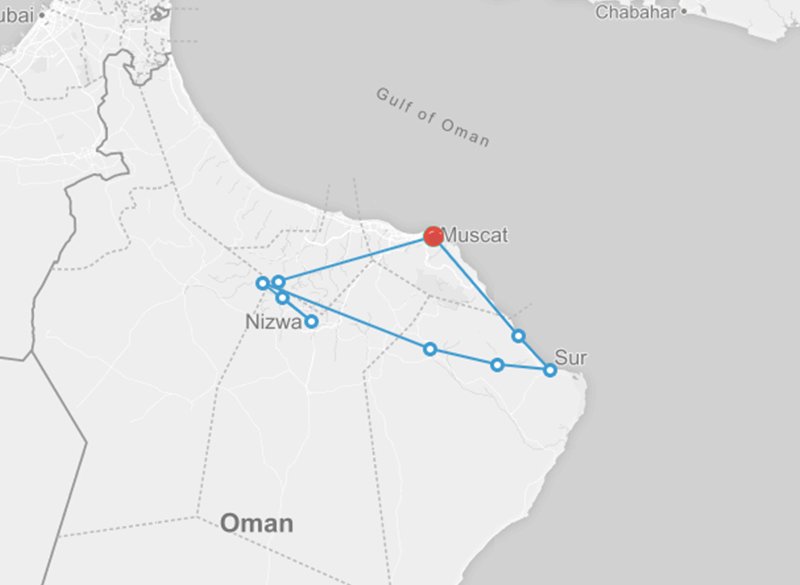 Welcome to Muscat! Upon arrival, you will be met and transferred to your hotel. Be greeted by the warm air, turquoise sea and lush city. Spend the afternoon relaxing at your hotel. This evening, you will be transferred to a local village house, Bait Al Bilad where you will try your hand at cooking the local omani cuisine. The village house is a fully restored and authentic village house on the beach of Qantab – the fishing village that lies between the Al Bustan Palace & Shangri La hotels.  Enjoy an authentic Omani cooking class with the locals and dining experience, surrounded by the jebel and the sea. (D)

Begin your day with a delicious breakfast before departing on our Muscat city tour. Your first stop will be the impressive Grande Mosque which stands exquisitely against the skyline. Once you have taken in the brilliance of the Grande Mosque it is time to head to the corniche and explore the vibrant fish market and lively Muttrah Souk. The gold souk here is one of the highlights! Bargain with the locals and see what treasures you can uncover in the labyrinth of twisting and winding alleyways. Your morning fulfilled, it is now time for an Omani lunch. Following lunch you drive to the Jebal Akhdar mountains (The Green Mountain). With its opulent groves of fruit trees flowering bushes, vines and wild juniper decorating the slopes of Arabia’s highest region. The drive up the mountain to reaches over 2000 metres above sea level is a must to experience while you’re in Oman. First you visit Wadi Bani Habib and its abandoned village. It’s set on the side of the mountain in an area of very lush vegetation. In the wadi the vegetation is full with flowering bushes on rocky floors (Grand Mosque is closed for tourist visit on Thursday, Friday & any local holiday) (B, L).

Following breakfast, take a walk under the trees with your guide as you are lead to a village with atmospheric mud houses that look almost like something you would see in Yemen. Their giant walls made from piled stones. Here you are surrounded by greenery and the water running in the Falaj is ice-cold.  After exploring the wadi, head to Diana’s Point, named after the late Princess of Wales who visited the area in the 80s. The terrain on the last section is fascinating with black rocks and gnarled shrubbery; the rocks are full of marine fossils. Opposite Diana’s Point is the view of the terraced farms of the Jabel, with full deep greenery that is rarely seen.

From here continue onto Nizwa, the heritage capital of Oman that is famous for its Round Tower Fort, built in the 17th century, and the souq with its Friday cattle auction, ornamental silver jewellery and intricately hand-carved ‘khanjars’ (daggers). There on we move to visit Jabrin, built in the late 17th century and the finest of Oman’s castles, became a seat of Omani learning. The castle displays the highest achievement in Omani ceiling painting and has beautifully executed woodcarvings. On the way to Jabrin we will stop at the historic town of Bahla, encircled by a winding wall and is famous for pottery as well as a large fort which is included on UNESCO’s world heritage list and finally we head for Jebel Shams, the highest peak in the Jebel Akhdar range. Here we enjoy the spectacular views over Oman’s 1000m-deep equivalent to the Grand Canyon. (B,L,D)

Enjoy breakfast this morning and the chance to go for an amazing walk which follows the rim of Wadi Nakher and leads to the old and abandoned village of Sab. (The hike will take you around 5 hours and is not too difficult. After lunch, descending from the Green Mountain, you will stop in Misfah, a pretty mountain village with stone dwellings carved into the mountainside. Here you will overnight at the truly authentic Misfah Old House. (B, L, D)

Following breakfast, you make your decent and visit the Women’s market in Ibra which is held every Wednesday. After lunch we drive to the magnificent Wahiba Sands which are vast mass of red and white sand with dunes rising up to 200 metres, which also host a variety of flora and fauna. Have your own sand bashing fun with our well experienced driver riding the dunes on the way to the camp site. (B, L, D)

Breakfast this morning is at your camp site. Later this morning you will visit one of the local Bedouin houses to drink some Bedouin traditional coffee and to learn about their lifestyle. Your guide will explain to you the relationship between the Bedouins and the camels. Continue driving to Wadi Bani Khalid with its small pretty villages embedded in the mountains. The deep blue-green waters are ideal for swimming before continuing towards the Turtle trail. Lunch today is at the oasis before driving through the coast of Al Ashkhara crossing through some small fishing villages until you reach the town of Ras Al Hadd, the home for the giant green back turtles. Your hotel in Ras Al Had provides you with more than comfortable accommodation, so why not have a quick power nap. Later that evening you will be guided down to the beach of Ras Al Jinz for an unforgettable evening. Your breath will be taken away as you watch giant sea turtles make their way slowly up the beach to within metres of where they were hatched, up to 50 years before, to continue the legacy they have inherited. The beach is one of the largest turtle reserves in the world so make sure that you take everything in for this once in a lifetime opportunity. Your curiosity filled, you can stroll back to the hotel to the sound of the small Ghost crabs scuttling across the beach scavenging for food. Enjoy a good night’s rest, you have earned it! (B, L)

Heading back towards Muscat today, you bypass the town of Sur, make a brief photo stop at the old Dhow Building (traditional wooden boat) before reaching the coastal road. Your next stop will be Wadi Tiwi with its lush green plantations, where emerald water flows all year round. Drive further to is the Bimah sinkhole, a spectacular limestone crater with blue-green water at the bottom, have refreshing swim and lunch before whisking back to Muscat where you tour ends on arrival. (B, L)