Rediscover the Kingdom of Jordan as you explore ruined Roman cities, elaborate Crusader castles, desert citadels and powerful biblical sites. Journey through the timeless desert and sleep under a blanket of stars as you learn the Bedouins way of life. Trek through some of Jordan's lesser known landscapes to witness the raw natural beauty of a country bursting with the history of ancient civilisations.

Venture on foot through the heart of the mountainous Dana Biosphere Reserve, home to one of the top eco-lodges in the world, where you can witness first hand the efforts of the partnership between EcoHotels and the Royal Society for the Conservation of Nature, who are devoted to the protection of the Kingdom’s finest natural landscapes. 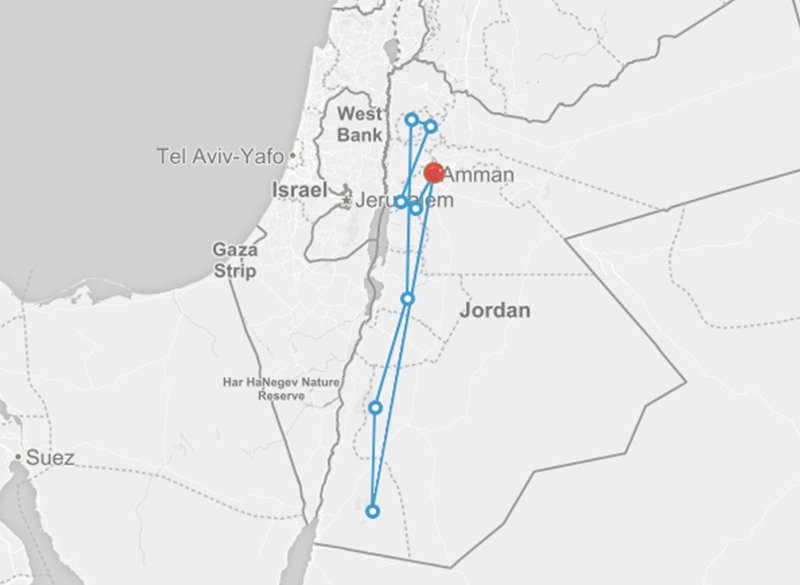 Welcome to Jordan! Upon arrival, you will be met and transferred to your hotel in Madaba. The remainder of the day is yours at leisure.

The welcoming town of Madaba is a market town best known for a collection of Byzantine-era mosaics. The most famous is the mosaic map found on the floor of St Georges Church which you will check out tomorrow.

Spend the afternoon exploring the lively streets on foot, with shops offering everything from pots and pans, shoes and fresh vegetables, to skinned goats!

After breakfast, visit the famous mosaic 6th century map of Palestine in St. George’s church. From here, you will continue on to Mt. Nebo, the place where Prophet Moses gazed at the promised land before he died and is alleged to be his burial place.

Your next stop is Hammamat Ma’in, an exceptional place in Jordan showcasing an amazing natural setting. The mineral rich waters that feed the 109 hot and cold springs in the valley originate from winter rain falls in the highland plains of Jordan. Enjoy exploring before it is time to continue on to Jerash.

Jerash is the best example of a Roman provincial city in the whole of the Middle East. Visit the spectacular forum, Roman colonnaded streets, the Nymphaeum and the Temple of Artemis. (B,D)

2 nights in Ajloun Cabins or similar

Following breakfast, it is time to set off on a hike, (approx. 12km) following a trail through wooded valleys to the lush green orchards of Orjan Village which offers you the chance to witness rural life in the area. A natural spring, lined by poplar trees, gives a wonderful contrast to the arid mountains at the beginning of the trail. Hike past dramatic rock walls and old water mills which were once used by the local people to grind their seeds. Enjoy a fresh picked traditional meal in an orchard, with fig, pomegranate, apple and apricots. In the afternoon, visit the great 12th century Islamic castle built around 1184/85 by the famous Islamic leader Salah al-Din. (B,LB,D)

This morning enjoy an easy 2km loop trail which begins from your accommodation and offers an amazing view over the reserve, and discover an old stone wine press. Be sure to keep an eye out for a roe deer, as they are active in the early morning. Returning to your accommodation for a freshen up before driving from the north to the south of Jordan to reach Karak, where you will visit the famous Crusader castle built in 1132/34 by King Baldwin I of Jerusalem.  (B,LB,D)

Today you will set out on foot, through the Dana Nature Reserve which is characterised by a chain of valleys and mountains which extend from the top of the Jordan Rift Valley down to the desert lowlands of Wadi Araba. You will hike for approx 6 hours (14km) passing through beautiful sandstone gorges. This hike brings you downhill to Feynan where 3000 years ago copper had been mined. Enjoy an overnight stay in Feynan Eco Lodge, where you will experience the enchanting world of authentic Bedouin hospitality and natural beauty deep in the heart of the mountainous Dana Biosphere Reserve.

Hailed as one of the best 25 ecolodges in the world by National Geographic Traveler Magazine, the award-winning, solar powered Feynan Eco Lodge offers the most developed eco-experience in Jordan; an experience only made possible by a unique partnership between EcoHotels and the Royal Society for the Conservation of Nature, a Jordanian NGO devoted to the protection of the Kingdom’s finest natural landscapes.

Explore local archaeological sites or simply relax and unwind in the serene courtyards and terraces of the candle-lit complex, safe in the knowledge that your travels in Jordan are socially and environmentally responsible. (B,LB,D)

Feynan Eco Lodge offers various activities, some are free of charge, others can be paid directly to the lodge with all funds going to the local Bedouins in Feynan. You will be advised upon check in what is available today.

This morning is yours at leisure to participate in any of the scheduled activities on offer from the property at an additional cost. Later, you will transfer to Petra, the red rose city, the most famed attraction of Jordan. Petra was first established around the 6th century B.C. by the Nabataean Arabs, a nomadic tribe who settled in the area and laid the foundation of a commercial empire that extended into Syria.

Exploring the city with your guide, you will pass the canyon known as the Siq to see the most beautiful monument in Petra, the Treasury, continuing on via the Street of Facades to the Royal Tombs and Pharaoh’s Castle. Your guide will  farewell you at the restaurant area allowing you time to meander through the streets on your own and then walk back the same way to the entrance.

This evening, enjoy the hospitality of a modern Bedouin family. Experience true Jordanian culture with a home cooked meal, at the home of a Jordanian family. Taste traditional dishes like Maqlouba or Mansaf (vegetarian and special diets can be certainly catered for), and learn about the traditions and the daily life of the local people. (B,LB,D)

It is now time to see Petra from above! Early this morning with your guide will lead you on foot to the Al Madras area, where you will see the upper and lower halves of a single monument, the Obelisk Tomb and Bab as-Siq Triclinium and the Roman Theatre from above. Continue to the High Place of Sacrifice, and pass the Roman Soldier Tomb via Wadi Farasa to Qasr Al Bint. From here, walk back via the regular trail through the Siq to the entrance of Petra. (B,LB)

The terrain on this hike is uneven, with a lot of ‘stairs’ to climb. You must also not be afraid of heights.

Breakfast is early this morning as you set off on foot and hike to Petra and to the Treasury, Amphitheatre, to the Monastery El Deir. Trek along the lesser known back trail across mountain ridges to the Baida region which provides spectacular views of the Rift Valley of Wadi Araba before entering the bizarre landscape of Little Petra. This route takes a minimum of 5 hours to complete and forms part of the Jordan Trail. Overlooks rugged wadis and cliffs, breathtaking scenery and archaeological monuments that portray the layers of Jordan’s rich history, heritage, and religious relevance. You need an average level of fitness.

Little Petra is fondly named due to the similarities of Petra but on a much smaller scale. It is thought to have been an important suburb of Petra and is also accessed through a narrow entrance, similar to Siq but, as the name advises, on a much smaller scale. The site includes tombs, temples, water channels and cisterns carved out of the rock as well as the remains of frescoes on plaster.

This is where many religious activities were held, including the Feast of Drink, when the king of the Nabataeans hosted celebrations and provided drinks for his guests. There is also a cave with the remains of a fresco painted by the Nabataeans that represented grape vines, which shows that this was the area for wine production. In the Siq Al Barid the Nabataean irrigation system, which distributed water through long channels, reservoirs carved into the rock, and dams, is evidence of the greatness of this system.

Drive to the protected area of Wadi Rum (approx. 1.5hrs), one of the most impressive desert landscapes in the world. See the natural rock bridges in Jebel Burdah and Um Fruth, with the opportunity to climb them if you are feeling energetic. You will then explore Abu Khasheba canyon on foot, your guide will wait for you at the end of the canyon, where you will drive to a spectacular location for sunset before continuing on to camp. (B,LB,D)

After breakfast at camp, meet your guide, and your camel, and start your ride towards the red sand dunes through Rum and the Um Ishrin valleys. On the way, you will have a stop at Lawrence’s spring, named after T.E. Lawrence (Lawrence of Arabia), who fought in the Arab revolt against the Ottoman Empire. After marvelling at the Nabatean inscriptions in Anfashiyeh, you will leave your camels and drive four hours to the lowest point on earth, 400 metres below sea level, to the Dead Sea, where ever since the days of Herod the Great, people have flocked in search of its curative secrets. The area is characterised by high annual temperatures, low humidity and high atmospheric pressure. The air is extremely oxygen rich. With the highest content of minerals and salts in the world, the Dead Sea water possesses anti-inflammatory properties, and the dark mud found on its shores has been used for over 2000 years for therapeutic purposes. From here, you will transfer to Amman for the night. (B)

Today is yours at leisure until it is time for you to be transferred to the airport for your onward destination. (B)