Explore two of the worlds least visited countries, Nauru and Tuvalu, starkly contrasting, however both shrouded with their own fascinating history, modern controversy and mystere alongside Crooked Compass Founder, Lisa Pagotto.

Nauru's phosphate mining put the country on the map. It was the world's wealthiest country per capita for a short period, before the island of 'guano' created from thousands of millenia of seabirds nesting here, became exhausted and the country's economy plummeted. The controversial processing centre is one of the few lifelines of income to the island of Nauru, but again, this is only a short term solution. Meet the refugees who keep this island ticking (for the moment) - running the local supermarkets, the barbers, the restaurants. Understand the real meaning of isolation and let your tourism dollars make a difference, even it does seem small.

Tuvalu's offbeat charm and true remote locality, transports you back to an era of travel where you simply learn about a destination from the people you meet and the unplanned experiences that unfold.

With the islands highest peak only four metres above sea level, controversy ensues around the topic of climate change with scientists predicting that this micro nation, could be submerged by the end of the century. With the government already planning the migration of the remaining 10,000 locals off the 'sinking' archipelago, this island nation offering a spectacular marine environment scattered with motus, islets and pristine atolls makes it a destination to visit sooner rather than later.

The future for both Nauru and Tuvalu is simply an unknown. 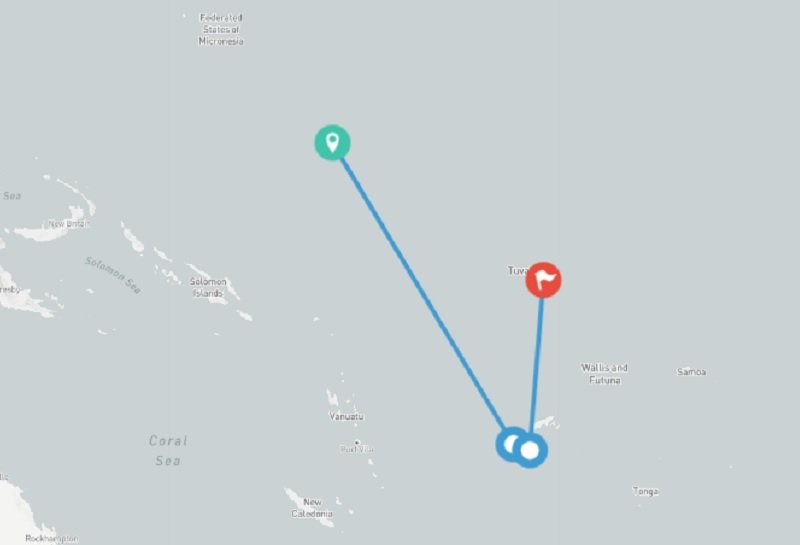 Welcome to Nauru! Flying into Nauru is quite incredible. This flat pancake like island nation, seems to just bob in the middle of the Central Pacific with ocean blue as far as the eye can see. Best known as a phosphate rock island and for the mining which raised and then destroyed the country’s economy as well as Australia’s refugee processing centre, Nauru is one of the smallest countries on earth as well as being one of the least visited.

Upon arrival at the airport, transfer to your hotel for check in and lunch. This afternoon there will be an excursion to Anibare Bay. Formed by the underwater collapse of the east side of the volcano that underlies Nauru, a large arc shaped block slid away from the side of Nauru and rotated out. You will find a classic Polynesian sandy beach, cool ocean breezes, and pristine blue waters at Anibare Bay. Stroll along a fine stretch of white sand surrounded by palm groves and take a dip amongst the beautiful coral pinnacles. Be sure to pack a snorkel! Dinner this evening will be included at The Bay restaurant. (L & D)

After breakfast, it is time to set off to explore what would be Nauru’s capital if it had one. This morning you will visit the Parliament Buildings and the High Court. Lunch today will be at Odn Aiwo.

One of the myths about Nauru, is that the refugees are locked away in the processing centre peering at the outside world through chicken wire fences. This is not the case at all. The refugees are what makes Nauru so fascinating. They are the people running the restaurants, barber shops, hospitals, local supermarkets, bars on the beach – many are business owners contributing to the country’s economy. The refugees are welcoming and laid back. We make time to speak with the local refugees not just today, but every day we are here on the island to hear about life on Nauru, life before Nauru and their hopes for the future. Life is tough on Nauru, but not necessarily in the way we may think. This is an incredibly empowering educational experience and will really shape your impression of Nauru and life on the island. (B,L)

Did you know that Nauru was occupied by Japan during WWII from 1942–45? And prior to that German occupied in WWI and that the islands original name was Pleasant Island? Nauru is covered in hidden bunkers, secret caves, shipwrecks and artillery. After breakfast, it is time to explore the WWII relics at Yaren. Visit some of the machine gun nests on the hillsides as well as the double-barrelled anti-aircraft guns which are still on their mountings on Command Ridge near ‘Topside’ Phosphorus mines. Take in some of the sites from the now abandoned mines and the lunar like landscape left behind. Vegetation is only now slowly starting to come back to the island after years of being baron post mining. From Topside, you will also see the processing centre from above.

For lunch today, enjoy a fish and chip picnic before continuing onto Buada lagoon, the only body of water on the island. This is a very picturesque spot in the lower middle of the island. The lagoon is surrounded on all sides by dense palm trees and other vegetation. Swimming is not recommended here. (B,L)

After breakfast, get your walking shoes on and walk the entire perimeter of the island (approx 19km). We set off early as it gets hot once the sun is up! Nauru is one of the few countries in the world where you can walk the entire country in around 5 hours. Pass stunning beaches, rusty remains of the phosphorus mines, hidden bunkers and slow island life. Chat with the locals as you stroll – some may join you for the walk! Lunch today will be in a local Chinese restaurant. (B,L)

Today is yours at leisure until it is time to head to the airport for your flight to Nadi, Fiji (not included). Upon arrival, you will be met by your driver and transfer for 3.5hrs along the Coral Coast to Suva. (B)

An early start this morning as you head to the airport for your flight to Tuvalu, the world’s lowest lying country with its highest point being only 4m above sea level. Tuvalu, formerly Ellice Islands, is a collection of nine small coral islands scattered in a chain covering an area of approx 676 km. Despite being considered one of the smallest countries in the world, Tuvalu has so much to offer. This remote country is very peaceful and offers a truly off the beaten path journey. Be amazed by its fascinating landscape, natural views and impressive marine treasures. Crystal lagoons, pristine islets and motus and vivid coral reefs. Known for its distinctive Polynesian culture, Tuvalu maintains the uniqueness in its art and craft works, music, architecture and legends. You are about to experience why Tuvalu is a treasure in the corner of the Pacific!

Upon arrival at Tuvalu, you will be met and set off to explore Funafuti’s government buildings and on the lagoon side just north of the wharf, the Van Camp No. 1 shipwreck, which was blown ashore by Hurricane Bebe in 1972. You will also visit the infamous David’s Drill. In 1897, Sir T. W. Edgeworth David, a Welsh-born Australian geologist drilled to a depth of 200 metres here in Funafuti, in an effort to verify Darwin’s theory of the formation of coral atolls. His results supported Darwin’s ideas, however they were short of absolute proof. The main bore hole, David’s Drill, still can be seen today.

As the sun begins to set, head back to airstrip to join the locals in playing some of their favourite sports which include volleyball, football and the national game, te ano (the ball). (B)

This morning it is all about getting even more remote. Take your private boat for a half day exploration to the Triangular Islands where you will visit two motus and enjoy a basic picnic lunch. It is very likely that you will have these islands all to yourself. Your own private piece of paradise. Be sure to bring your snorkel gear to spend time in the crystal waters discovering the colourful marine life.

This afternoon, you will head to Nanumea atoll which is home to Tuvalu’s conservation area. With Tuvalu being the world’s lowest lying country, the rise in sea level said to be caused by climate change is causing the island nation to lose its natural resources and biodiversity. So how can we help? By planting mangrove seedlings. Mangroves are an important resource in Tuvalu which enhance fisheries and provide material for both traditional handicrafts and firewood. Due to the countries low profile, mangroves also protect the islands from tidal and storm surge. You will plant your seedlings in areas threatened by coastal erosion. A one-kilometre stretch of coastline is in the process of being planted to protect the main village area on Nanumea. Let’s play our part and help save Tuvalu.

One of the properties owners, Afelee spent six years in New York as the Ambassador for Tuvalu to the UN. Be ready for some incredible stories! (B,L,D)

This morning, take a 10 minute ride back over to Funafuti Atoll where you will visit the local patisserie. Follow your taste buds as you breathe in the scent of freshly baked bread, rolls, cakes, pies handmade by the local village women.

From here, head to the women’s handicraft centre where the local ladies intricately make Tuvalu fans, mats, baskets, necklaces, woodcarvings and fishhooks which are famous throughout the Pacific. It is then time to head to the airport for your flight back to Suva where your tour ends on arrival. (B)