The Mask Festival is the only festival of its kind in Papua New Guinea. Together with their amazing costumes, groups from all across the islands gather in the coastal town of Kokopo to showcase their elaborate ancestral and spirit masks whilst performing ritual dances, each style forging the unique cultural identity of a tribe.

Witness the 'Kinavai' opening ceremony at dawn, as the arrival of ancestral spirits are welcomed to chants and the beating of kundu drums by elders and initiated young men on canoes.

Experience the spectacular Baining Fire Dance from the Tolai’s of the mainland of East New Britain Province, where in this night-time traditional dance, initiated young men perform harrowing dances through blazing fires amidst evocative chanting by their elders.  Join us as we experience one of the most fascinating festivals Papua New Guinea has to offer. 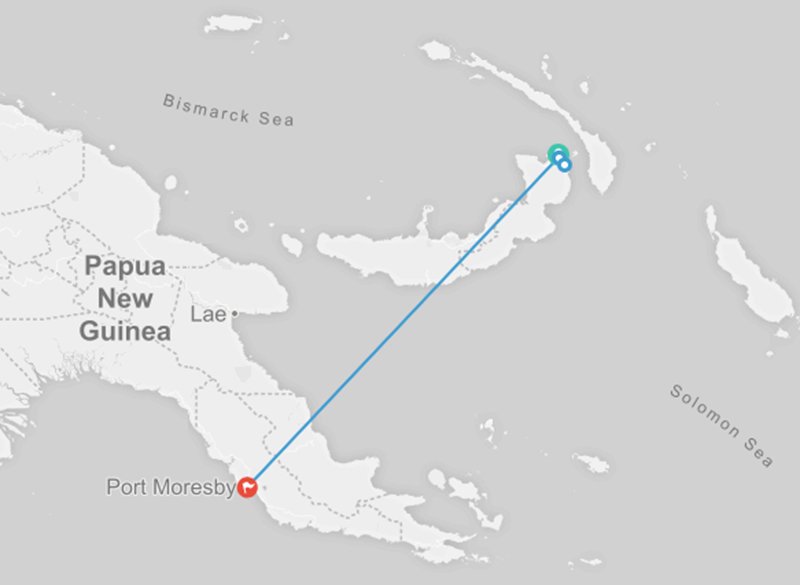 Welcome to Papua New Guinea. Upon arrival at East New Britain’s Tokua Airport, you will be met by your English speaking Australian Tour Leader and local guides who will accompany you to your resort accommodation in Kokopo
township.

Following the burial in volcanic ash of much of old Rabaul town in 1994, East New Britain’s commercial hub has been re-established in a modernised Kokopo over recent decades. Settle into your beachside resort facilities enjoying a swim before your evening meal. (D)

Gather at dawn on the Kokopo foreshore for the Kinavai, which signifies the landing of the Tolai people in East New Britain several hundred years ago and marks the official opening of the Mask Festival. The Kinavai represented with
the arrival of the Tumbuan in their traditional masks, alighting from canoes paddled in the pre-dawn darkness from the neighbouring Matupit island. Dancing to the primal sounds of chanting and kundu drums, the revered ancestral spirits arise to welcome dancers wearing traditional masks from all over Papua New Guinea.

During the day you can take a quiet break from the festival and visit the Kokopo Museum which is conveniently located next to the Festival grounds. The Museum houses an impressive range of war relics along with an informative display of colonial, military and natural history. Lunch can be enjoyed in airconditioned comfort in either the Gazelle International Hotel restaurant or the Ralum Country Club, both located next to the festival grounds. Overlooking the historic Queen Emma Steps, the backdrop is breath taking with ocean views over Blanche Bay. The bay is named after HMS Blanche, which surveyed the bay under the command of Captain Cortland Simpson in 1872.

Returning to the festival grounds after lunch, you will continue to enjoy a VIP viewing of the days performances. Return to your accommodation for a refreshing swim and dinner. (B, L, D)

Following an early breakfast, be driven from your resort to Rabaul and enjoy a morning climb of the active volcano, Mt Tavurvur. The volcano is not too arduous to climb and well worth the effort. Mt. Tavurvur is the most active of the six volcanos that surround the Rabaul caldera. View steam vents and hot springs at base of volcano along with the megapode egg hunters who burrow metres into
the black sand emerging with prized eggs.

Return to the hotel in Kokopo to refresh and then travel a short distance to the festival grounds for the second day of the Mask Festival.

Among many highlights, the standouts include the Kusare warriors from Kandrian on the South coast of New Britain’s western province and the immediately recognisable Asaro mud men from the mainland’s Eastern Highlands. From closer to home, the tall Tubuans from the Pomio district, the Tolai whip dancers along with neighbouring New Ireland’s renowned Malagan mask men all add to the colour and movement.

Return to your accommodation for a refreshing swim and dinner. (B, L, D)

Following an early breakfast, enjoy the panoramic views as you are driven around Blanche Bay and up to the Malmaluan lookout for a spectacular view of the town of Rabaul. View the Simpson Harbour which is part of a huge flooded caldera, the Rabaul Caldera. Visit the Vulcanological Observatory where  instruments monitor volcanic activity across Papua New Guinea.

Visit Matupit Island whose people and settlement survived the worst of the 1994 volcanic eruption despite their location immediately beneath it.

Reminisce at the famous New Guinea Club, the centre of Rabaul’s social scene, back when it was revered as “the Pearl of the South Pacific”. It now houses the extremely informative displays of the Rabaul Historical Society. You enter the
network of tunnels leading to the Japanese military command bunker of Admiral Yamamoto that includes etched ceiling maps.

After meandering through Karavia Bay’s Japanese Hospital tunnels, you will visit the tranquil memorial gardens of the Chinese cemetery where your guide will explain aspects of the historically long association the Chinese have had with
Rabaul. You climb around the large barges of the Japanese Imperial forces that are still housed in even larger tunnels hewn into the soft volcanic cliff faces on the shores of Blanche Bay. The barges were hauled to the water to unload
shipping cargo, along rails by Indian slaves, now buried at Bita Paka Cemetery.
You will then return to your accommodation in Kokopo for lunch and to refresh.

Following lunch you have the choice of 3 afternoon activities :
1. Simply relax and enjoy the resorts facilities and on-site activities.
2. Enjoy a scenic tour of the Gazelle Peninsula. You will observe cocoa, copra and palm oil cultivation undertaken in the rich volcanic soil, noting the area’s significant contribution to the national economy. Kokopo, known then as Herbertshohe, was from 1884 to 1910 the capital of the German New Guinea colonial empire. You will visit the historic German cemetery and the cathedral at Vunapope Catholic mission. View the beachside landing site at Kabakaul from where Australian military forces advanced in 1914 to capture the German
wireless station at Bita Paka. This battle was Australia’s first major military engagement of the First World War. Bita Paka War Cemetery is now the resting place of over one thousand Australian and Allied soldiers who met their fate during World War 2, when “Fortress Rabaul” became the South Pacific headquarters and staging post for the Japanese Imperial Forces.
Your tour will include a visit to the Kokopo Market, one of the biggest in Papua New Guinea.
3. At your own expense :
Half Day scuba diving and fishing activities are available and a great way to explore the seas of East New Britain that are rich in marine life, wreck diving and abundant fish for viewing or catching. Your guides can organise these activities.

Enjoy dinner at the resort.

After dinner, you will be transferred to Kainagunan or Gaulim Village (approx. 90mins) in the Bainings area. This evenings spectacular Bainings Fire Dance is performed only by men from the Bainings clans, where they immerse
themselves into the flames of the fire and escape completely unharmed. This amazing ritual is not performed anywhere else in the world. One of few cultures in Papua New Guinea who do not use the Kundu drum as their rhythmic percussion instruments, the Bainings clan instead use bamboo, and the sound is just as unique as the fire dance itself. After the performance, return back to your hotel. (B, L, D)

Farewell your group and tour leader after breakfast today. You will be transferred to the airport for your flight back to Port Moresby. Upon arrival, transit to international departures to meet your onward flight. (B)

A non-refundable deposit of $1000 AUD per person plus any domestic airfares is required to secure your place. Final payment is due no later than 60 days prior to departure. Travel insurance is mandatory for travelling with Crooked Compass. For full terms and conditions, please click here.