Land of the Phoenicians

Discover the Land of the Phoenicians as you explore ancient Roman ruins, majestic cedar forests that lend their image to the national flag and a sea port town that once boasted the greatest naval fleet of its time. This journey will take you through to Tripoli to explore the mysterious Crusader Castle of St. Gilles before travelling by car to discover the Jeita Grotto’s, Lebanon’s natural miracle made up of two separate caves. Learn about the fascinating ancient history of Lebanon and witness the raw beauty of the countryside as you travel along the Mediterranean coast.

Archaeological sites are abundant in Lebanon; explore Crusader Castles, Phoenician temples, Roman theatres and the royal necropolis. Visit the home of Lebanon’s most famous poet & novelist, Khalil Gibran, who's romantic writing style was at the heart of a renaissance in modern Arabic literature. Tempt those taste buds as you devour traditional local cuisine including the popular ‘Knefe’,’ Mankoushe’, ‘Baklava’ and range of traditional white & red wines. 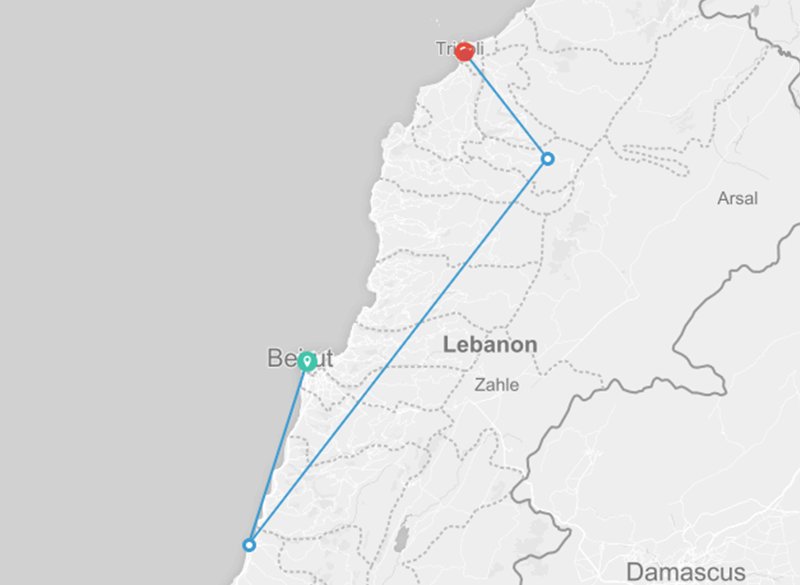 Welcome to Lebanon! Upon arrival at Beirut International Airport, you will be met and transferred to your hotel. The remainder of the day is yours at leisure to explore the city or relax in your hotel as you prepare for the adventure ahead.

The welcoming town of Beirut is the capital city of Lebanon and is sometimes referred to as the ‘Paris of the Middle East’ due to its French influences and vibrant cultural and intellectual life following a period of growth at the end of World War II. Tomorrow you begin to discover the impressive architecture and long history of the city that has earned this reputation.

After breakfast at the hotel, head to the south of Beirut to the beautiful city of Tyr. Phoenician Tyr was queen of the Seas, an island city of unprecedented splendour. Stop briefly along the way at the city of Sidon (Saida), the largest city in south-Lebanon. Take time to explore the caravanserai, the old souks, and the Sea castle, a fortress built by the Crusaders in the early 13th Century on a small island connected to the mainland by a causeway. Later on, stop at one the most famous pastry shops in the region to taste the traditional Lebanese desert of ‘Knefe’. Made from phyllo, pistachios and cheese, Knefe is a sweet desert that is popular across the Middle East and is best served with a hot coffee.

This afternoon continue on to Tyr, a Phoneican coastal city that grew wealthy from her far-reaching, prosperous colonies such as Cadiz and Carthage. According to legend, the Phonecian discovered the purple pigment at Tyr and were the first people to use this in their clothing. Tyr is also home to many UNESCO world heritage sites which you will visit today including; the triumphal arch, the public baths and the Roman-built hippodrome which once held up to 20,000 spectators. Lunch will be served in Tyr.

On the way back to Beirut, you will visit the Echmoun, a temple dedicated to the most important God of Sidon and his lover Astarte. The temple was occupied from 7th century BC to the 8th century AD and has yielded many artefacts of value, especially those inscribed with Phoenician texts, providing valuable insight into the site’s history and that of ancient Sidon, making it the most important Phoenician temple ever found. (B)

Today will be spent exploring Lebanon’s capital. After breakfast, depart for a tour of Beirut, which was given the epithet of “bride of the Middle East.” You will discover the astonishing Corniche with the Pigeon’s Grotto and the newly renovated downtown before an excursion to the National Museum. Built in 1930, the Museum houses a collection of ancient antiquities covering about 60 Centuries of history. Afterwards, you will be transferred to the Chouf mountains, located South-East of Beirut, the trip will take you through a narrow coastal strip, passing the Christian town of Damour, and the valleys and mountains on the western slopes of The Barouk Mountains. The Chouf is the heartland of the Lebanese Druze community. The Emirs of Lebanon used to have their residence in Chouf, most notably Bachir Chehab II, who built the magnificent Palace of Beiteddine during the first half of the 19th Century.

On your way, stop at another historical town, located just beside Beiteddine, Deir al Qamar (the Monastery of the Moon). Visit the square of the village for a Lebanese traditional meal “the Mankoushe,” a Lebanese Pizza, made with thyme or cheese. This afternoon continue to the Beiteddine Palace, the eighteen-century Arabian Nights-type retreat. Here you can admire graceful arcades, ornate ceilings; rich marble mosaics, tinkling fountains and beautifully panelled rooms. (B)

Following breakfast at the hotel, you will be met by your guide and begin your journey to the Cedars forest. At more than 1,800 metres, the Cedars fascinate with their majesty and great age. They are the national emblem of Lebanon and its pride. Continue to the village of Bcharre, the birthplace of Gibran Khalil Gibran, the world famous poet, artist and novelist. Visit the modified 7th century grotto originally designed for hiding monks that was adapted into Khalil Gibran’s tomb before becoming a museum about his life. This afternoon continue on to the “Holy Valley” of Qadisha. The area is famous for its numerous monasteries; the most important one is “Deir Qannoubine”, an ancient Seat of the Maronite Patriarchal and “Deir Qozhaya”. (B)

After an early breakfast at the hotel, leave Beirut behind as you head out to the north. Visit Tripoli and explore the Crusader Castle of St. Gilles, the old city with its narrow alleys, souks and mosques dating back to the Mameluk and Ottoman times. On the way stop at one of the famous pastry factories of  ‘Baklawa’ made of many layers of paper-thin dough with a filling of crushed nuts and plenty of sugar. Continue to Balamand monastery which has been under the authority of the Orthodox Church since the early 17th century.

Today you can try some authentic Lebanese cuisine as you eat lunch in a local restaurant. Proceed to Rachana, south of Tripoli, which its name means the “Museum Village” as it was known for its sculptures made of wood, stone, granite, or metal. (B)

Today is another early start as you set off to explore more of the natural beauty of Lebanon. Following breakfast at the hotel, meet with your guide at 8:30 in the lobby and depart to visit Jeita Grottos, Lebanon’s natural miracle made up of two separate caves. The caves contain a great concentration of a variety of crystallised formations of stalagmites and stalactites. Later on, visit the magnificent statue of our Lady of Lebanon in Harisa.

Continue to Byblos City, one of the oldest cities in the world. Byblos is credited with being the birthplace of the alphabets. This will include a guided visit to archaeological sites featuring: the Crusader’s Castle, the Phoenicians temples, the Roman theatre and the royal necropolis. Visit the old souk and baptistery of the Crusader church of St. John as well as the old harbour. (B)

After breakfast at the hotel, you will begin your short drive to Baalbeck (1 hour) for a tour of the city. Baalbeck is famous for its exquisitely detailed yet monumental temple ruins, when Baalbek, then known as Heliopolis, was one of the largest sanctuaries in the Roman Empire. It is Lebanon’s greatest treasure, and it can be counted among the wonders of the ancient world, containing some of the largest and best-preserved ruins. Towering high above the Bekaa plain, their monumental proportions proclaimed the power and wealth of Imperial Rome. The Gods worshiped here, the triad of Jupiter, Venus and Bacchus, were grafted onto the indigenous deities of Hadad, Atargatis and a young male God of fertility. Local influences are also seen in the planning and layout of the temples, which vary from the classic Roman design to other more recent civilisations.

You will visit the temple complex made up of Jupiter’s Temple, Bacchus Temple adjacent to it and a short distance away the Temple of Venus. The Bacchus Temple is the most impressive of these, construction of the enormous temple was complete in the late 2nd century and was commissioned by the Roman Emperor Antoninus Pius. The temple has been kept in surprisingly good condition thanks to the rubble from the surrounding sites preserving Bacchus from erosion. With eight columns wide and fifteen columns deep, this Lebanese temple is larger than the Pantheon in Athens and is in better condition to. The temple is dedicated to Bacchus, the Roman God of agriculture, wine and fertility, which is evident from the decorative engravings that cover the inner walls of the temple.

This afternoon you will be driven to Ksara, one of the most famous wineries in the region. Here you can taste a selection of the best white, rose and red wines ever produced in the Middle East before stopping to have a lovely, authentic Lebanese lunch. Later, continue to Anjar to visit this Umayyad-period town that was excavated only 40 years ago. (B)

Today is yours at leisure until it is time for you to be transferred to the airport for your onward destination. (B)

Land of the Phoenicians