It is something that has fascinated me for a long time. Working with wildlife – wanting to make a difference and as silly as it sounds, letting the animals know that I care.

I have always grown up with pets and had a fascination with cats – my first opportunity to see the big cats in the wild in Africa was more incredible than I ever would have thought. But surprisingly, it was the gentle giants who captured my heart – the elephant.

Their crinkled leather like skin, long eyelashes batting slowly as the suns rays cracked the crumbling mud on their backs, small birds claiming a free ride on their shoulders and pecking rigidly at parasites as if to protect their ‘master’.

The more I watched these sturdy mammals, the more I learned. One morning on a game drive, I asked our driver if we could just sit and watch the herd of elephants that had come into a clearing in front of us. Each one had a different personality. They were strong, beautiful and unwieldly. There was a cheeky calf wobbly on his young feet as he pestered the older females. Tails swished at him, grunts were exchanged. A lone bull stood proudly in the distance, keeping a careful watch over his harem. The younger male elephants jostled for position to reach the leaves on a lone acacia tree and another female plodded slowly into in a shallow pool of water and splashed herself before trumpeting. There was a real sense of a family community amongst this herd and they were truly fascinating to watch.

When I learned you could do volunteer work with elephants, at first I was sceptical. I was interested but wanted to ensure if I went down this path, I was helping the elephants, not just spending money to be involved with a ‘tourist’ driven project.

I spent months researching and contacting companies until I found one that could provide me with an experience I was happy with, so off I went to the outskirts of Chiang Mai in northern Thailand.

Sitting in the back of an old beat up ute, I bounced my way along the dusty roads past crumbled temples and long elephant grass. I had a local man curled up at my feet asleep and another puffing away on a cigarette leaning on my backpack for comfort, a machete by his side. Neither of the men spoke English, but I was curious was the machete was for. I learned it was for cutting the grass to feed the elephants. 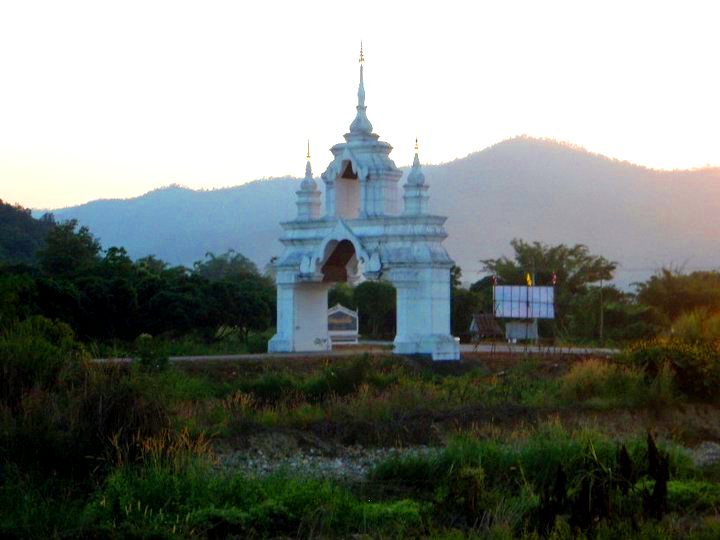 As we pulled into a long driveway, we arrived at what was known as the elephant hospital. My host came to greet me and took me on a tour through my new home. He explained to me that the elephants they have here are all orphans. They are either rescued from the wild after their parents have been poached, they have founded wounded from a battle or they have come from other tourist camps where they have been mistreated. I hadn’t even seen an elephant yet already my heart was aching for them.

I climbed a wooden ladder onto a platform at the ‘hospital.’ As I arrived at my top, I met with one of the vets. She was also a volunteer. She had been here for six months and her role this week was to dress the wounds and abscess on the elephants. Every day at 11am, the elephants with infections, cuts and sores would make their way over to the elephant hospital. Jess (with my assistance) would clean the wounds, apply antiseptic and asses their progress in recovery. 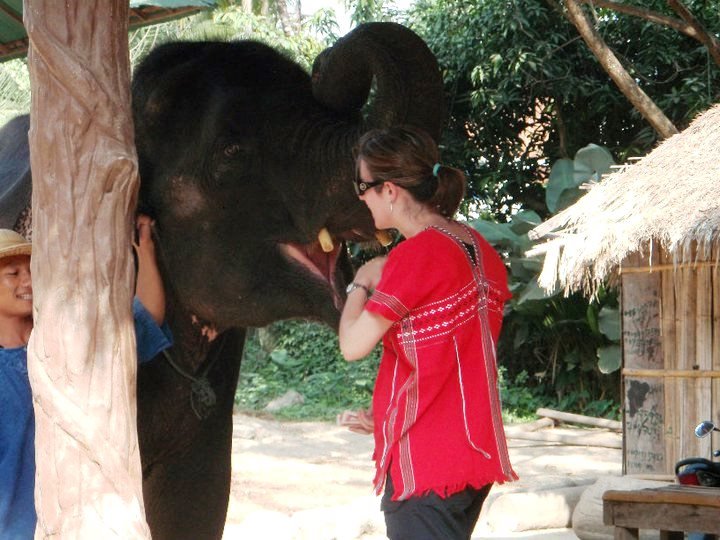 Becoming aquainted with my elephant

I was then introduced to my elephant, who I would be responsible for over the duration of my time here. His name was Billy. He was a young bull who had lost his mother to poachers and was still mourning and as a result, quite often unsettled. My first couple of days consisted of bonding with him. Each morning I would be the first person to have interactions with him. I would scrub him with a brush, provide feed for him and clean out his sleeping pen. We would go on a two hour round trip walk through the surrounding jungle where he was encouraged to forage. Once he was comfortable with me, he would allow me to sit on his back – bare back – no saddle or ropes. This in itself was truly magical. Me, my ele and the rush of wind through the jungle. 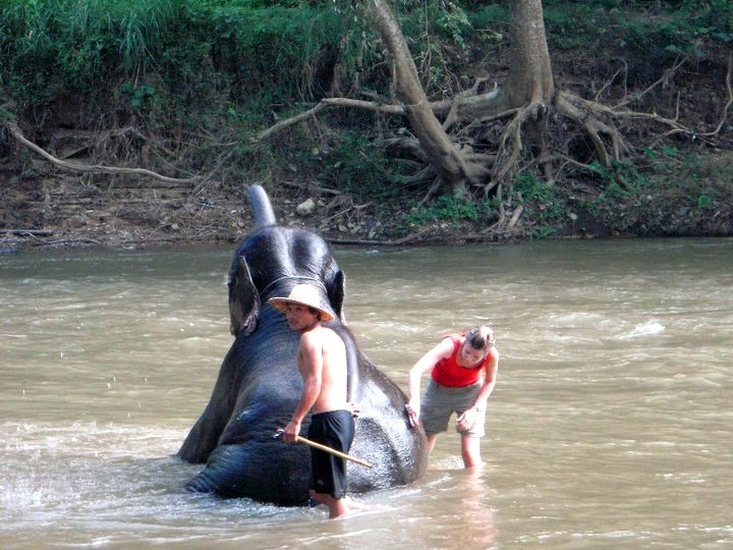 Time for a scrub in the river 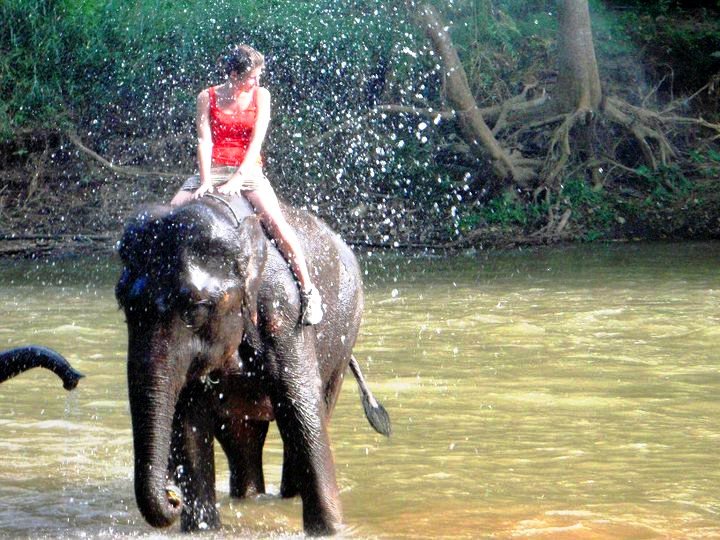 We would spend 2 hours in the water every day together as well. Not in an elephant pool, but in the river. It would consist of him just laying down and letting the river water rush over him while I watched on like a protective parent, or me scrubbing him with a brush. Scrubbing his back, belly, toenails and the place he loved the most was behind his ears. He was a cheeky one too. If I had turned my back, I would be showered with water from his trunk. He did not like being ignored.

On alternate days, I would be huddled in the back of the ute I arrived in with 8 or 9 other bodies and venture into the long elephant grass fields with the local workers. This time I had a machete in hand. Covered from head to toe in the searing sun blasted down on our bent backs, dripping with sweat from the humidity, myself, the other volunteers and locals would spend hours hacking at this blade like grass, loading up the empty trucks that had followed us ensuring we had enough grass for the elephants for the next day. 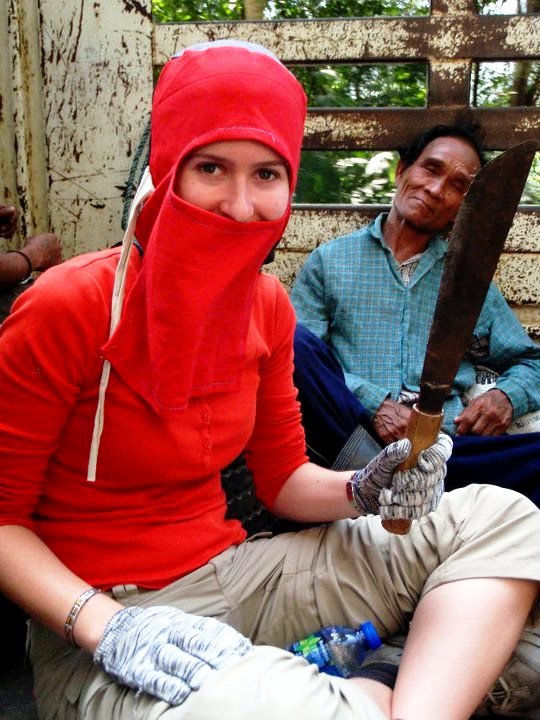 Machete in hand to chop some grass! 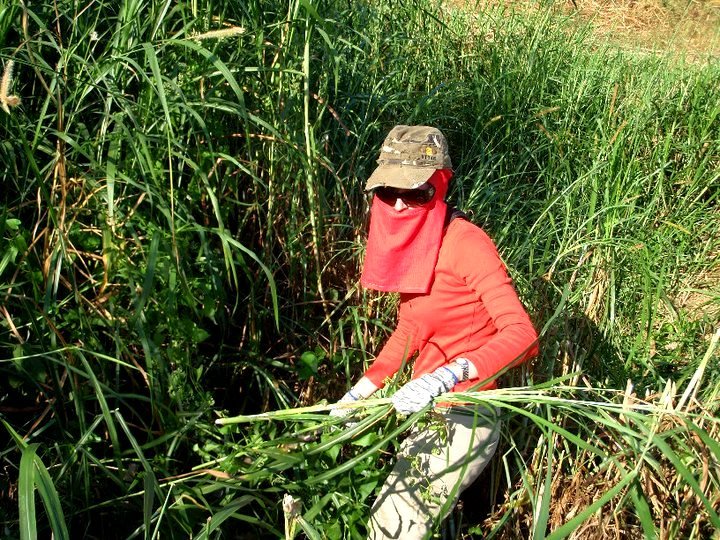 Carrying the grass to the truck

This was hard work, let me tell you. I dreaded these days. I felt like my arms were going to fall off, somehow you would always end up with your wrists and forearms sliced and cut from the razor sharp grass, which then attracted the flies.

There was no shade and nowhere to get fresh water. You would return to the camp at the end of each day what felt like 10kg lighter from the hard work and sweat poured out. At night, you would collapse on the hay floor with your elephant and hear their gentle breathing and all the hard effort was paid off and washed down with several cold beers.

Over my time here, I learned that these elegant creatures had almost human like qualities. Their chocolate brown eyes reflected emotion and they were communicative. You could sense their pain, fear and gratitude. Never have I been so engaged with such an intelligent and loyal animal.

This acrostic poem truly sums up the elephant. 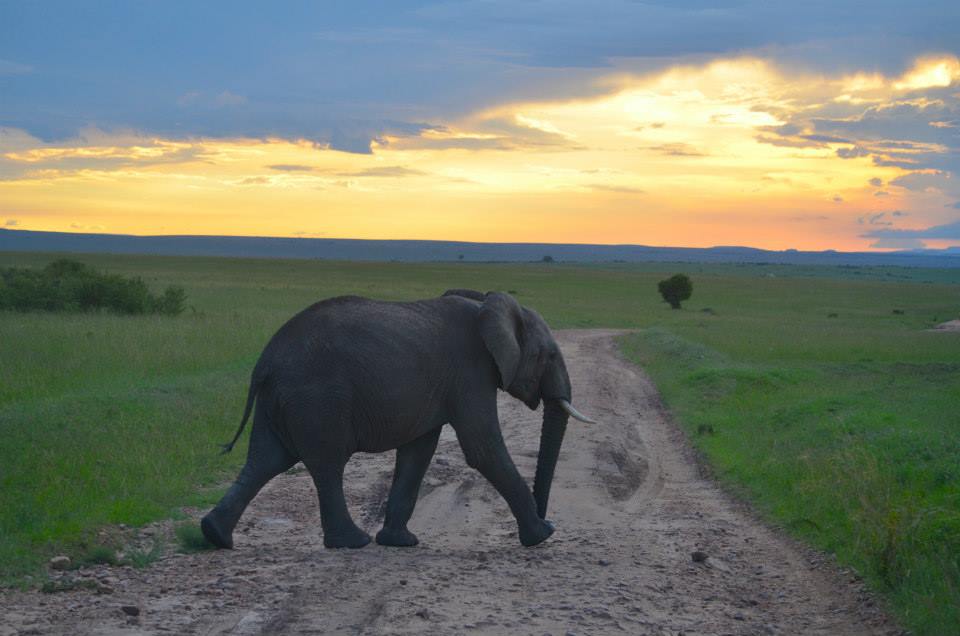