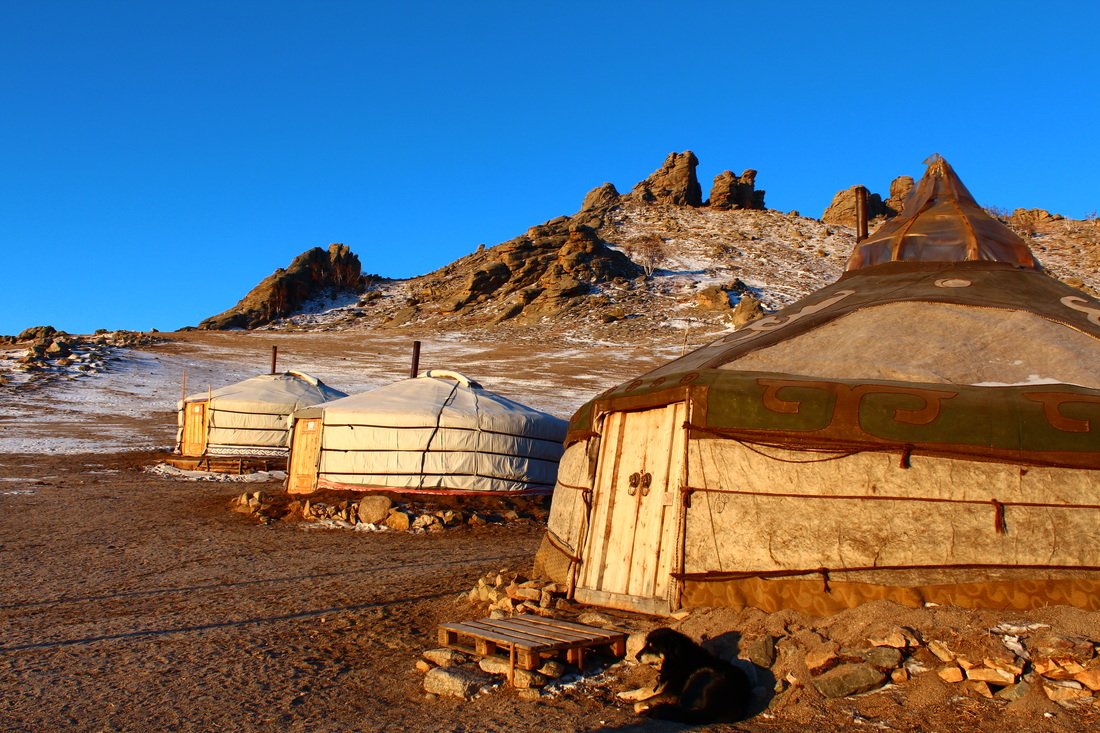 The nomadic life is tough. Battling harsh climates, hunting for your meals on horseback, daily back breaking labour and having to relocate and rebuild your entire home every 3-4 months. Over 51% of the Mongolian population are still living life as nomads. Living in gers and migrating with the seasons in search of greener pastures to nourish their livestock, living off the land and their animals, living a simple, exhausting yet fulfilling life. 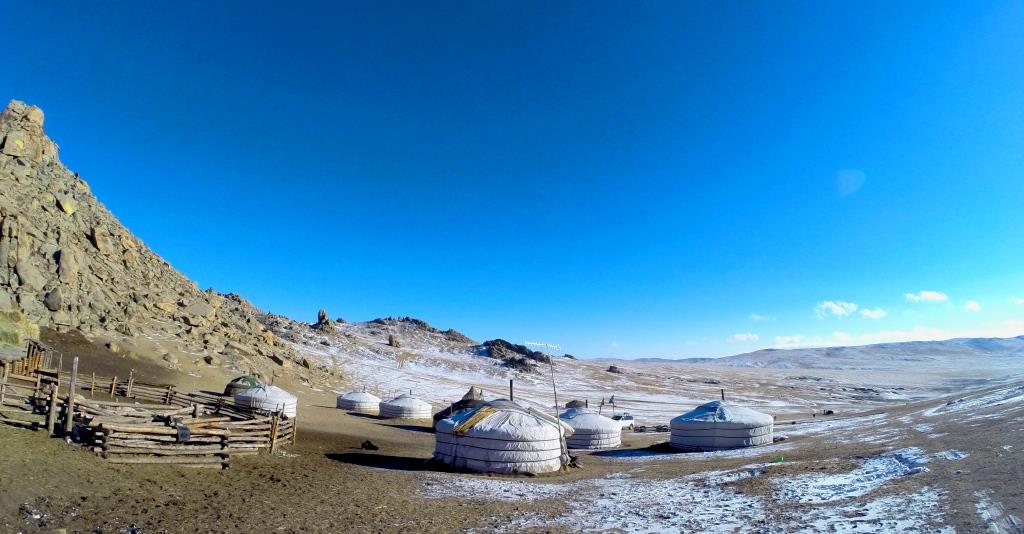 How the locals live

Many visitors to Mongolia dream of spending a night in a round white ger when travelling through the grasslands.

The picturesque photos of beaming white dome like tents placed perfectly amongst the rolling grassy hills, smoke puffing away from their iron chimneys as cows and horses graze around the outskirts.

Many travellers are unaware of the options available to experience such a nights stay in this traditional type of accommodation, so here are a few pointers for those keen adventurers who are eager to ‘Live Like a Local’. 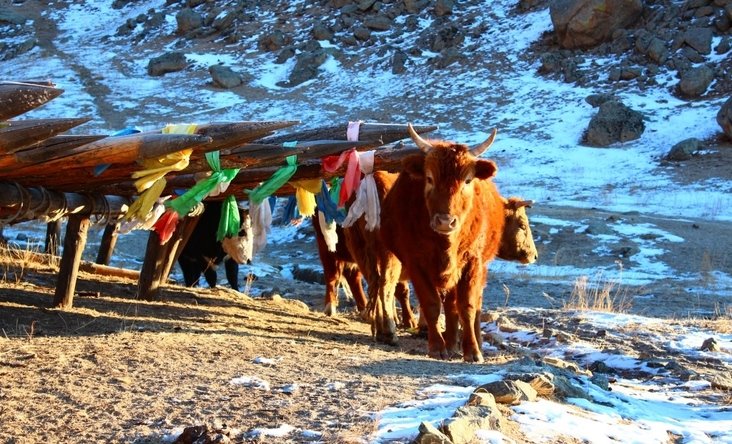 Part of the family

There are two ways of experiencing a night in Mongolian Ger:

Scattered throughout the many national parks of Mongolia, the most popular is Terelj National Park (60km from Ulaanbaatar and the most easily accessed). Many tourist ger camps have been set up specifically with the tourist in mind who wishes to try the local style of living.

Quite often located at the base of spectacular mountain ranges or in the heart of a dramatic valley, these tourist ger camps have been situated in key spots to you make you feel like you are living in the grasslands. 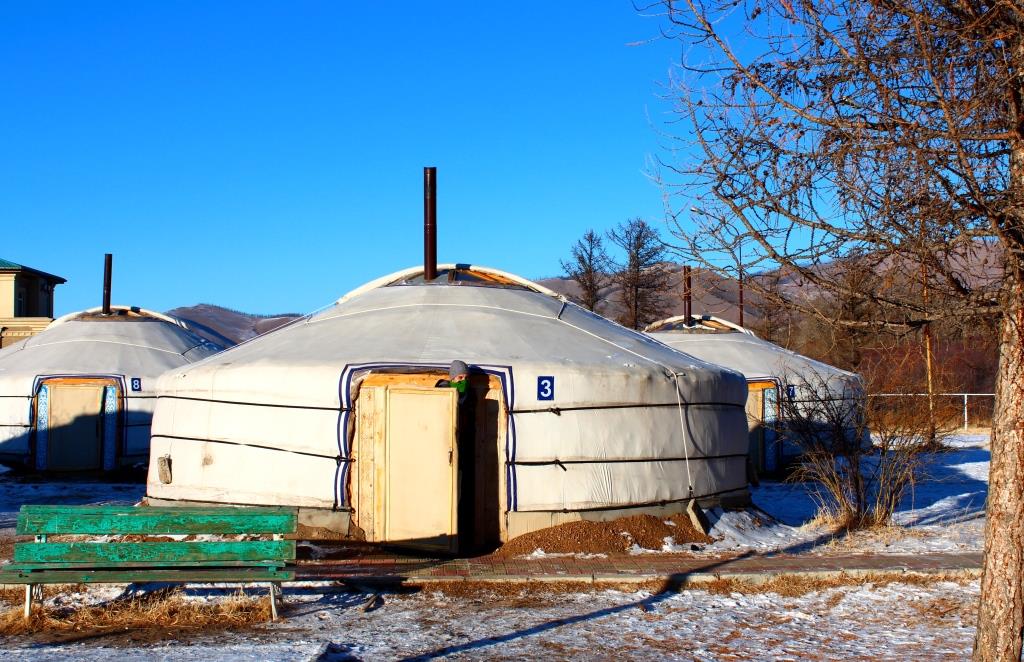 Generally attached to a larger hotel with regular rooms, the tourist camps are a great option for those who still would like a few of the creature comforts of a regular hotel without going completely nomadic. The gers are generally in a cluster together with 6-8 beds huddled inside. They are larger than the traditional gers used for living by the local nomads and many have electricity, charging facilities and even a TV. Apart from that, beds are placed in a circle around the perimeter of the wall, with the centre of the ger being home to the oven which heats the entire room. Not a problem in summer as the ovens are not used, but if you are staying in tourist ger camp in winter, the ovens in these gers are not your traditional Mongolian stoves (due to fire and safety regulations.) 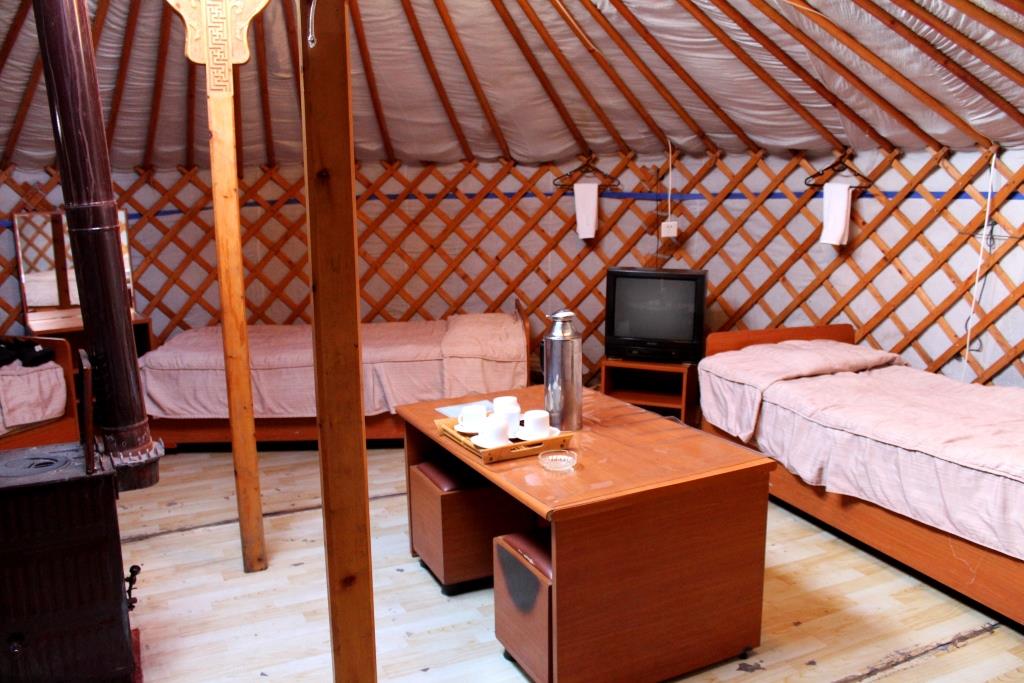 Inside a tourist ger

They are mass produced stoves with different combustion chambers to the traditional ovens. What this means is, is that your stove continuously needs to be topped up so your sleep is regularly interrupted with a ‘fire man’ coming into your ger to restock the fire (you cannot do this yourself). Quite often the fires burn out quickly, leaving you chilled to the bone in a short period of time. Mongolian winter evenings drop well below 0C.

One benefit of the tourist ger camps, is that there are hot showers available and flushing toilets. Not in your ger of course, but only a short walk away. This is one of the main creature comforts of the tourist camps. 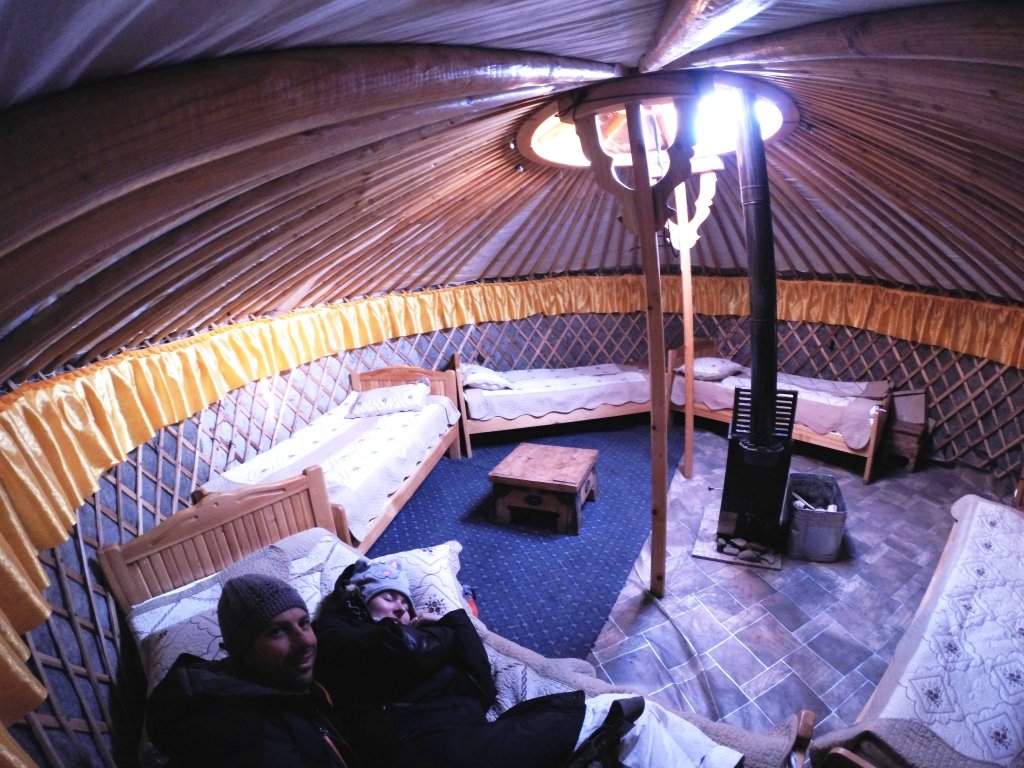 Simple and basic inside a tourist ger

Another creature comfort is that being attached to a hotel generally means and bar a restaurant. A restaurant means you can choose what you would like to eat and drink. The Mongolian diet mainly consists of three things. Dairy products, meat and noodles, so if you are feeling like something western, this is your chance to get it. 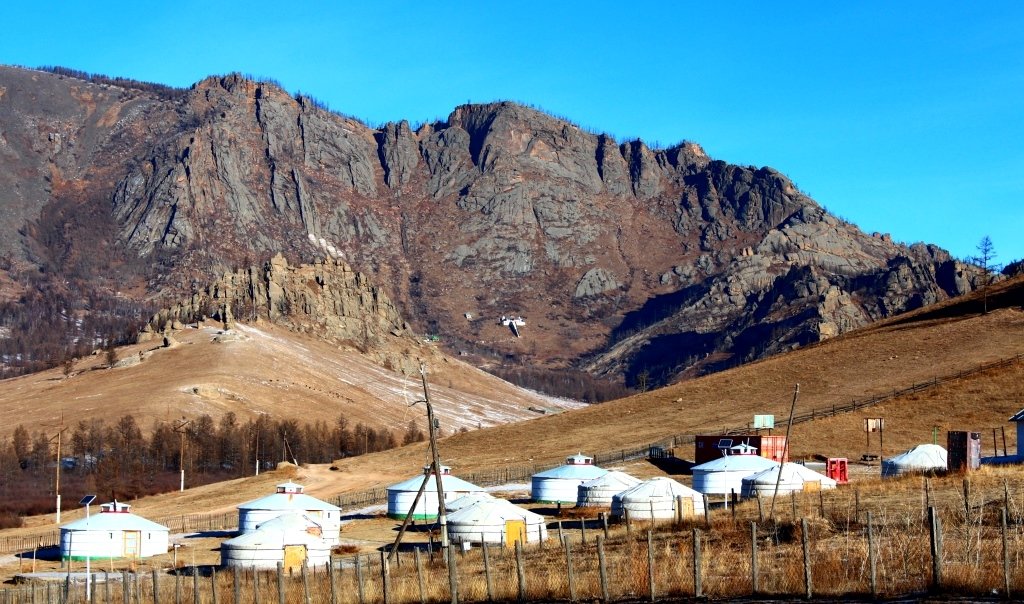 There are two ways to experience this type of stay. Be sure to be extremely clear which option you would like when you book. Quite often nomadic families have an ‘additional’ ger in their cluster specifically built for tourists. Although you will still be staying in a true nomad camp, the actual ger you will be sleeping in, has been created purely for tourists. New beds, nice furniture, western bedding attire, electricity etc. To me, this is not truly authentic but is one step closer than a tourist ger camp. 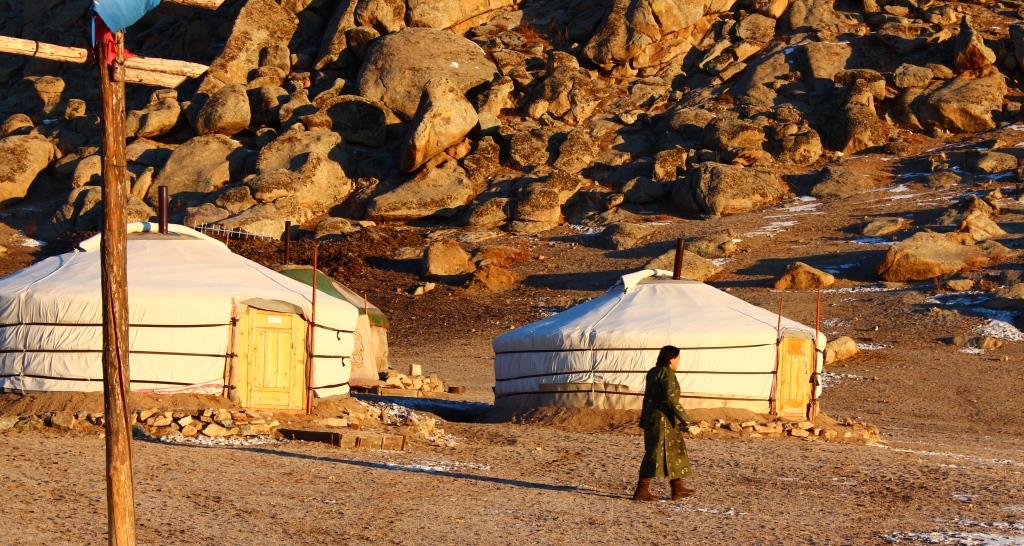 For me, the truly traditionally realistic experience is to stay with a nomadic family who are not equipped for tourists. Difficult to find, but they exist! I have just done this myself and it was out of this world. I experience a lot of rural homestays in my travels but this one takes the cake. 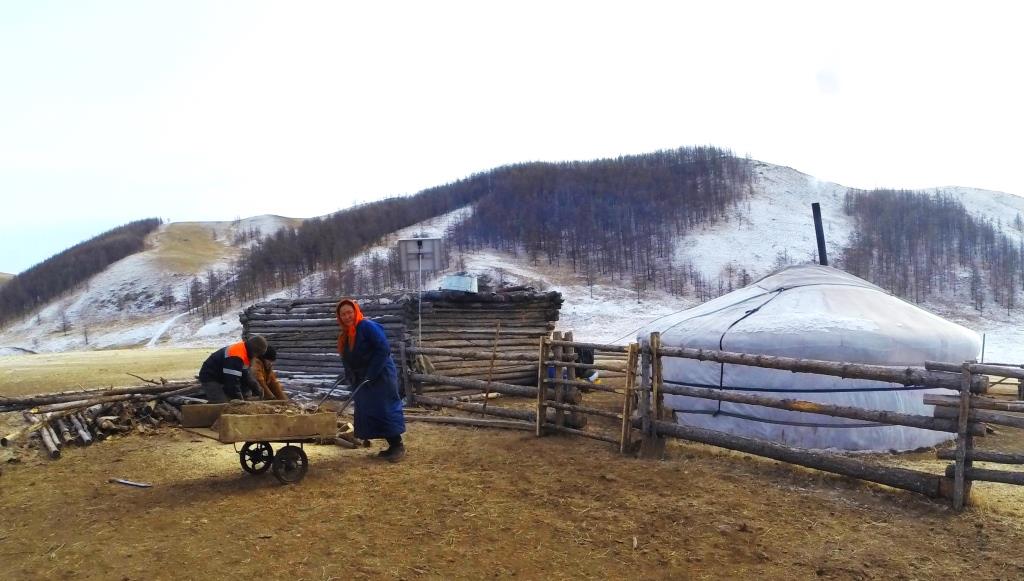 Locals hard at work, living off the land

We stayed with the grandmother of the family. In her little farm, she had two gers. One for cooking and cleaning, the other for eating and sleeping. The cooking and cleaning ger is as you would image. Pots and pans everywhere, the Mongolian stove crackling and burning away all day with bowls of water boiling. Chunks of freshly slaughtered meat lay on the makeshift bench, carrots and potatoes in sacks on the floor. Two new born lambs bleeted softly in the corner, only a week old and born out of season so it was still too cold for them to be outside with their parents. 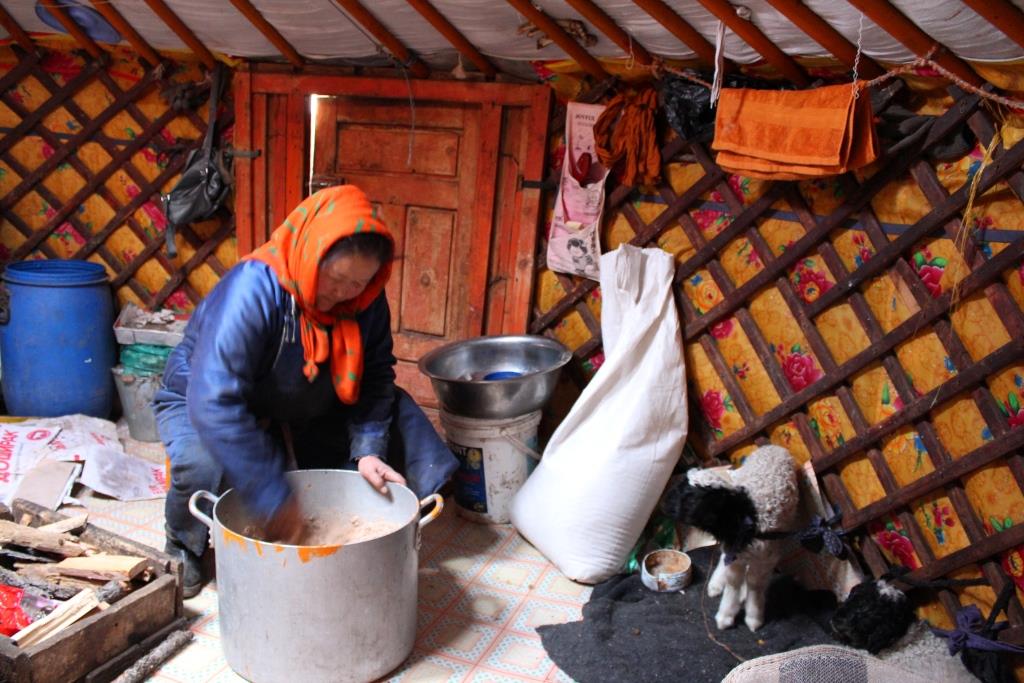 A bear paw, snout, claw and teeth hung from one of the rafters, small orange wooden stools no more than 30cm of the ground were used for seating. A large stainless steel pot sat on the floor for food scraps which were then mixed with ground husks and fed to the animals. The ger smelled of food all the time and had a homely feel to it.

In the eating and sleeping ger, there were two single beds each with pile of woollen blankets most likely locally woven. A small shrine dedicated to the Dalai Lama was on of a small dresser and a low wooden table was next to the stove. 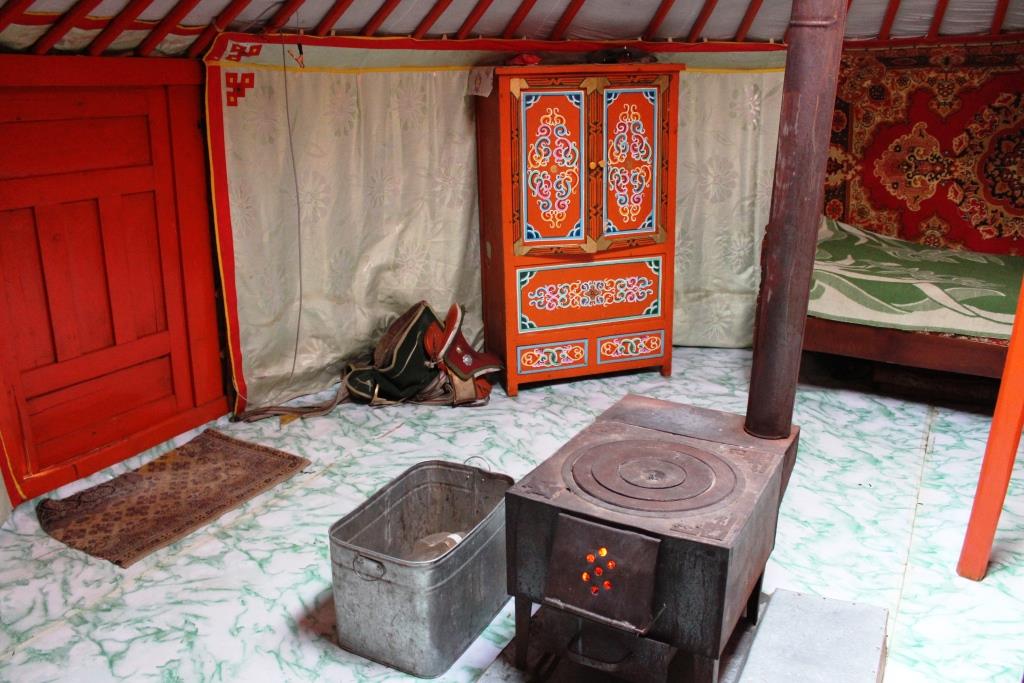 Central stove, heats the whole ger and cooks all the food

The two gers were guarded by two fluffy Alsatian looking dogs, a fence made of tree trunks bordered the gers. Behind, was a stable which housed horses, cows, sheep and goats which all roamed free during the day and knew when to return in the evening.

500m away to the north was the ladys son’s ger. His children running around and stirring up grandma all day. 700m down the road was the daughters gers. Her children also running a muck and teasing the other children. 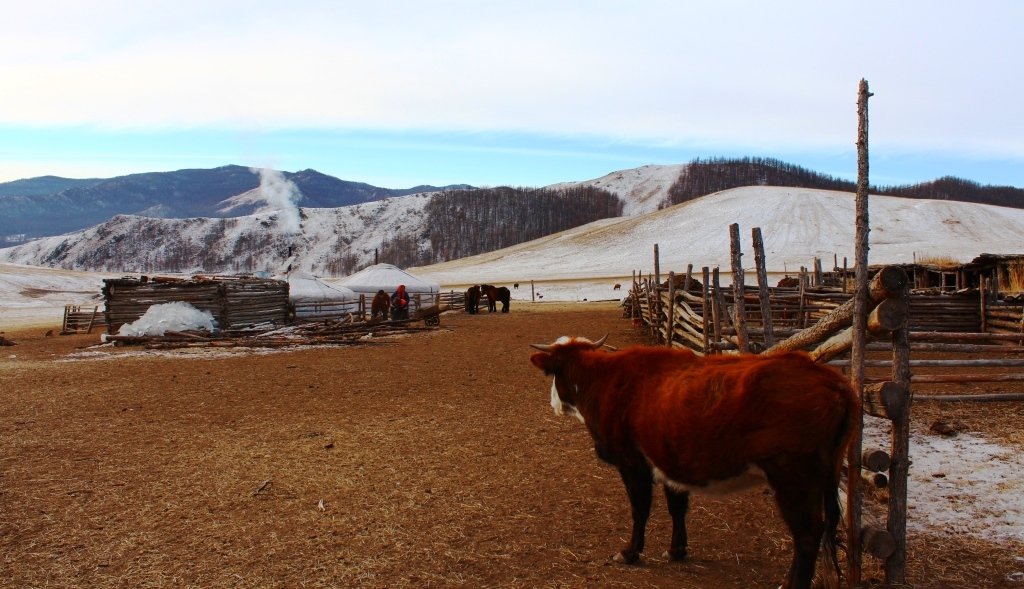 This is home for many

Both old and young were traditionally dressed in their over coats and head scarves, and everyone helped out. Children as young as four years old were carrying the wood for the stove that dad was cutting up, they were lugging plastic containers of horse feed to the horses and helped to round up the sheep.

Alongside the wood pile was a large mound of frozen ice blocks hacked and collected from the local river to provide the family with pure drinking water, a wooden fence was off in the distance to shelter a hole in the ground for a toilet. 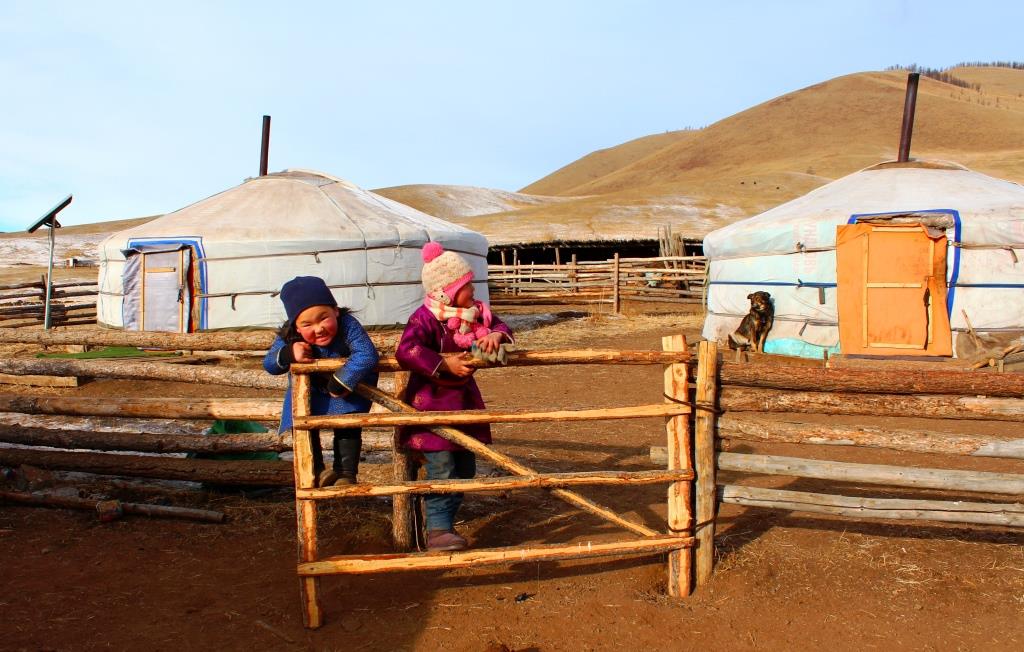 A single light in each ger was illuminated by alligator clips clinging onto forklift batteries. The son smugly pulled out his mobile phone (not quite nomadic I know), and was super proud to show us the photos of the wolf he had shot last week. No English was spoken by anyone in this family, but communication was never a problem.

We ate what they ate. For lunch we watched grandma hand make dough which became dumplings stuffed with beef, they were cooked in a stock with some onions, carrots, potatoes, noodles and cow fat.

Dinner consisted of ‘pancakes’ which were really like empanadas stuffed with beef and others with horse that were fried over the Mongolian stove. 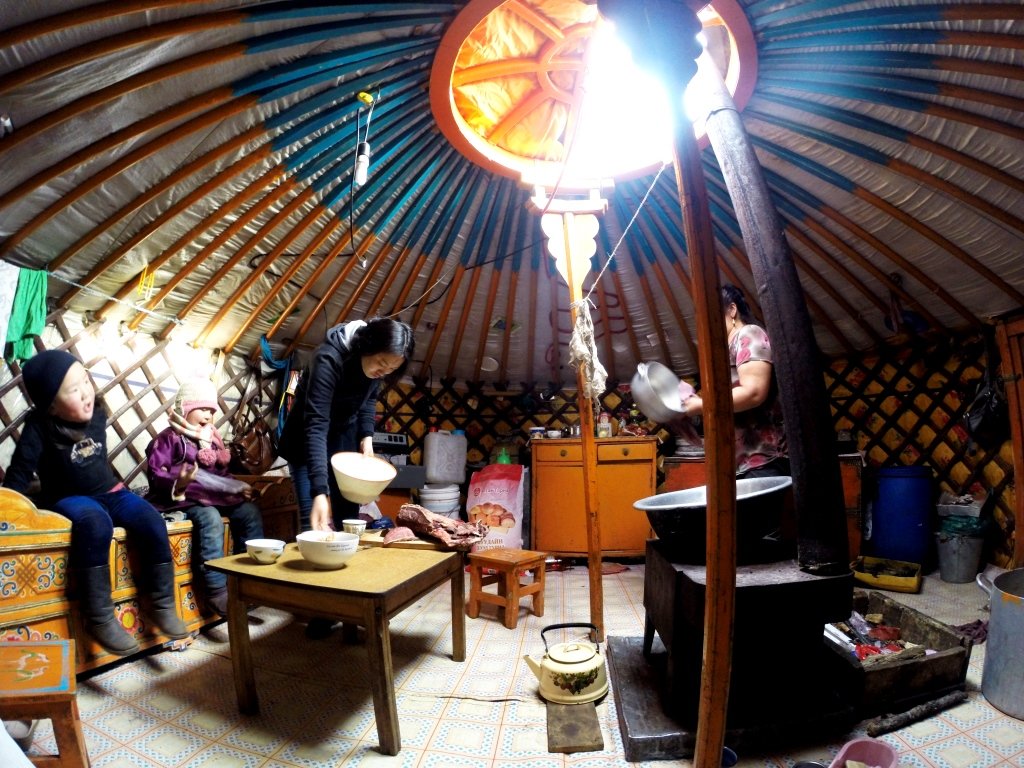 Inside a traditional ger

We witnessed grandma milk her cows under the full moon. The thick unpasteurised milk was funnelled into an empty PET bottle before being boiled and served as a drink. This is the nomadic tea.

Sleeping in this traditional ger was much more comfortable that our experience at the tourist ger camp the evening before. The True Mongolian stove burned away throughout the night without much assistance keeping us all cosy.

In the morning breakfast was served – rice and meat porridge along with some tea.

There were no shower facilities available here, so wet wipes are advisable as well as BYO toilet paper. 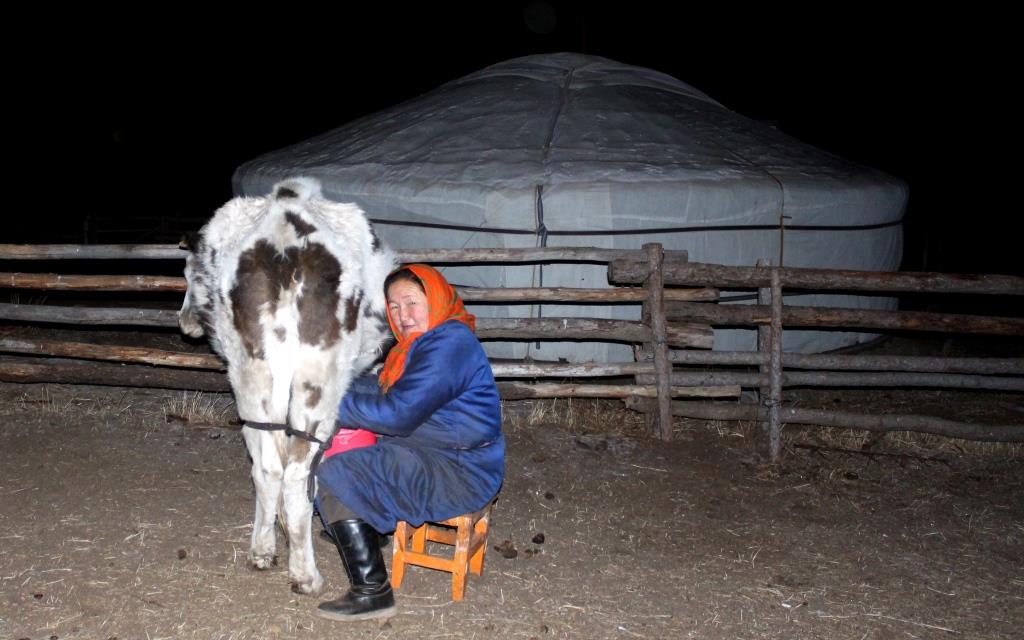 No time to rest, it's time to milk the cow in the middle of the night

We learned about life as a nomad, the hardships, the lifestyle, the government acceptance, their movements through various seasons, their dress and culture, religion and customs – something that you would perhaps miss staying in a tourist camp.

A great hands on experience for those wanting to get into the heart and soul that is Mongolia. 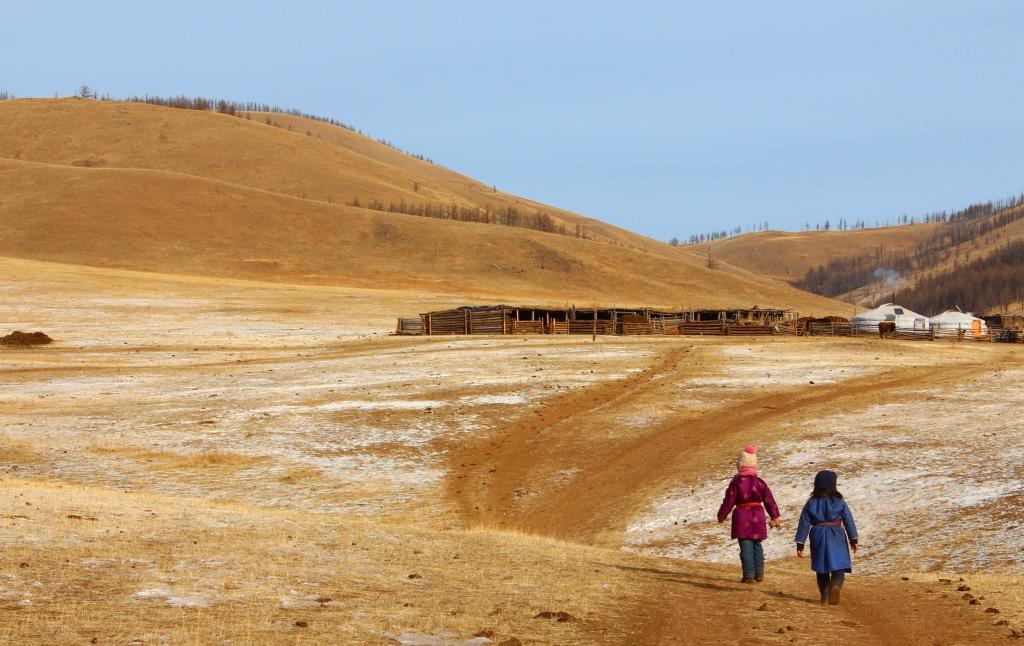 Want to make this experience yours? Check out our range of tours in Mongolia.