The Swing at the ‘End of the World’

The swing at the ‘End of the World’. Many of us have seen photos of it in email circulations or on social media, including myself. This is how I came to learn such a thing existed. A tree with a rickety tree-house somehow balancing precariously in it's upper bows and from one of those thin knobbly looking branches, resembling an old mans' frail arms, extends two thin frayed ropes which attach to a 'seat'. This apparently forms a swing that well, swings, but stretches out over the lip of an active volcano. As soon as I saw the images of this, I knew I had to do it. Onto the bucket list it went.

I searched and searched for as much information as I could find on this surreal swing only to find minuscule bits and pieces of information and not a lot that added up.

what I did know, was that it was located just outside Banos in Ecuador, which is located at the start of the Ecuadorian Amazon, and that the tree-house was called Casa Del Arbol. The 'rustic' (dilapidated) white tree house (as in the above image) was a seismic station and you gave the weather man at the top $3 to swing on the swing. That was about as accurate as I could uncover in my research.

The route from Quito to Casa Del Arbol

As soon as I knew I was heading to Ecuador, I booked a hire car and planned to drive to Banos from Quito and find this swing! Mission accepted.

Banos, 179km from Quito but a decent 3-3.5hrs drive due to the winding roads and slow streets through small crowded townships, the drive in itself was spectacular. Heading south on the Pan American Highway, the first 2 hours of the drive are through the Avenue of the Volcanoes. Jagged peaks border either side of the road, the summits of many encircled in wreaths of clouds. Glacier capped Cotopaxi looms over you as you venture further south.

Arriving into Banos, the main highway skirts the outer rim of the small adrenaline activity filled town. Banos is like the Queenstown of Ecuador. It is the place for rafting, hang gliding, bridge swinging, quad biking and all things with a rush. We drove through slowly, in search for any possible sign to Casa Del Arbol. And there it was! About 1.5km outside the main section of Banos, a street veers slightly on an uphill diagonal angle to your right (if coming from Quito direction). There is a large blue and red almost banner type sign over this local looking road with a few Spanish words and the last word being Tartugua (the volcano this swing swings over). A tiny sign in blue with white writing to the left of this entry about the size of an A4 piece of paper (be sure to keep your eyes peeled!!) says Cascades des Virgins, Luna Returno Hotel and Spa and Casa del Arbol 10.4km. Yes!! This place exists! We headed up a steep, windy and increasingly narrowing road. It continued up, up and even further up. We passed nothing but ramshackle farm houses and the odd cattle or local farmer. 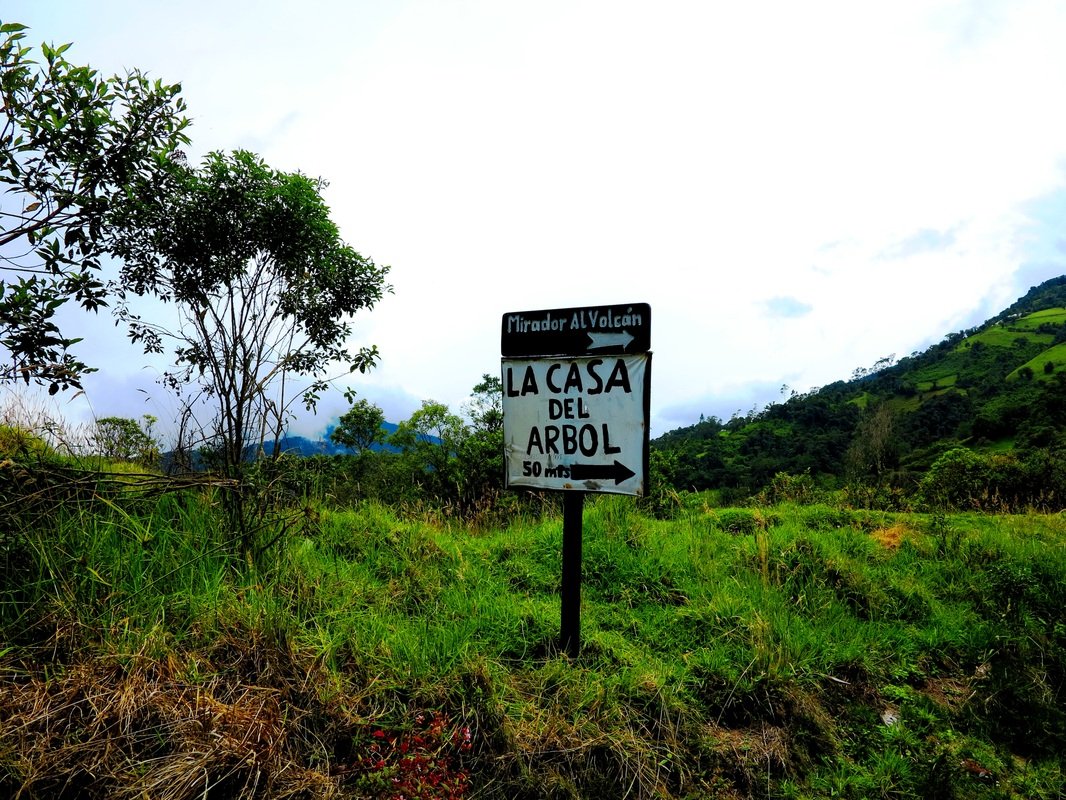 After a slow and steep 5km, the road is no longer asphalt and becomes loose cobblestones for the next 6km. Keep going. You are going in the right direction - trust me!

A faded wooden sign that is barely legible appears 2km before you are ready to give up thinking you are driving no-where or perhaps more appropriately to the end of the world. At the end of the 2km, you will see about three signs saying Casa Del Arbol 50m and an upward arrow. The last part of this pilgrimage, you have to walk. Yes it is steep, but it is only 50m. 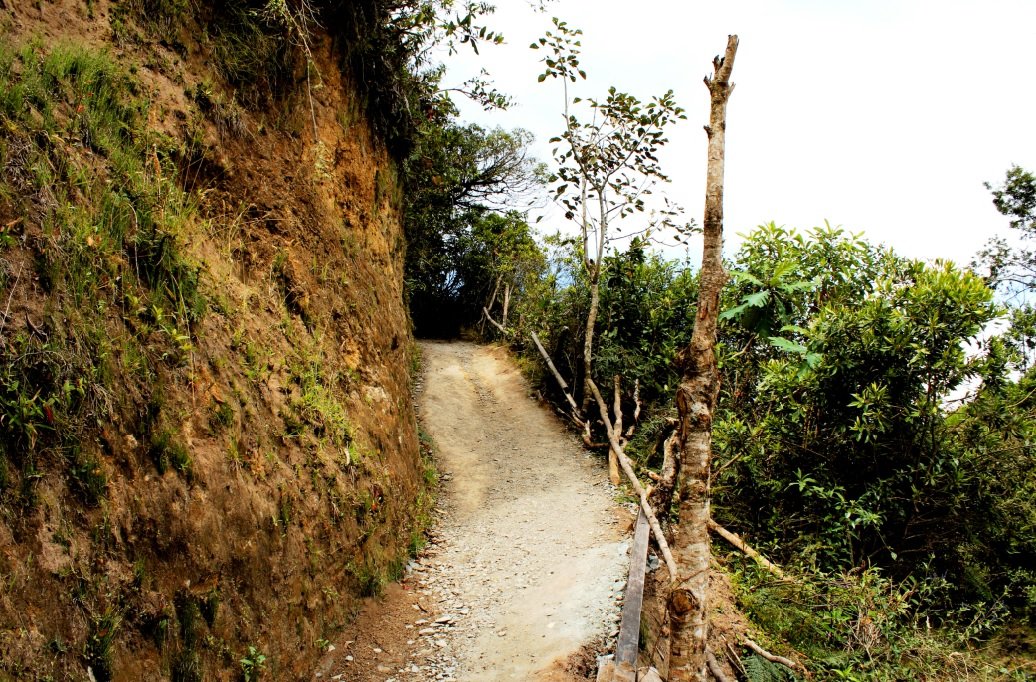 Chances are there will be several yellow taxis parked near this walkway which belong to  those who have ventured from town who have heard of this mysterious swing (because as we found out when we explored Banos, all the taxi drivers want to bring you here!) Clearly it's no secret to the locals - just to the internet.

The road here is dirt and there is a make shift car park for those who have driven or ridden up on a quad bike (also for hire from Banos for those a little more adventurous.)

Excitedly, I walk/almost run like an excited child. Now this is where things have changed from all the blogs I had read. I am not sure how new these changes are, but my visit was December 2014. At the top of the 50m narrow path through the trees, there is a brand new looking little hut at the entrance. Like those pre-assembled cubby houses you see out the front of Bunnings. A lady is there who charges you $1 per person to enter the grounds and swing on the swing. I almost threw her $10 and forget about waiting for my change because I wanted to go on the swing so bad! 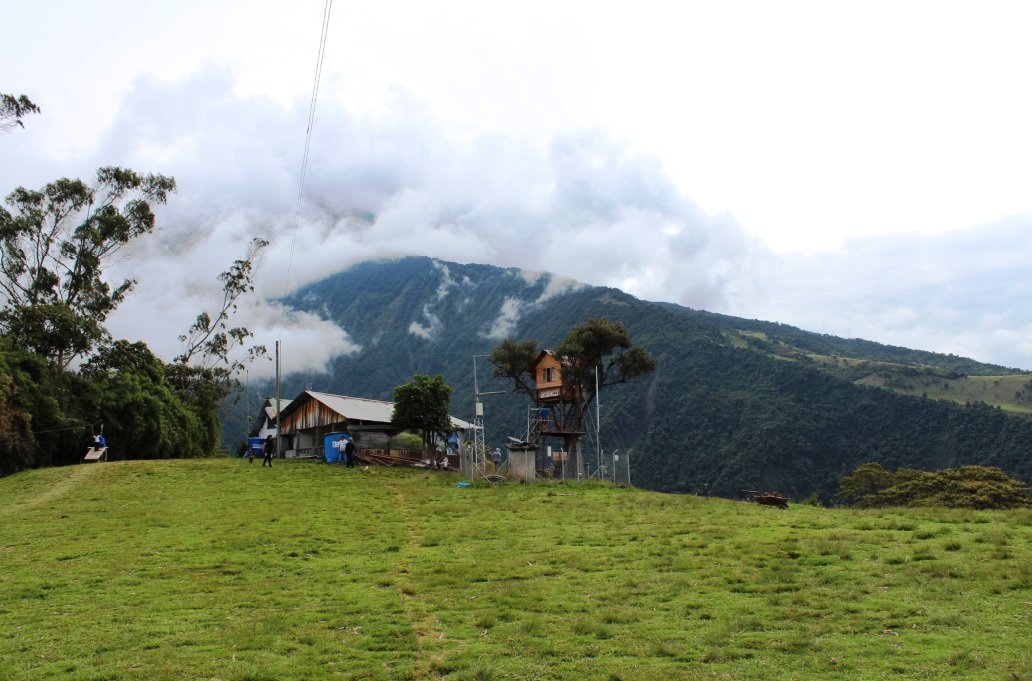 I walked through the grounds and there is the tree-house and the swing. It looks exactly like the photos I have seen, except there are a handful of tourists here and the tree-house is no longer white and rickety. It is newly crafted and peach in colour. I climb the ladder inside expecting to meet this weatherman who lives in this seismic station and secretly hope that I can play with his volcano measuring instruments seeing as the volcano is literally 50m in front of us. I want to hear his stories on when he thinks the next eruption is due to occur - apparently it is overdue! I disappointingly learn that this is not a seismic station anymore and there is no weatherman here. Just an empty tree-house showcasing the most spectacular views of the Banos Valley. Meh... You win some you lose some. This tree house was cool and those views.... Wow! Being eye to eye with an active volcano is not normal for most people. Being in this tree house alone was just fantastic. 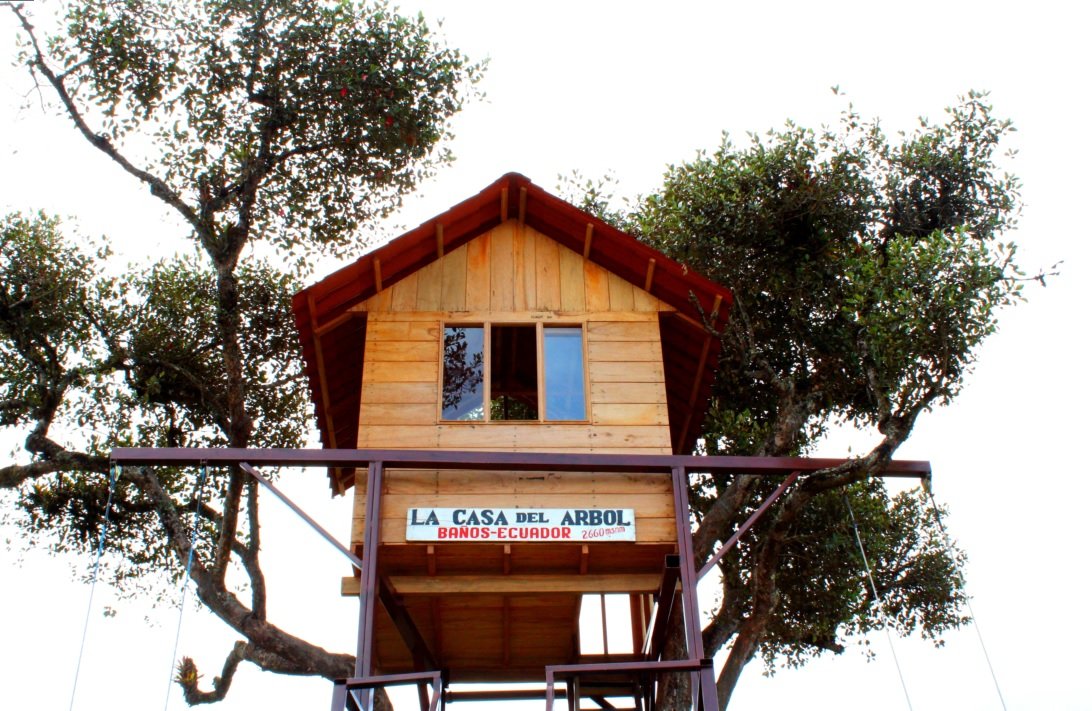 Now to the swing. Or should I say swings? There are actually now two swings, one on either side of the tree, they have clearly been upgraded since the blogs I had read. Yes the ropes that hang from the tree are still super thin and there is only a pointless lap band that clips onto the swing with a carabina and it provides absolutely no safety measures at all but the ropes were very new looking and the seat although it is still just a plank of wood, is no longer some random branch that you have to trust will carry your weight.

The swing itself is amazing. An absolute thrill. So much fun and the views are just spectacular. Launching yourself over the edge of a cliff into the mouth of an active volcano can be super daunting or for many, get the adrenaline pumping through their veins, but I am going to disappoint many people here. 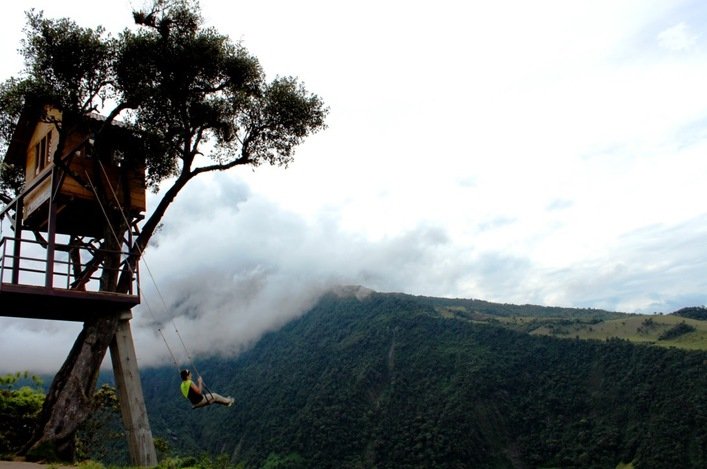 Time to take a swing

You do not actually swing over the open lip of an active volcano despite what you may read on other blogs. This would just be plain ridiculous and super, super foolish. One puff of smoke and those ropes would disintegrate and down you would plummet. These Ecuadorians may not have safety up to scratch in many areas of their country, but they are not stupid.

The swing does swing out over a ledge, a ledge that looks straight across to the active Tartugua Volcano. The volcano soars significantly higher than where you are and on a clear day you can see it huffing and puffing. Still truly spectacular and the volcano is only about 50m away so you are damn close to it. There is just no chance for you to fall inside it's gaping crater now that you have learned you don't swing over its open peak, just possibly down a steep ravine..........

Although slightly different to what I had read, this is still a must do and was still truly awesome! So much fun and you can get some great photo snaps on the swing. The lush scenery here is absolutely spectacular. Where else on this planet can you swing so close to an active volcano hanging off a branch under a super cute tree house over the edge of a cliff? 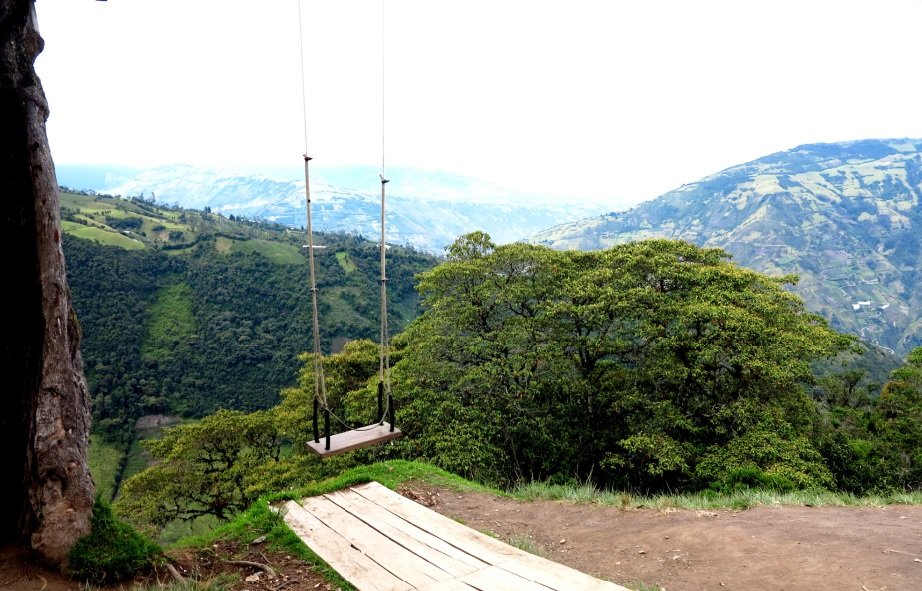 Safety first with that waist strap

Looking for more Adrenaline fueled experiences on your travels? Download the Crooked Compass Travel App to book or for further inspiration.