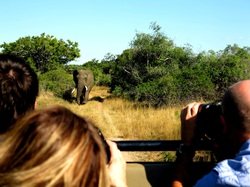 An elephant trails our vehicle

The African dream is to witness the ‘Big Five’ on an African safari, but which is the best way to experience this and allow you to tick it off your bucket list? Enjoying game drives through the vast open plains of National Parks or within smaller confined reserves? Let’s take a look at the pros and cons of both.

Private Game Reserves or concessions, are just that – private. The owners of the land determine who can enter, how many vehicles are in allowed inside the gates at any one time and they create the rules and regulations.

Private Game Reserves have a high concentration of wildlife with the tracking and ranging crew knowing almost every animal individually by sight as well as knowing their habits, favourite thickets to hide under during the heat of the day as well as the animals’ daily routines and hunting grounds. They are true experts in their field.

The game driving experiences in a Private Game Reserve are about quality viewing, not quantity. Generally speaking, a maximum of 3 vehicles per animal siting is allowed at any one time, with an unlimited viewing time, unlike the paparazzi crowds found around any sort of cat or kill in the larger National Parks. This provides you with a more intimate experience with the wildlife.

The hours within a Private Game Reserve allow a much more comprehensive game drive as you can enter and exit the park as you see fit. You are not restricted by National Park laws and timings. This permits you to witness sunrise and sunset as you watch lionesses chomping away on their twilight kill or leopard slinking around low in the grasses waiting for their early morning prey. Night game drives and walking safaris are all possibilities that you have open to you in Private Game Reserves which expand and heighten your safari experience and which are not always available within a National Park. If you have dreamed of taking that perfect silhouette iconic African photo of an acacia tree with a giraffe wrapping its tongue around the thorny branches and a rich African sky as the backdrop, a private game reserve is the place to do this, as National Parks require you to exit the park gates by 6pm – quite often this is well before sunset.

Within the rules of the National Parks, you must stick to the roads and the company you are travelling with can potentially lose their safari licence if caught off road. With a Private Game Reserve, you can almost feel the breath of some of the wildlife – you can get that close. Some people will disagree with bashing down trees and crunching bushes to catch a glimpse of a fleeting leopard, but for many, the opportunity to be this close to an animal in the wild is an adrenaline rush and what they expect. The park is yours to bush bash and get as up close and personal to the animals as possible. Trees and shrubs will rejuvenate. This is the mentality of some Private Game Reserves. 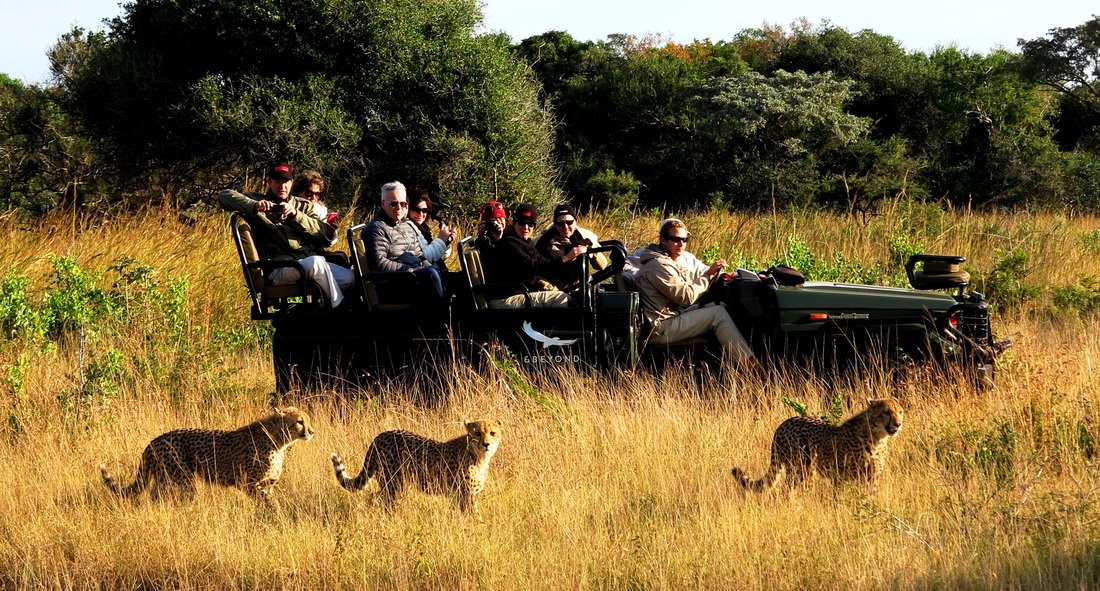 Cheetahs walking alongside one of the trucks

In National Parks, you must keep a certain distance from the animals and hope your camera lens is strong enough. The trees and grass will be in tip top shape, but sometimes the longer grasses can obstruct your view of animals lazing in the long fronds. Within a National Park, you can only spend a maximum of 5 minutes at each siting. This is in place to avoid disturbing the animal too much and to help manage crowd control as there is no limit to number of vehicles in the park at any one time, let alone at a sighting.

National Parks do offer some of the world’s greatest spectacles not on offer in the smaller Private Concessions, such as the Great Migration and the calving season of the wildebeest. Keep in mind that these draw card spectacles attract record crowds with them. This is something you should be prepared for. Many travellers save a lifetime for their African safari dream of witnessing the famed river crossing in the Masai Mara, only to come to the realisation that so has half the world’s population and the battle for the best photographic position is often not a friendly one.

Many travellers are often quite specific with the types of vehicles they wish to safari in. The open top 4X4’s are only available within Private Game Reserves. Within National Parks, you will see a variety of rickety pop-top vans, huge clunky overland trucks, through to pop-top Range Rover luxury vehicles. Open top vehicles are generally not permitted within National Parks.

The quality of the guides varies as well. If you are after an absolute expert on the park you are in, and you wish to know the ins and outs of the wildlife, plant biology and the biodiversity of the park, a ranger who can read the call of a monkey and instruct you that there is a leopard 500m in a north west direction and locate that leopard within minutes, then a Private Game Reserve is for you.

National Park game drives still have a certain level of expertise but unless you are safaring with a local ranger, it may have been weeks or months since your guide was last in the park.

The game viewing experience itself is extremely different from both sides. If you love the thrill and anticipation of watching, waiting and hoping, then a National Park is for you. The rush of chance encounters and near misses are what gets your adrenaline pumping on a game drive.

Private Game Reserves tend to know where the majority of their animals are at all times with the rangers simply radioing each other and directing each other to the wildlife. The thrill is not there and at times, it can almost feel scripted.

So which would you prefer? Patience and excitement or guaranteed game viewing but knowing that you probably won’t see a kill or a chase because the animals are already being watched and monitored. This isn’t to say that you won’t witness a chase or a kill, but it is less common due to the heavy tracking of the animals.

There are so many options to weigh up when planning that perfect African dream holiday. If time and costs permit, why not experience both and you can be the judge of which is the better experience. Either option is sure to bring you a lifetime of surreal memories and experiences you never thought you would have. 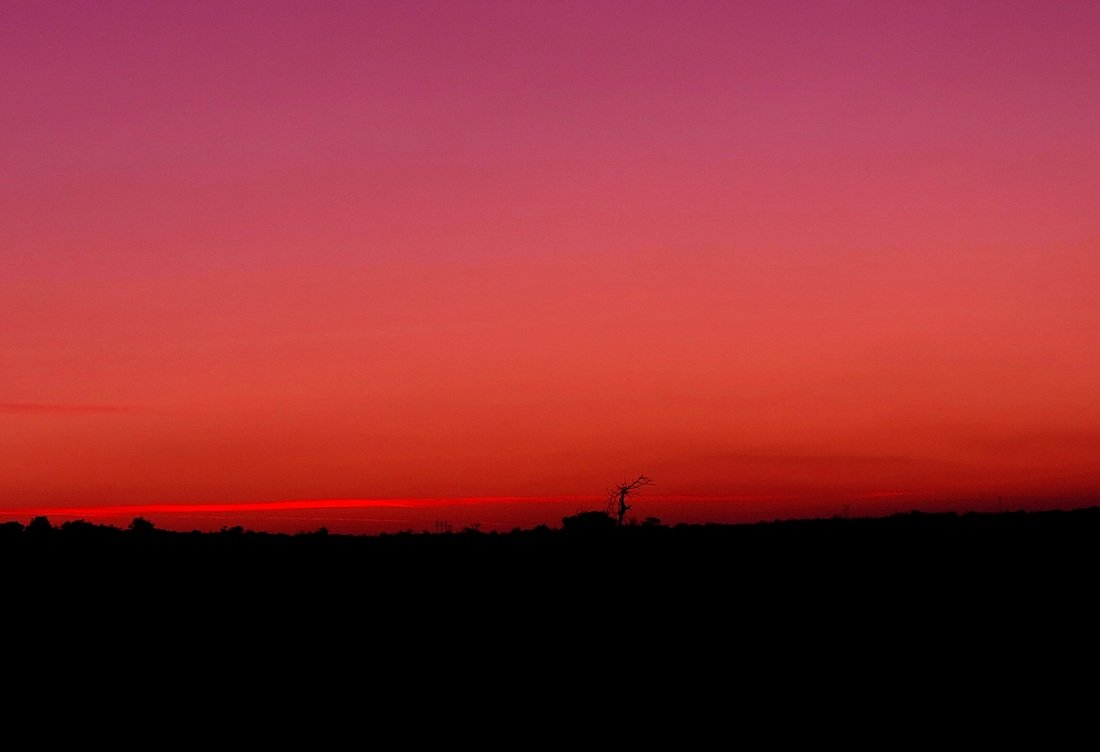