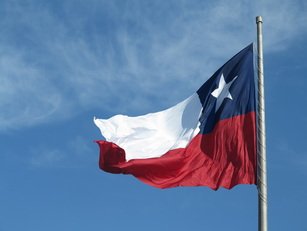 In any town or city, neighbourhoods and buildings teach us about a cultures way of using space, its interactions, its identity. Over years, layers build up, layers of history that we can pick apart and use to understand cultures and traditions.

Bordered by the jagged snow-capped Andes, Santiago is an eclectic mix of old vs new. French art deco vs concrete slab buildings that lack any kind of lustre. Shanty suburbs vs sprawling mansions. As a first timer to Santiago, Chile, and with only a very short period of time up my sleeve, I was not interested in seeing the touristy cathedrals, museums and open plazas bursting with gimmicks for travellers. I wanted to discover the guts of this city. Feel its pulse and experience it like a local. 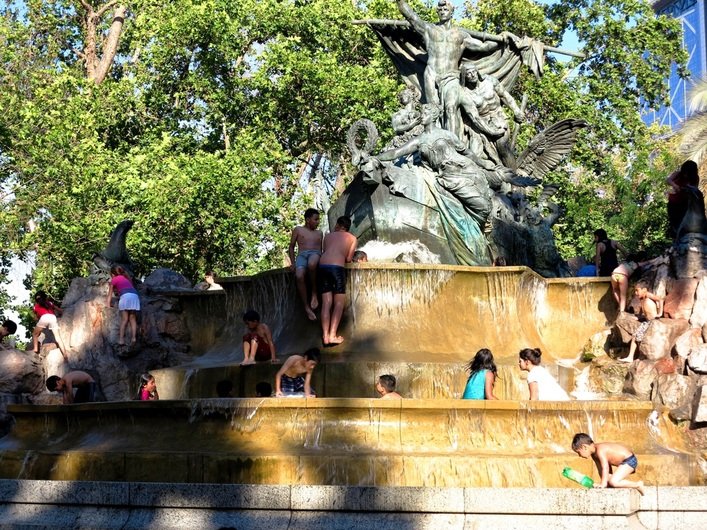 No space for pools in the city. That's fine. We'll just swim in the fountains

Jumping on my trusty two wheels, I set off with my local guide, Isabel, in search for the soul of Santiago. She assured me she would take me to districts that some locals didn’t even know existed.

Starting at Parque Bustamante, and making our way to the Plaza Italia, or Baquedano, I learn that locals believe if you live south of this plaza, you are deemed as poor, and north of the plaza, you are wealthy. Santiago itself is still a very financially imbalanced city.

Cycling through Parque Forestal, past stately palms, we pause to watch a handful of children swimming in the local fountain. There are not many public pools in Santiago and the heat of the city is stifling at this time of the year (December). Children frolic and splash about on the three tiers of the fountain without any cares in the world. 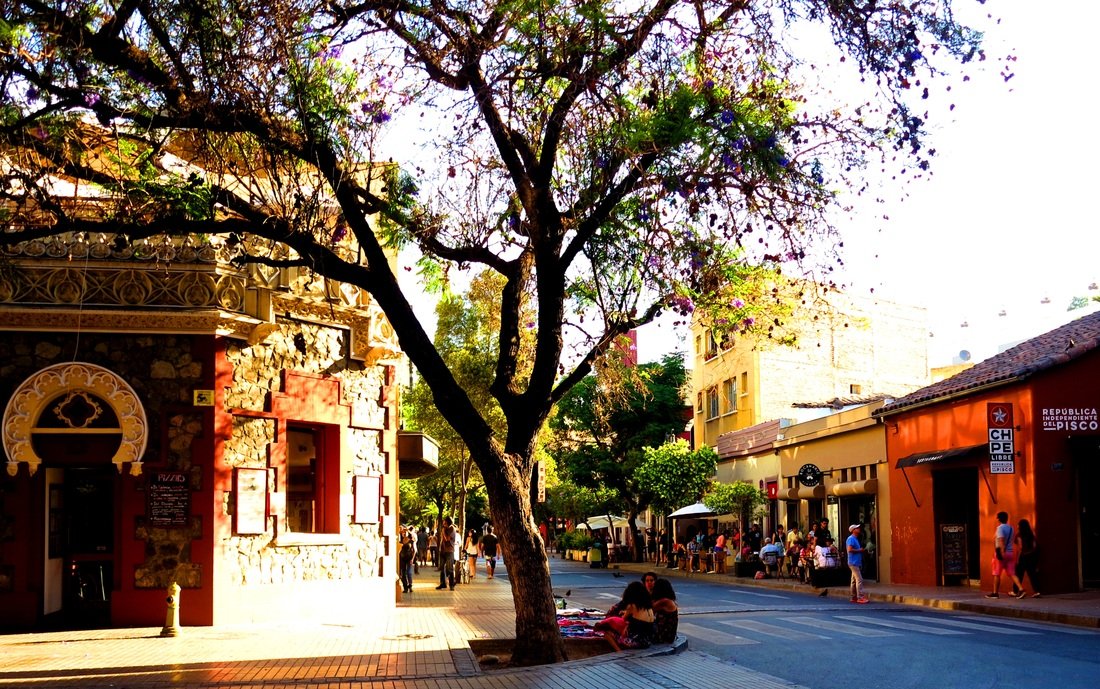 We veer to the left and down a narrow street. We take a breather and pause at Emporia La Rosa, a popular ice-cream store with queues down the street located at the start of the bohemian district, Barrio La Starria. Many guide books will tell you that this is the best ice creamery in Santiago. I tend to agree. The queues of local people winding down the street will also confirm this for you as well.

Barrio La Starria which has reincarnated itself over recent times, is bursting with art galleries, bookstores, music stores, cafes, theatres, bar and restaurants giving it a quaint European village ambiance. From La Starria, we circle around and pass the Museo Nacional de Bellas Artes.

Continuing once again through the Parque Forestal, the rushing brown river that divides the city runs alongside us. On the far side is the ‘poorer’ side of Santiago. Slum towns and shanty houses we are told. A few modern buildings are starting to pop up here, as locals are forced to build outside the city centre as the costs of living rises. This new area is called Patronato. 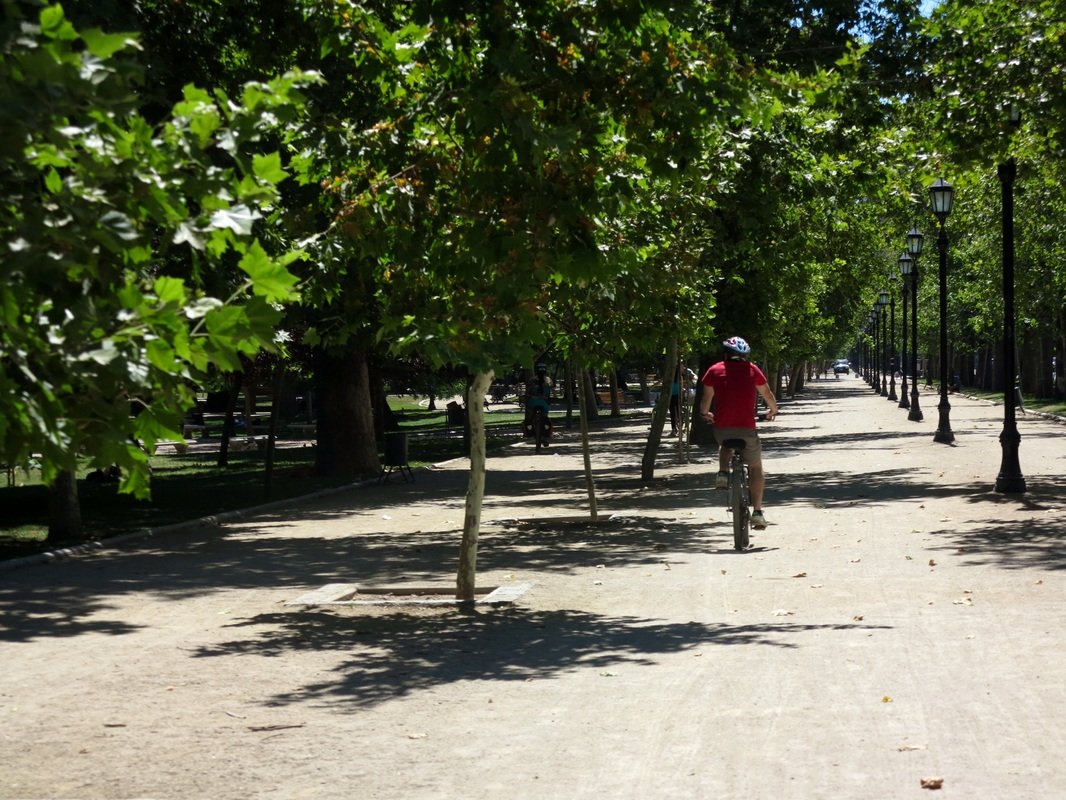 Cruising along through local parks

Over the road we make a brief stop at Estacion Mapocho which is heavily French influenced. No longer serviced by trains and now used as an exhibition centre, this station looked like a mini Gare Du Nord. Here we learn of the importance of infrastructure in Santiago and the amount of engineering that has to go into every building due the cities regular shake up with seismic activity.

As we reached the cross intersection of the Pan American Highway, we swung left and headed into a grid of quiet streets. Starting off through the Cumming area, we passed clusters of pastel coloured houses, all connected to each other like duplexes mirroring the houses on the opposite of these narrow laneways. There were about four streets of these low rise dwellings and at the end of each street was the threatening development of high rise complexes. Due to Chile being such a narrow country, there is not much opportunity to span the city outwards so as its population grows, the only way is up. 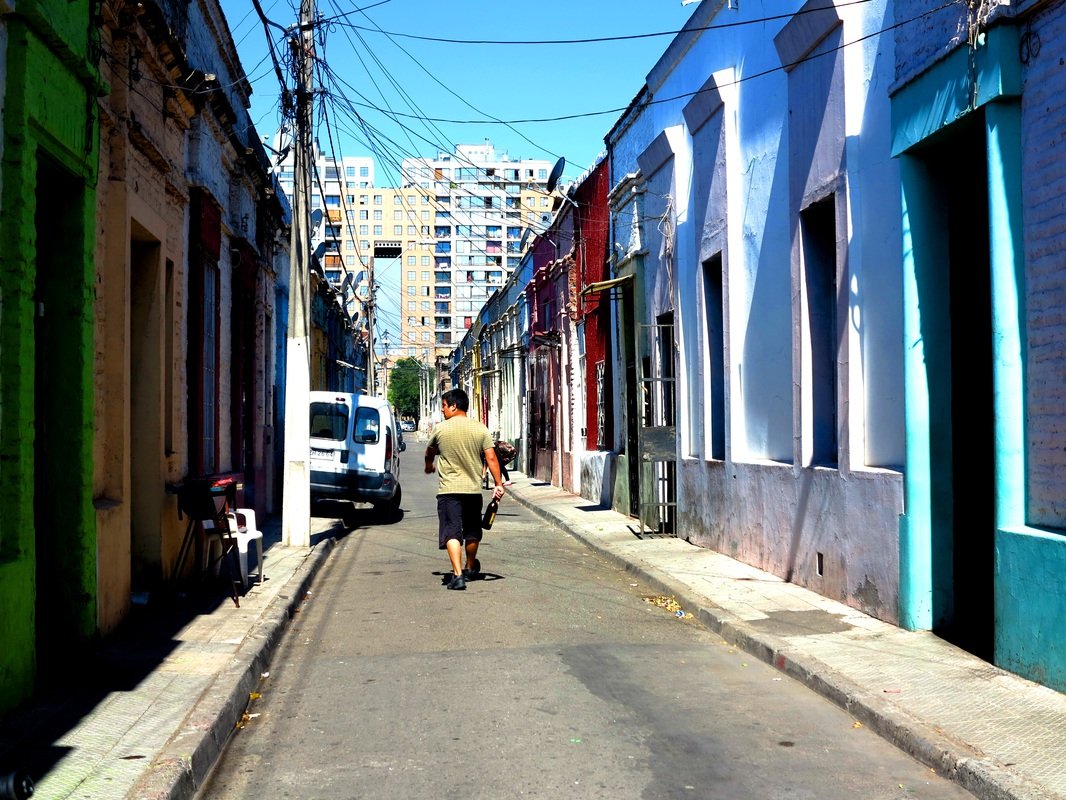 These local homes we were witnessing are a dying breed. In five years, they will not exist anymore. We rode quietly through these streets, taking in the locals in their worlds. Calling out to each other across small laneways from house to house. Street BBQ’s with large chunks of meat roasted on rusty BBQ’s made from half steel barrels, the earthy aromas wafting through the air. Music pumped from one of the houses, a thick latino beat pulsed through the street as the BBQ sizzled on.

Vibrant graffiti lined the walls, the streets were dusty and almost deserted.

Continuing on, we rode through the Brazilian Quarter. An area that has always been known as a ‘slum’ but which our guide told us will soon become the next hip and trendy area in 10 years. A few outdoor cafes line the streets, but only servicing local specialities. There is not a tourist in site. 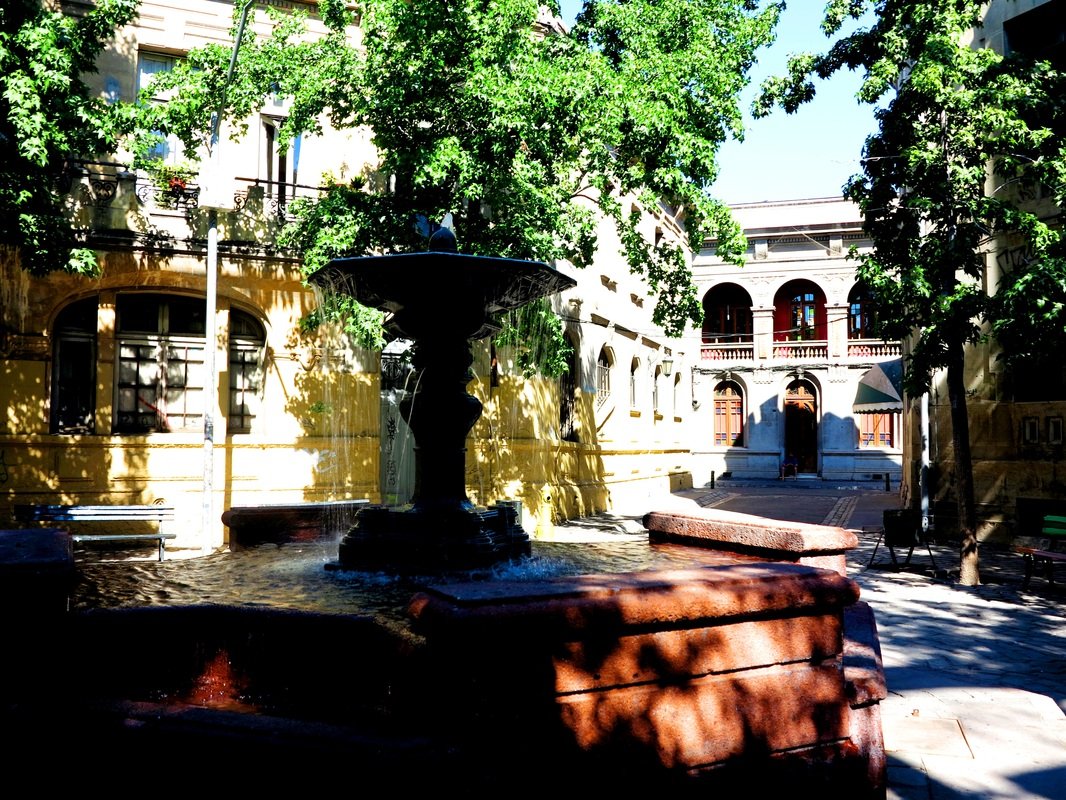 To the west of Plaza de Armas, this neighbourhood shows the different styles and stages of urbanisation in Santiago’s history. With a conserved identity and rich in cultural activity, these architectural treasures such as the Peluqueria Francesa (French Barber Shop) and the Teatro Novedades (novelty theatre) , the neo-classic and neo-gothic palaces on Concha y Toro and Brasil Streets create a strong ambiance of the wealth that once existed here in times gone past.

We weave our way to a small plaza, Plaza Libertad de Prensa in the Diecioho neighbourhood. Home to Chile’s elite during the 19th century, this area is a testimony from this era with its palaces and mansions. The typical icon of this neighbourhood is the Cousino Palace. This area has many emblematic buildings that compete with their beauty and spectacularity such as the Errazuriz Palace, the Iniguez Palace or the mansions along Republic Street, currently occupied by universities and professional institutes.

To cycle through these streets, seeing these mansions is to take a trip through history from the 19th century to the dawn of 20th century Santiago. This area of Santiago is also an area which is sure to disappear in the near future with the pressures of modernisation and the need for space, high rise complexes are sure to come in and take over this beautiful quarter soon enough.

Exploring Old Santiago, we biked through parks, along sidewalks and through narrow cobbled streets. 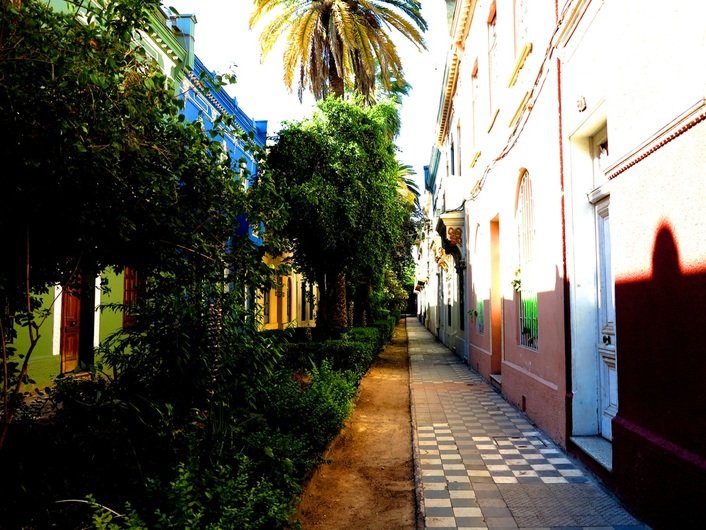 We reach a small gate way and turn inside. We are greeted with a stunning garden surrounded by two narrow alleys of brightly coloured colonial style terrace houses. Stunning architecture, this narrow strip is currently residential, but again, our guide tells us, that within 10 years, she feels this will become bars and restaurants.

We then arrive at the Quinta Normal Park which is Santiago’s answer to Central Park. Home to the Natural History Museum, thousands of local residents stroll through this park daily. Looking across the vast lawn, locals laze, sleep and picnic in the park. A man with a llama walks past as young men break dance to some thumping music drawing in the crowds. We chill on the grass for half an hour and take in our surrounds while sipping on a local Chilean drink of cinnamon, ginger and orange rind. 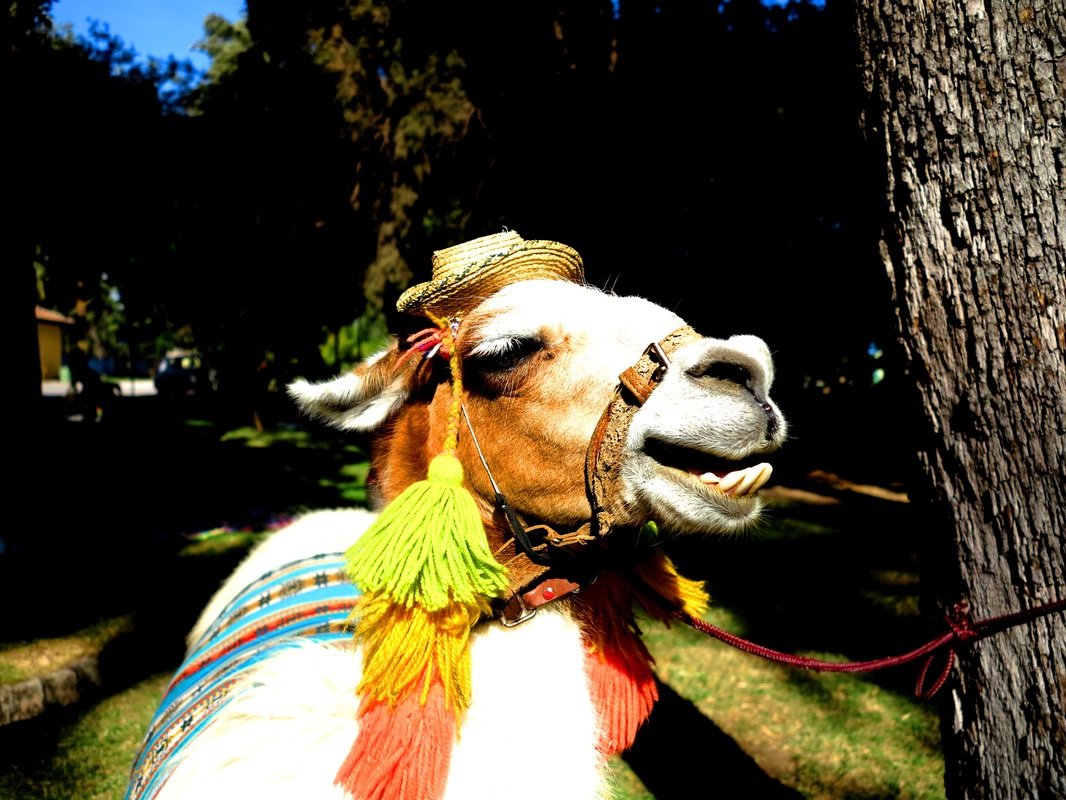 Back on our bikes, we cycle passed street vendors selling locals snacks, and make our way passed La Moneda presidential headquarters. A giant Chilean flag flaps in the breeze. Constructed at the end of the colonial period, it wasn’t until after independence that this palatial building became the seat of government. Designed by the Italian Architect, Joaquin Toesca, sadly this stunning building is most famous for being bombed during the coup d’etat in 1973. Zig-zagging through the back streets, we make our back to our starting point, as we cross through Santiago’s downtown area of pedestrian only shopping streets, bursting with the crowds of locals. 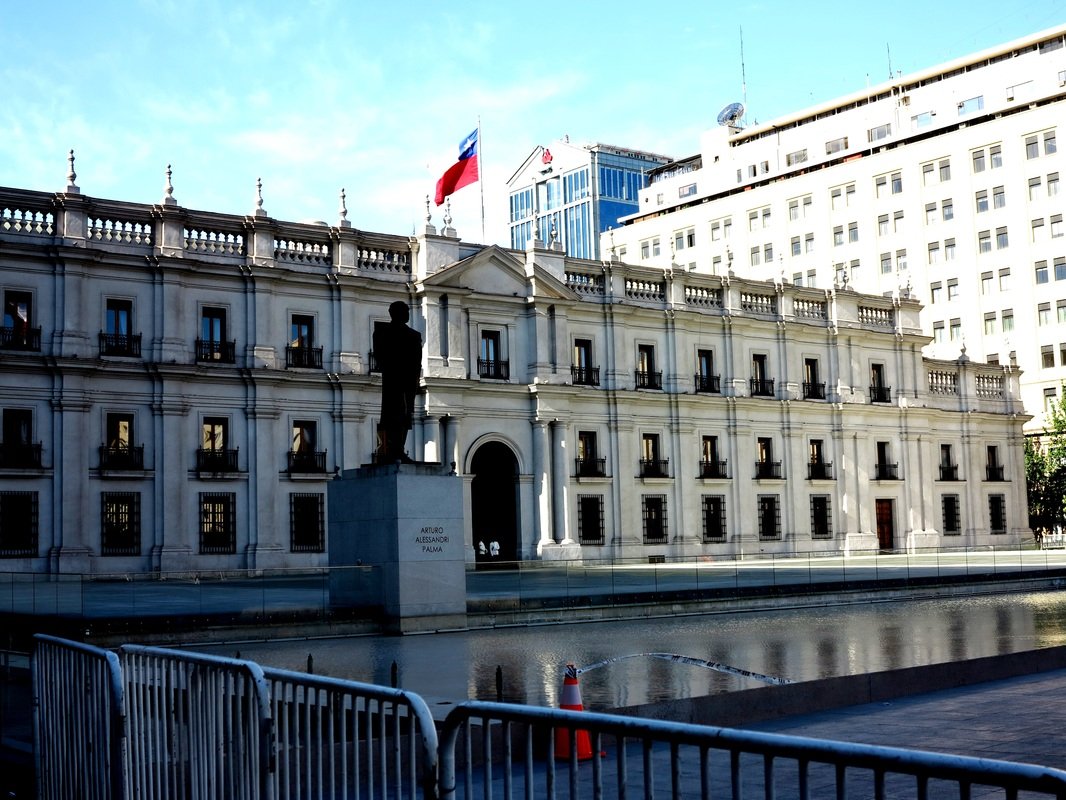 Having now witnessed the multitudes of layers that make Santiago what it is today and a glimpse into its past, I am excited to see what lies ahead as this city booms further and one of South America’s most vibrant cities starts to thrive as the economy and exposure of such a city grows. 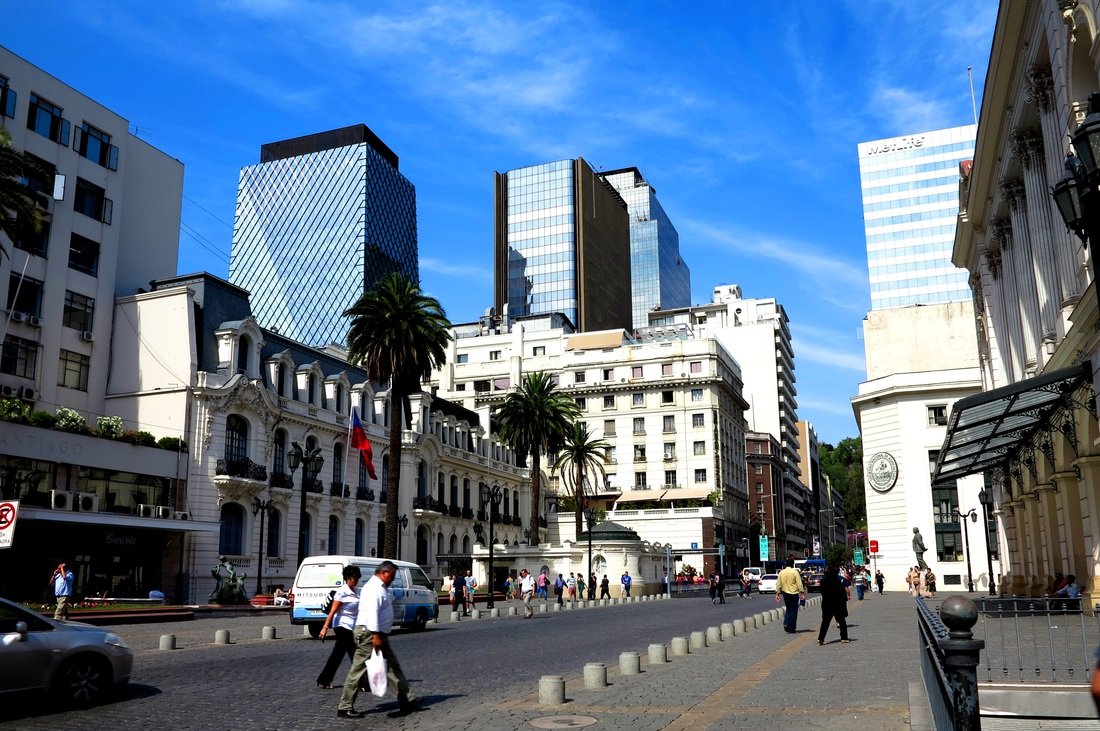 Looking for more Active experiences to have on your travels? Download the Crooked Compass Travel App to book or for further inspiration.