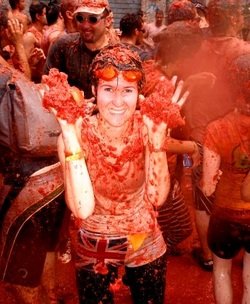 I've returned battered and bruised and possibly a little bit deaf with bits of tomato squished in my ears, up my nose, everywhere you can imagine.

The La Tomatina Festival in Spain gives new meaning to the expression 'playing with your food'. For most of the year Bunol is a ho-hum industrial town, 40km from Valencia, quietly going about its own business. But come the last Wednesday of August, the town's streets turns into a salsa riot, with over 20,000 revellers pelting each other with large, red, squishy tomatoes - Welcome to the World’s Biggest food fight!

The origin of La Tomatina is a bit foggy (along with my camera lens), but one theory is that one resident held a disliking for a particular town official and threw a tomato at him. It subsequently snowballed from there to become an annual event!

We were handed t-shirts with bulls-eyes on the back of them purely for tomato throwing and having somewhere to aim that wasn't someone’s face. We were then advised that we were now going to be given bathing caps instead of goggles as there was not enough for everyone. There was a huge uproar – no-one really cared less about having tomato in their hair. People were more worried about the burning from the acidity getting in their eyes not to mention the potential damage if you copped one straight in the eye at some force and of course, don’t forget the seeds!

Frantically, people went in search of somewhere to buy goggles. Funnily enough at 7.30am in Spain, there’s not really a lot open. I stumbled upon an unattended crate of goggles. I grabbed an armful and hurled them out to people, keeping a pair for myself and then running when the trip leaders came over ranting and raving to see who had started this carnage. People were pushing and shoving, trying to snatch pairs of goggles off each other, elastics broke and plastics snapped. It was on!

Departing Valencia, we headed towards the small rather insignificant town of Bunol. Most people were wearing several layers of singlets due to a warning about having your clothes ripped, some boys were in fluro orange tights with black gstrings over the top (of course they were Aussies). Bunol is only 39km away from Valencia so it didn’t take too long to get there. Upon arrival we headed through the town, down a hill into the cobbled and quaint main square. There were street vendors everywhere with their BBQ’s out, selling drinks, cans of beer for €1, cartons of sangria, paella and of course goggles. Goggles started at €2 back near the coach park and went up to €10 near the town square. Bars opened out onto the street, there was music pumping from every open door with Spaniards dancing, clapping and singing. The atmosphere was awesome!

We trudged down into town and went in search of the famed greased up pole with the prized ham at the top. As locals covered their balconies and houses with tarpaulins and plastic sheets, thousands of people including myself crammed into the small Plaza de Pueblo where locals from the balconies above hosed the crowds below and threw buckets of water on us. It was about 10am, a little overcast so not too hot… YET. In front of the church in the square, was a 10m pole greased up with fat and a huge Christmas ham on top – the prize! This ham hadn’t been reached or bought down in 3yrs!  All the macho boys took turns trying to claim victory and win. The problem is that they don’t wait for each other to take turns. They climb on top of each other, kicking each other in the face, standing on each other’s heads. There is no such thing as team work. It’s each to their own. If someone was doing well and getting close to the ham, some arrogant sore loser would grab them by the feet and haul them down. Nobody really got close and then there it was…. “BANG!”

11AM. The 1st truck of tomatoes slowly rolled its way down the street. Cheers went up as people eagerly awaited the 1st truck to near. These were huge dumpster trucks, full of tomatoes. The street is quite narrow. There was only 1m either side of the truck as it rolls passed and the crush factor can literally take your breath away! You cannot move as the truck passes and if it stops you’re in big trouble. On top of the trucks are local Spaniards pelting down tomatoes at you. You can’t move to defend yourself and dodge the flying tomatoes. The goggles do nothing. You cop a tomato in the face and it either pulls your goggles off or the juice seeps in burning your eyes and fogging your goggles up.

Once the truck passed, everyone crowded onto the road in its wake and picked up the tomatoes and slosh on the ground and just threw it at each other. If you’re standing back or against a wall you’re a huge target. Tomato squish goes everywhere! It’s all over your face, in your ears, up your nose. No nook, cranny or crevice is spared. It took out my belly button ring to avoid having it being ripped out and when I pushed it back through later on, tomato came out of it! Then there is another horn, truck number 2 is coming. This one stops right in front of me and I cannot move. I am wedged between 2 boys, one hiding his face with a hat and the other bending down to protect his stinging eyes. The locals have spotted these wimps and suddenly they are targets. This means I am also being sandwiched in the middle of them. We are showered with tomatoes, some not even squashed, and let me tell you, they bloody hurt, especially if it’s a green one!! The locals are throwing them from their balconies and the crowds are throwing them back. Tomatoes are splattered all over the church and locals homes. This truck decides to unload its tomatoes in front of us and suddenly we are ankle deep in salsa.

As bus 3 toots towards us, everyone is kicking around the juices and throwing wet t-shirts, thongs and of course tomatoes, then a cheer goes up and everyone suddenly stops momentarily and turns. There is a girl in a bikini climbing the pole with the ham, the guys are actually helping her up and surprisingly not groping her or ripping off her bikini. She is being absolutely slammed by tomatoes, t-shirts and more tomatoes as she holds on for dear life and reaches for the rope around the ham. She grabs the rope with both hands as it doesn't budge. She lets go of the pole, her whole body weight on the rope and still no movement from the ham. What she doesn't realize is you have to lift the ham up over a hook to get it down. Exhausted and probably blinded from the tomatoes flying at her, she makes a grab for the pole and slips and crashes speedily to the ground. A cheer goes up and everyone turns back around and continues throwing tomatoes. Several more trucks come down the street repeating the same procedure.

After the last truck has passed, there is more room to spread out, people attempt to swim in the sauce bath and the guys start getting stupid and tackling each other and knocking people over. And once you’re down, you’re down. You are suddenly surrounded by hundreds of people throwing tomatoes at you, kicking the mush all over you. Now completely covered head to toes, inside and outside, the sun is starting to dry the tomato caked in your hair. Girls with freshly shaved legs are screaming that it stings as I try to call out to someone I cop a tomato right in my mouth. So gross! People now have buckets and plastic pint cups and are scooping up the muck and just tossing it on everyone. It’s raining red and we are blindly pushing our way through the crowds. “BANG!” 12 noon.

The second siren sounds and the festival is now over. An hour of chaos and carnage is over and the mayhem complete. Locals hose the sea of tomato stained victims below as the streets which are now more than ankle deep in tomatoes are washed clean with fire hoses. We wind our way through the narrow back streets and I manage to get hosed off 5 times, shedding some layers of clothing as I go, before making my way back to the bus. My hair is now caked with bits of tomato that are drying and hardening by the second. A poor lady dressed in white high heels, designer clothes and a flashy handbag who obviously forgot what day of the year it was, wades her way through the slush, her attire now ruined as people hurl tomatoes at this fairly clean looking individual.

I sit for an hour or so trying to pick the dried tomato out of my hair which now looks like some kind of weird chilli flake looking dandruff before getting changed beside the bus and ditching my clothes. The bus pulls out an hour later leaving behind a tomato stained Bunol and the locals are seeing red and scavenging through everyone’s clothes they’ve left behind, taking what can be salvaged. Some of the boys have noticed they have tomato dreadlocks under their armpits. It’s back to Valencia and its stinking hot and literally we are all stinking. I head to McDonald’s to use the bathroom and suss out my plastic hair in the mirror that looks like it has spew through it. It’s over 30C in Valencia and this means stench galore. Rotten tomatoes baking in the sun is not a pleasant odour.

I decide to head to the airport early and go straight to the bathroom where I whip out my shampoo and conditioner and wash my hair in the basin. The water is orange and I’m sure there is a whole vine of tomatoes now clogging the drain. I towel dry my clean hair which obviously isn’t as clean as I had hoped as now my towel is orange as well. Gunk keeps oozing out of my eyes every half an hour or so and I still reek of rotten tomatoes since I haven’t been able to have a proper shower. Luckily the guys on the plane next to me were also heading home from La Tomatina. They were still covered in bits and pieces and so we all stank out the back of the plane together.

It was such a fantastic day and I would definitely recommend it to anyone who doesn’t get claustrophobic or is allergic to tomatoes! Ole!