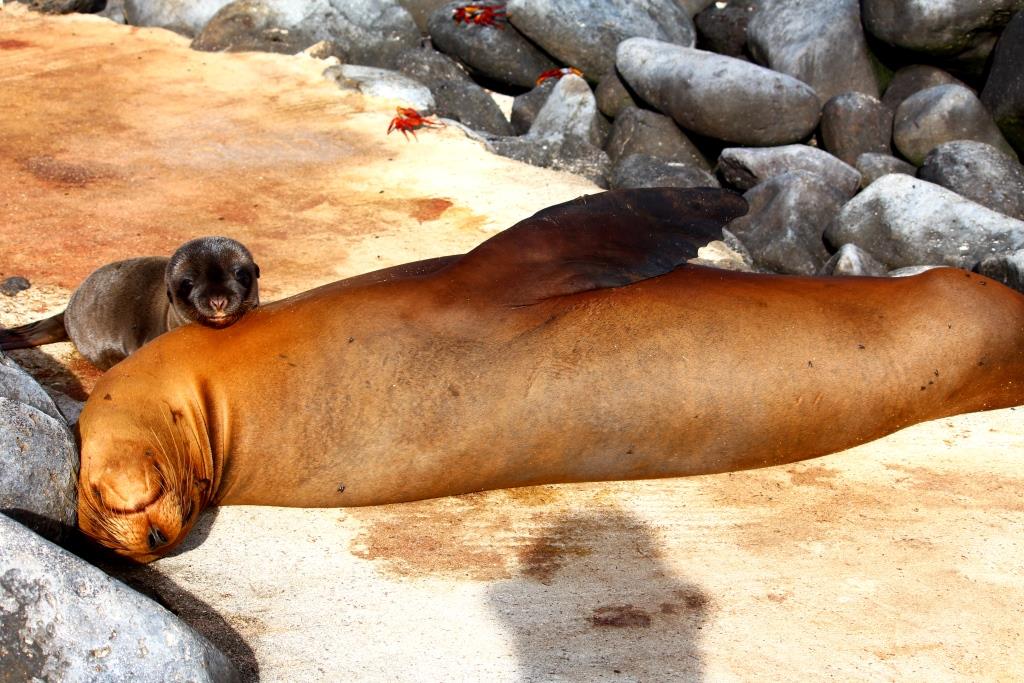 Mum and pup greet us off the panaga

Tripping over animals is how I would describe the start to our day. We were now on the stunning island of Espanola - a low lying rocky outcrop of crumbled lava stones and large boulders bordered by a moat of turquoise water. This island offers the highest rate of endemic species in Galapagos.

Sea lions greeted us with their noisy dog like barks, as curious Hooded Mockingbirds pecked at our shoelaces. From the moment we set foot on Espanola, we had to make sure that we were not setting foot on an animal. Our first point of call was Punta Suarez. 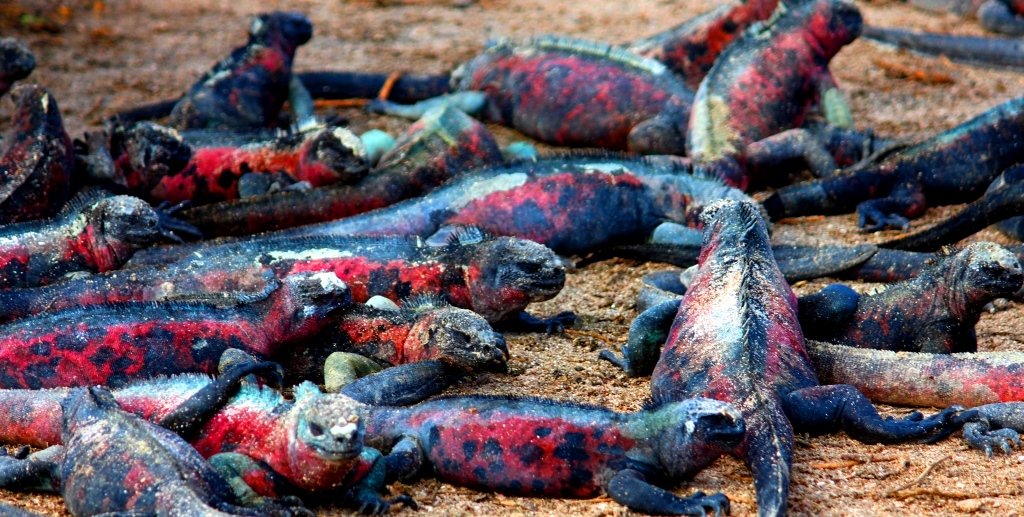 Piles of Christmas coloured marine iguanas were just that… piled on top of one another. Their rough black skin highlighted with splashes of vivid green and red caused by algae that grows on their skin. The green from the cooler waters and the red from the warmer. They were beautiful. Sea lions, both mamma and pup block our walk ways and lava lizards zipped in and out from under our feet. 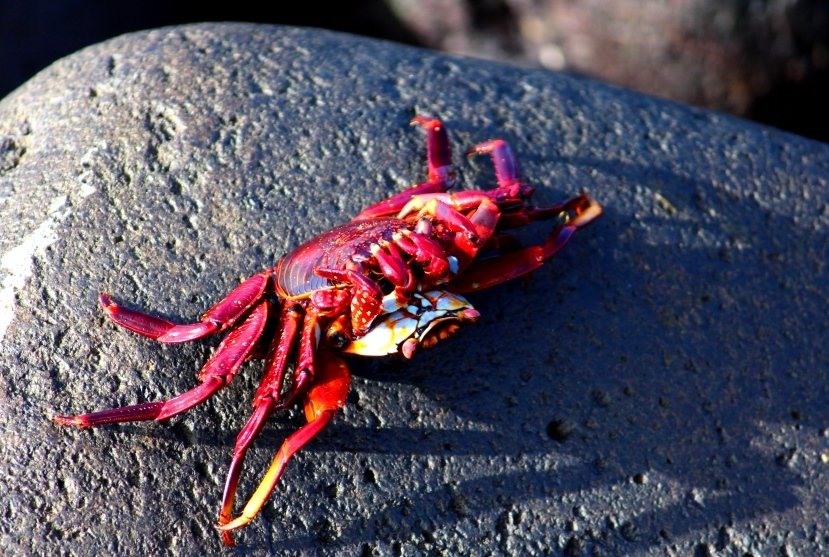 We came to a small beach where playful sea lions dipped and zig zagged through the waters, riding on waves, twirling and showing off for us as we stood by watching in awe.

Brightly coloured Sally Lightfoot crabs were breeding on the dark lava rock formations whilst other stray crabs clambered carefree over the spiny backs of the placid marine iguanas. 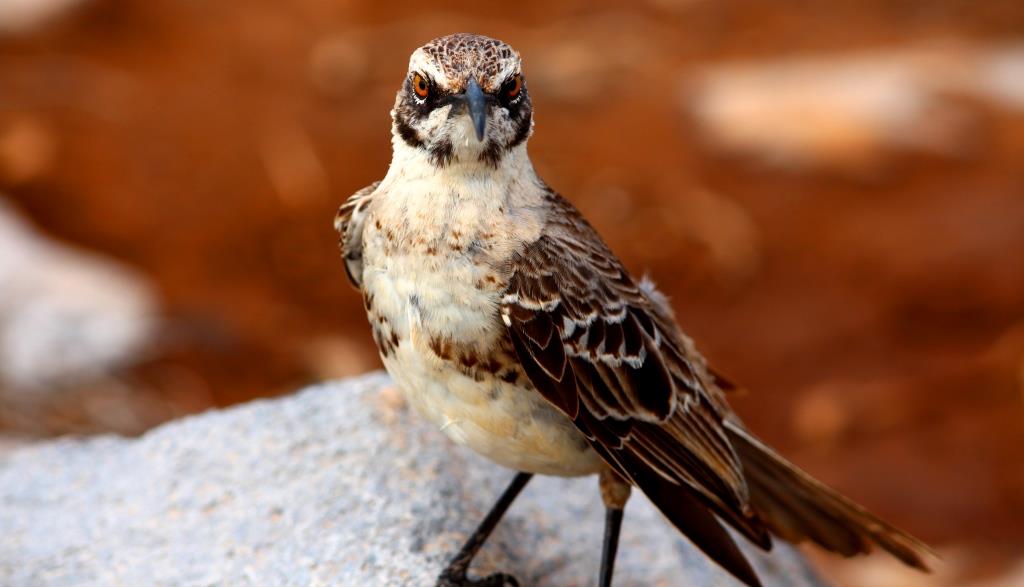 Small herons, known as the ‘Galapagos vampires’ due their prey like nature picked whatever they could from the backs of the iguanas as well as following us around like shadows. We all kept one eye on these little monsters!

Continuing our hike, leaving the beaches behind, we headed inland on a slight gradient. The terrain was fairly flat but extremely rocky and uneven. Surprisingly, even at the top of cliffs, we had sea lions blocking our paths, sleeping lazily in our walkway, completely oblivious to us as we stepped gently over them.

As we hiked higher, we came to the nesting area for the Nazca Boobies. We watched with patience as they slowly created their nests, one stone and twig at a time. We were also lucky enough to witness them mating even though the entire performance lasted less than 30 secs. Their pure white bodies with green/grey splayed feet were stunning against the dry background. Not quite as vibrant as the rare red footed boobies we had seen previously, but amazing in their own unique way. 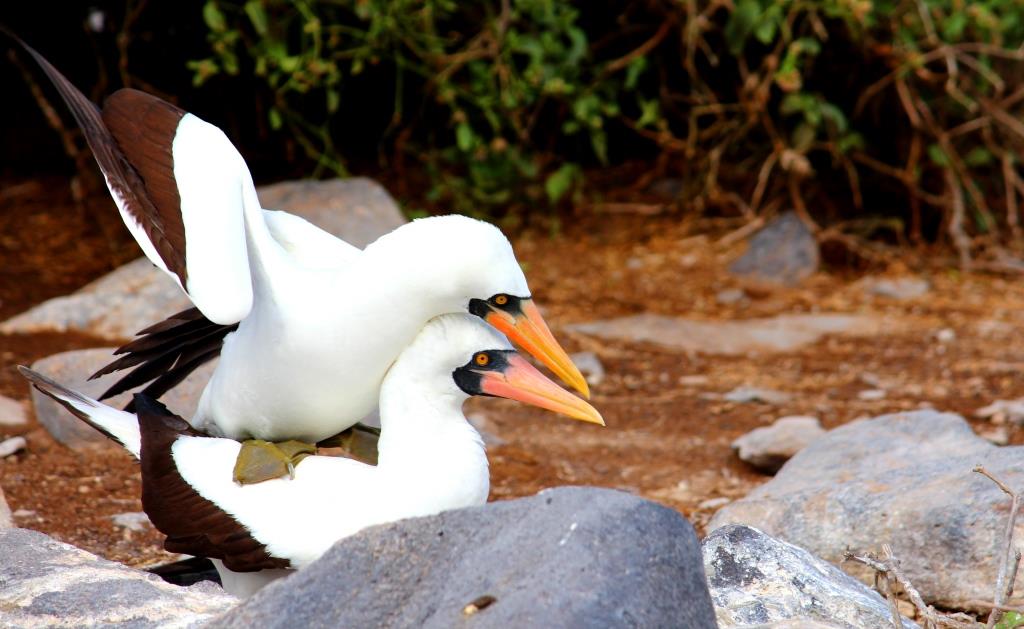 Woosh!! Incoming! Suddenly a random Blue Footed Boobie appeared from nowhere and landed right in front us as if to say ‘Hey guys, it’s my turn now. Take a few shots of me’. He paraded around like he owned the place and he pretty much did as we all followed him with our eyes and camera lenses trying to snap the perfect shot of those vivid blue feet. 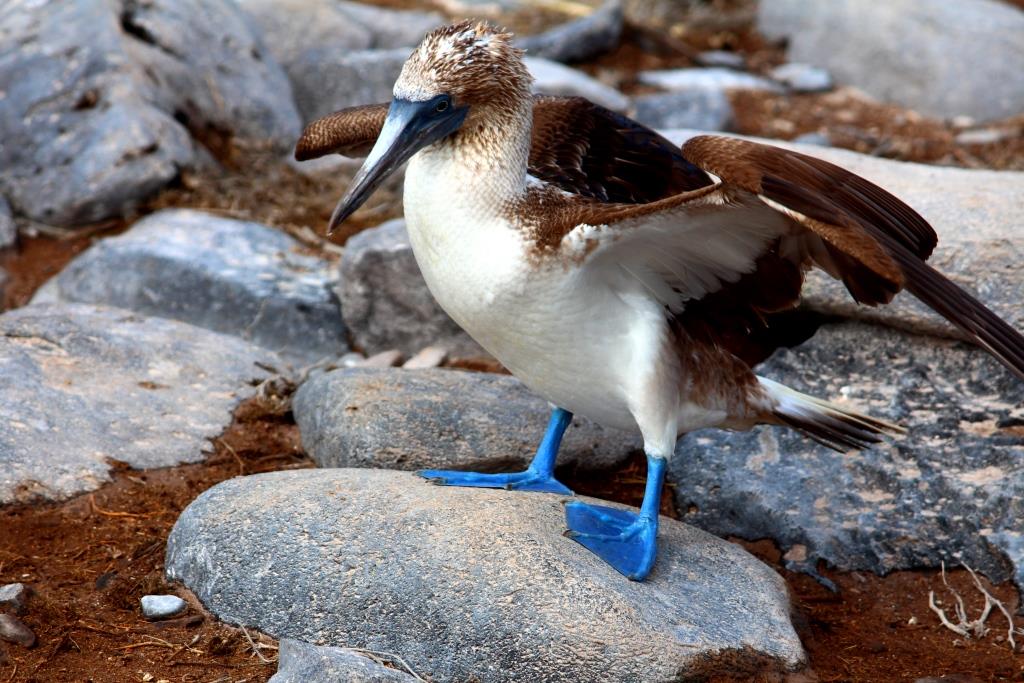 As we scaled and descended, we passed skeletons of iguanas, birds and other island life that had finished their time on the Galapagos including some abandoned albatross eggs and sadly baby sea lions.

Several Galapagos Hawks and an Albatross circled overhead as we explored the island – perhaps waiting to see if one of us strayed behind… perhaps we could be their next prey? They certainly looked large enough to swoop one of us away with their fierce claws. 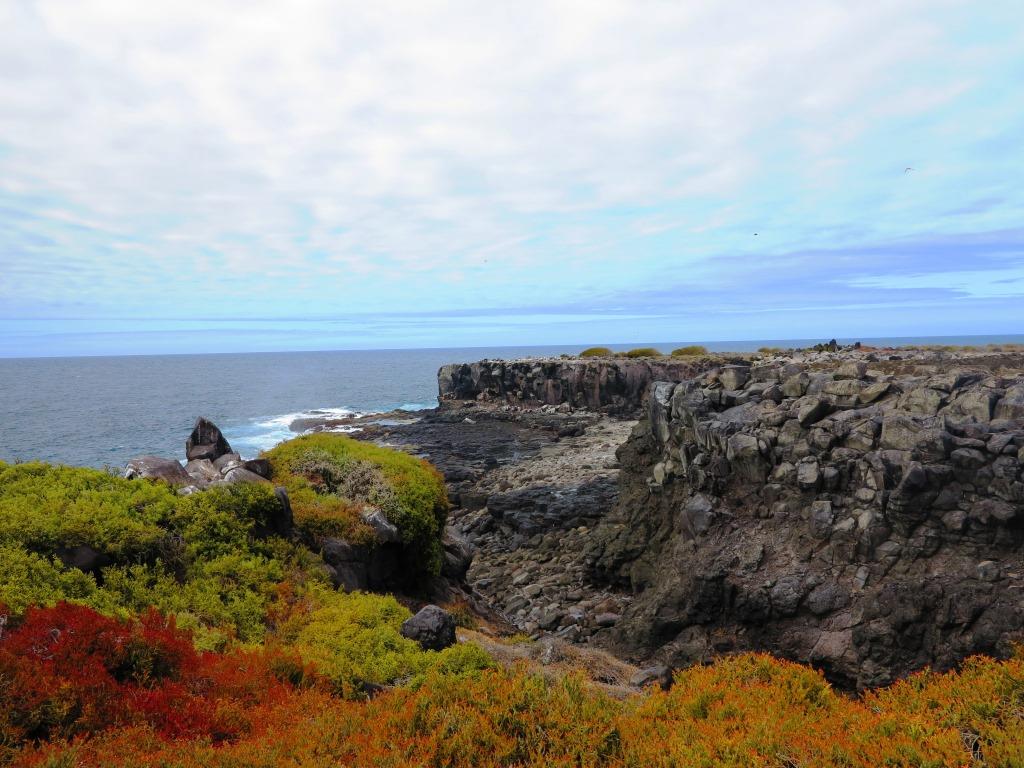 We came across some young albatrosses. Not quite ready to take flight yet, as they were still weighted with their fluffy down or chick feathers. This did make for some amusing photos though as they had lost their feathers over most of their body except for their heads which gave them great mullets and 80’s perm style hair do’s. One of them even only had fluffy eyebrows left, so I named him John Howard. 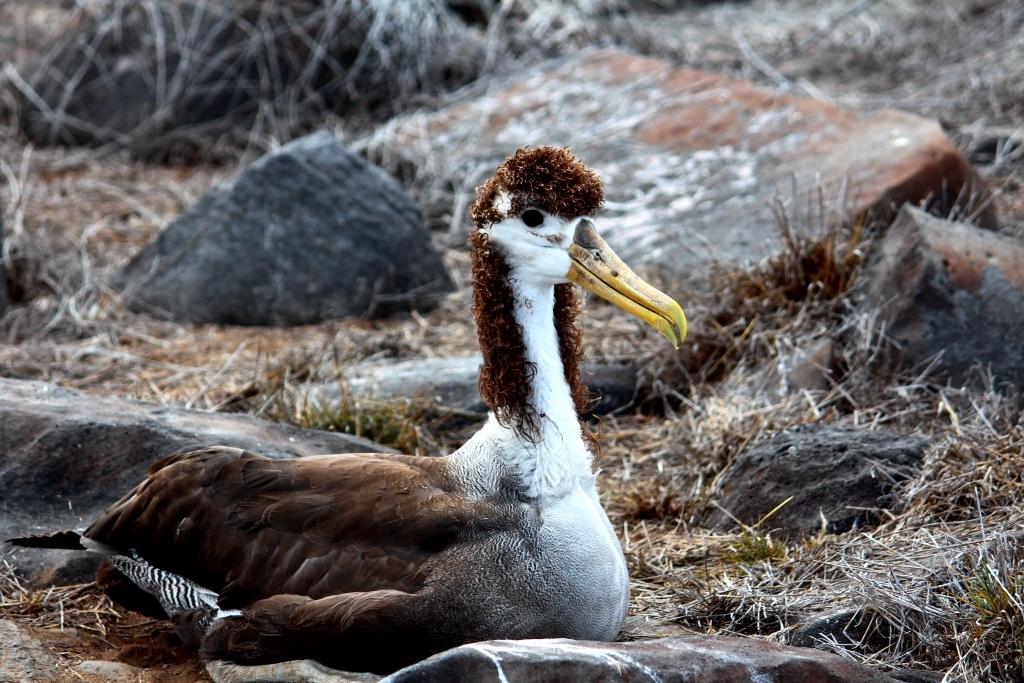 Stepping back into the 80's

As we headed back towards our pangas, we witnessed a blowhole caused by a crack in the solidified lava below. I was secretly hoping to see a marine iguana get spurted upwards like a photo we had seen the evening before, but it was not to be.

As we boarded our pangas, we had the sea lion pups once again calling to us and the juveniles frolicking in the waves surrounding our panga. Marine Iguanas popped their heads up from the vivid turquoise waters as we dodged to avoid them. 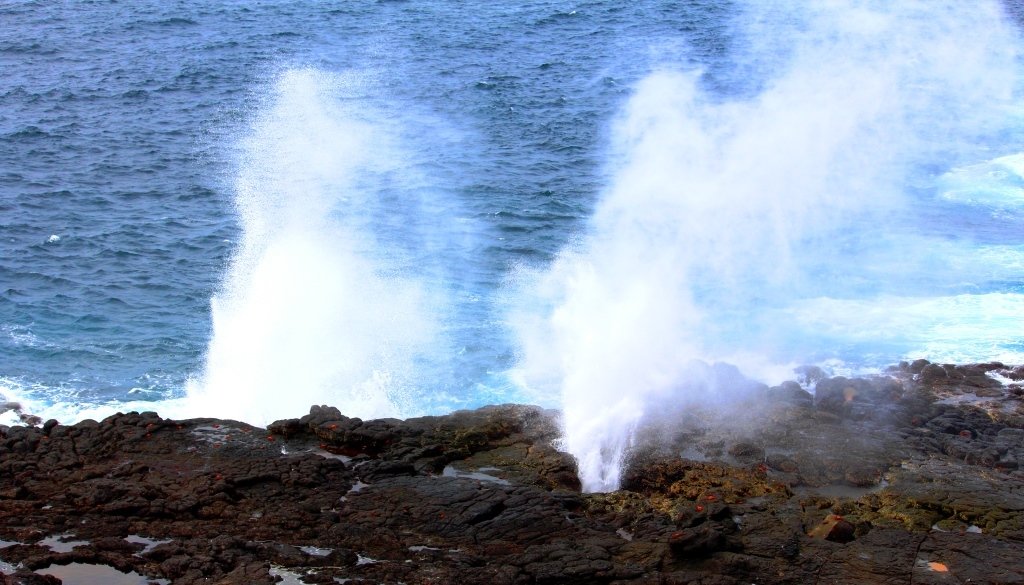 Following lunch, it was back onto the pangas and we headed towards a small island, Tortuga Rock. Here, we jumped straight into the clear waters. It was like glass. Sea lions frolicked around with us, so graceful in their underwater movements as they zoomed by, circling us. The visibility here was about 30-40m. The rocky lava under the water was light green in colour, covered with algae which the marine iguanas munched on. Large star fish the size of dinner plates splayed themselves on the ocean floor, sting rays flapped past while small octopus putted along in the undercurrent. 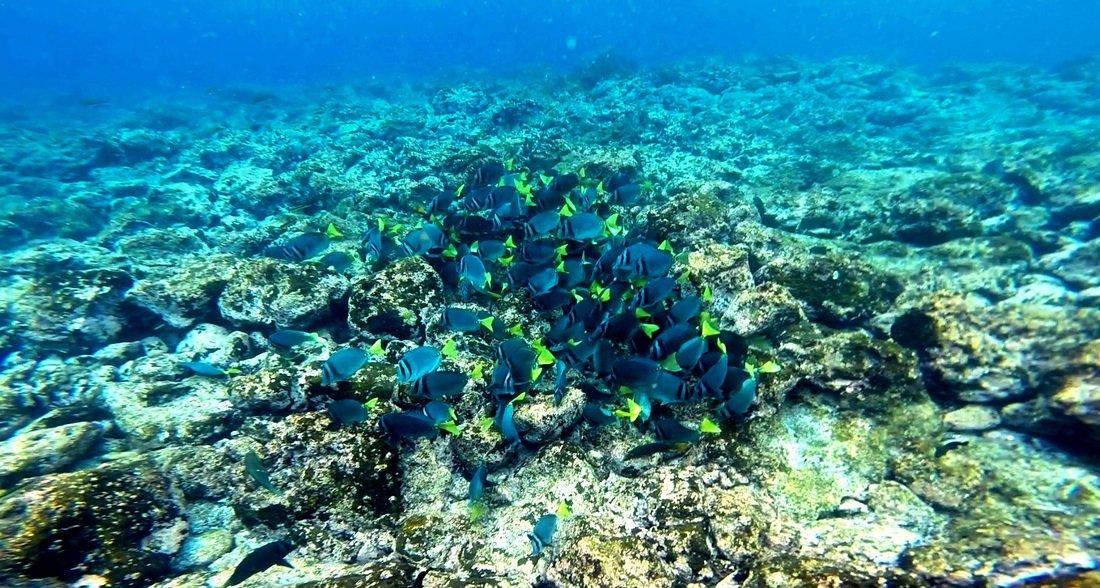 Caves had been well worn into the harsh cliffs, formations and schools of yellow tailed surgeon fish passed beneath us by the hundreds. The colourful diversity of sea life here was spectacular in the crystal clear waters.

Marine Iguanas clung vertically to the cliff chomping away on algae, their little teeth crunching away, whilst pelicans and small hooded mockingbirds waited anxiously for their next meal. 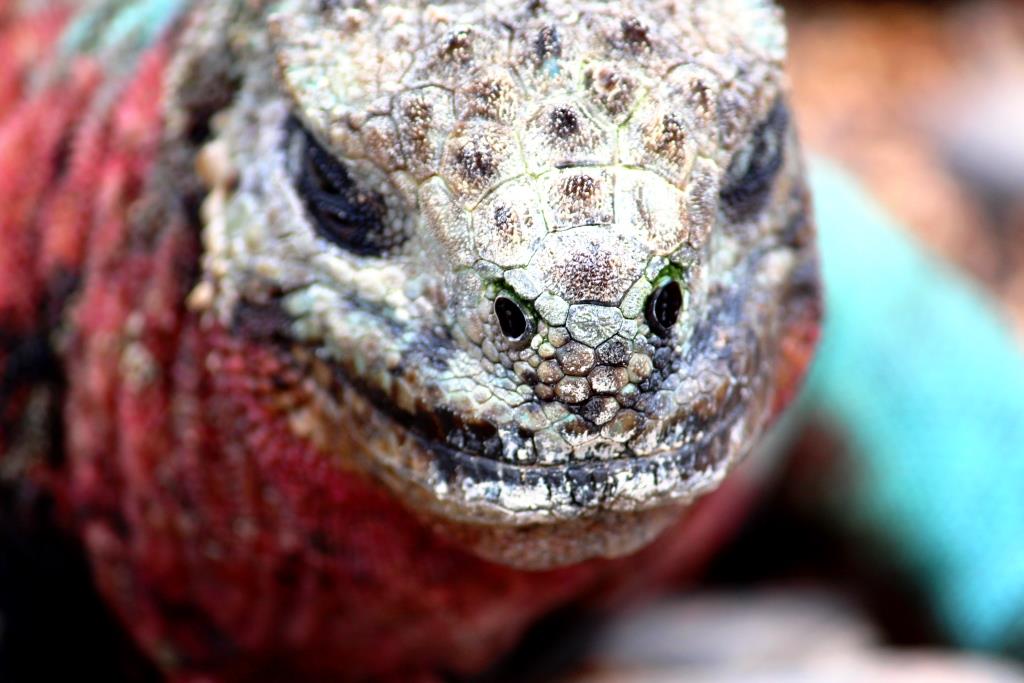 Up close and personal with a Christmas Marine Iguana

From here, we zipped over to Gardner Bay and took a stroll along the seemingly endless stretch of white sandy beach lapped by Bombay Sapphire waters. We encountered colonies of sea lions yet again, lazing on the beach and taking a dip in the shallow, balmy waters. There is no trail to follow here, so some of us swam and sun-baked, others discovered and explored what the beach front had to offer. 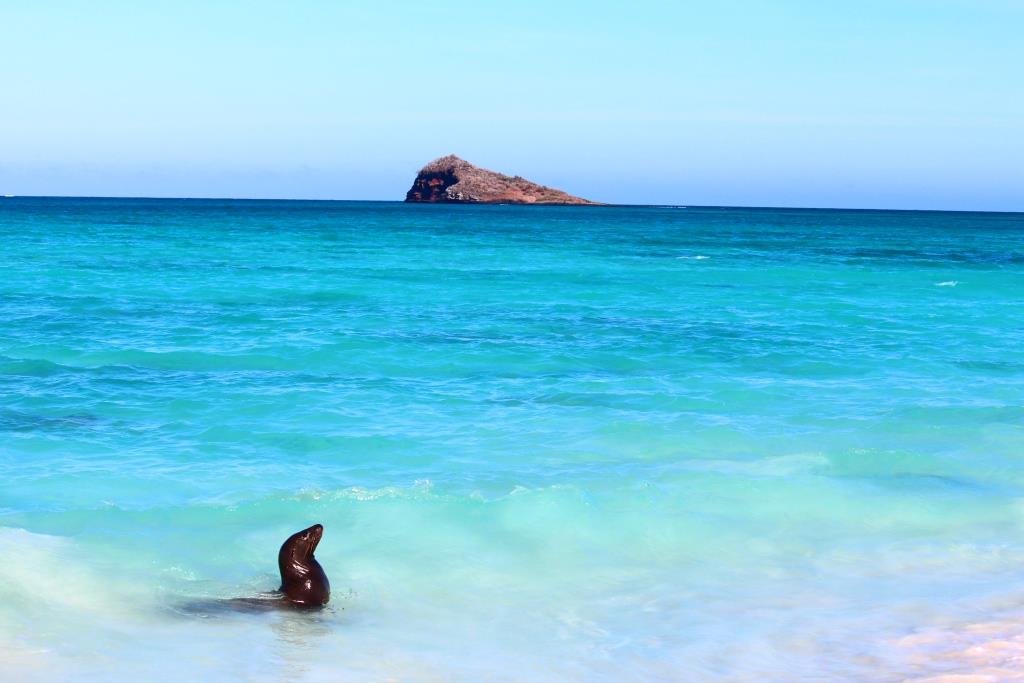 Pelicans soared in the sky above, plummeting into the waters with full momentum in the hope of catching an early dinner, annoying mocking birds followed you like a shadow and were not shy. They jumped on your bags, tried to open your drink bottles and did not move when shooed away. 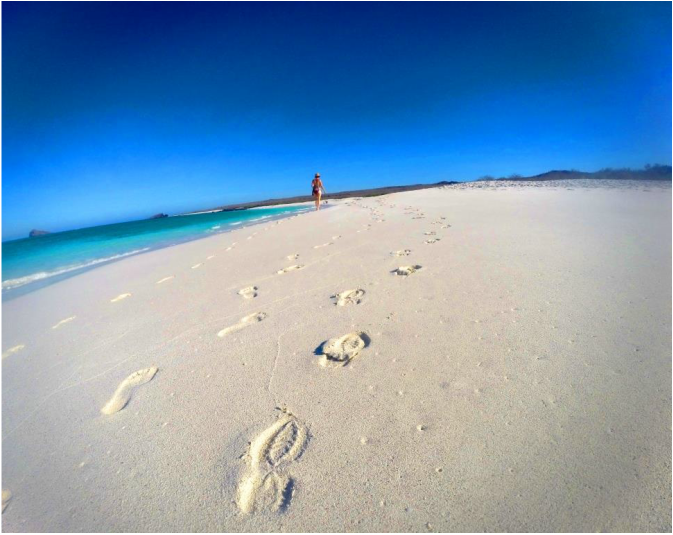 Some of the group took this opportunity to kayak in a nearby cove. We walked side by side along the water’s edge with a large female sea lion for about 200m. 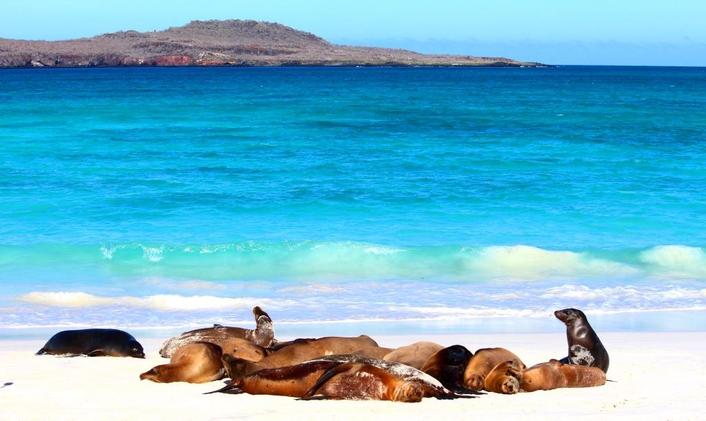 So many sea lions

Upon the return to our yacht, this evening the sky was clear of clouds. A velvet black with dancing sparkles. The stars as clear and bright as they could possibly be in this sea of darkness.