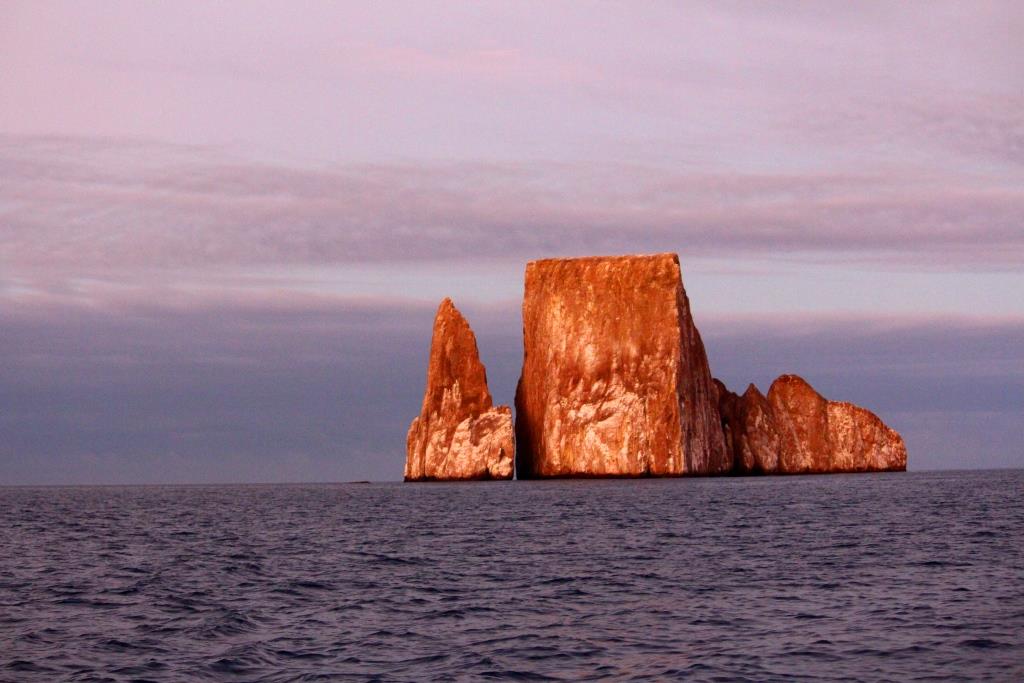 View from the cabin this morning

Peering out my curtains, a mauve sunrise greeted me. Arriving into Cerro Brujo, a breathtaking white beach, by wet landing (a wet landing is where you slide over the side of the side of the panga into the water, usually knee deep or so) and began a gentle stroll along the sandy shoreline which offered views to forever and amazing bird watching opportunities. 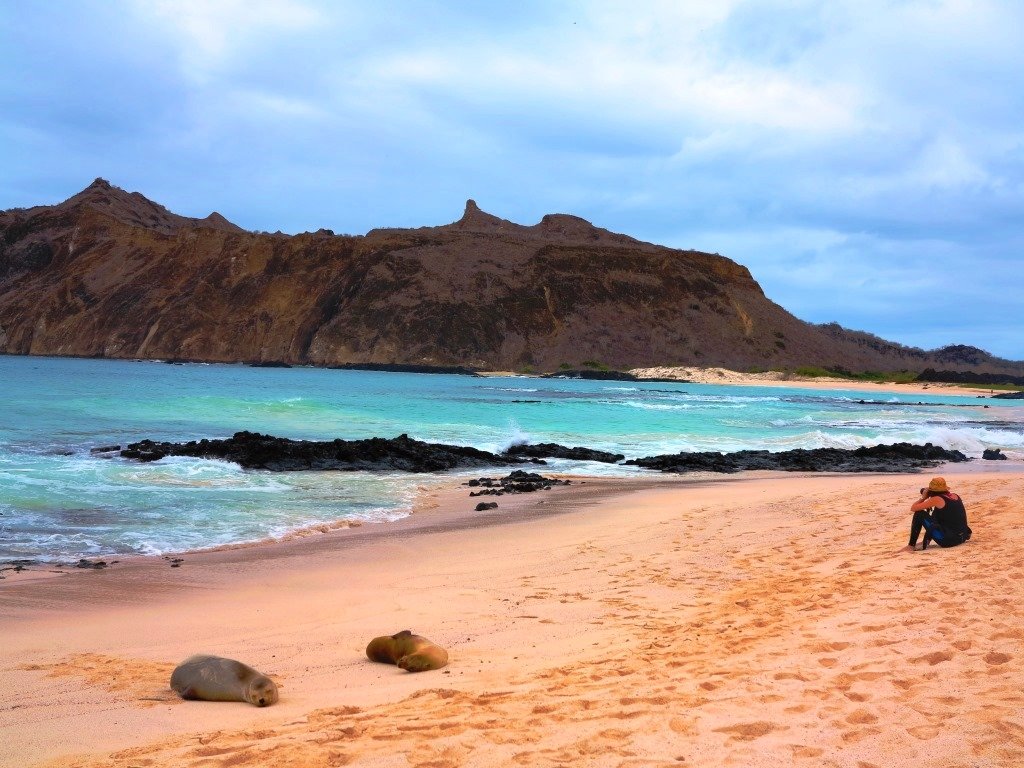 Families of sea lions dotted the shores as they lazed carefree, looking like large boulders, scarlet Sally Lightfoot crabs scattered themselves over the jagged lava. The rough ocean threw its force forth attempting to wash them off, but to no avail. They clung on with Spiderman like grip. 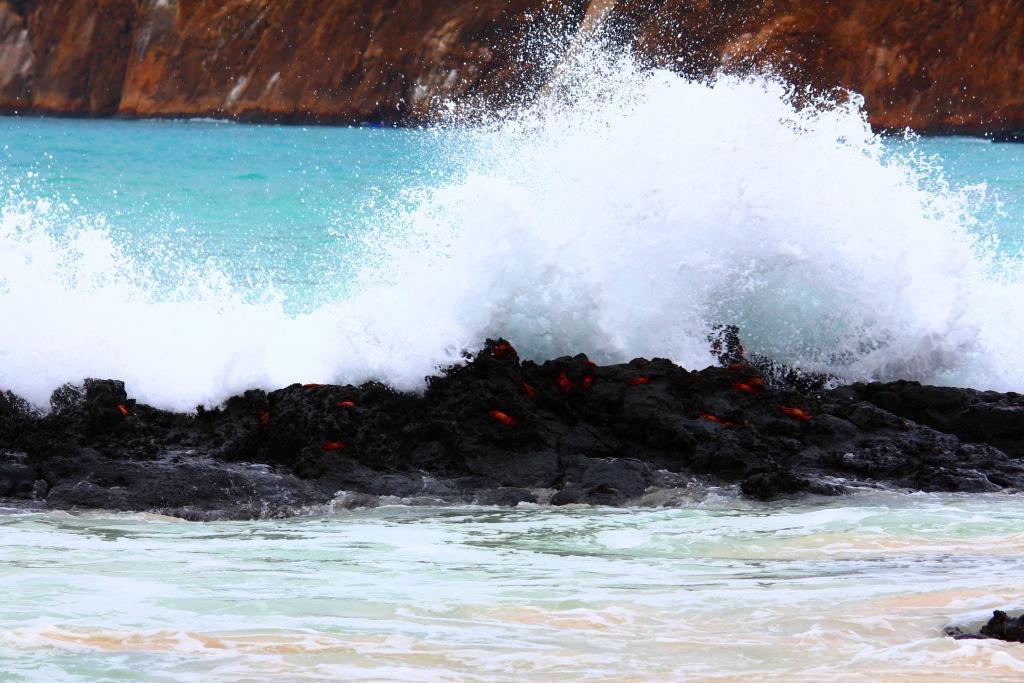 It was a casual, slow paced morning of discovery as we all walked at our own pace and took in what was of most interest to us individually. Behind the white sandy bay, bubbled but rigid rusty red lava had once flowed and solidified. Scattered sparsely with straggly bushes, only occasionally was there a splash of living green. Stark frightful cacti pierced the lunar like landscape, making it seem that simply by turning 90 degrees, you were in another world or perhaps on another island.

We were not to explore this area though. These were the sea turtles breeding grounds. 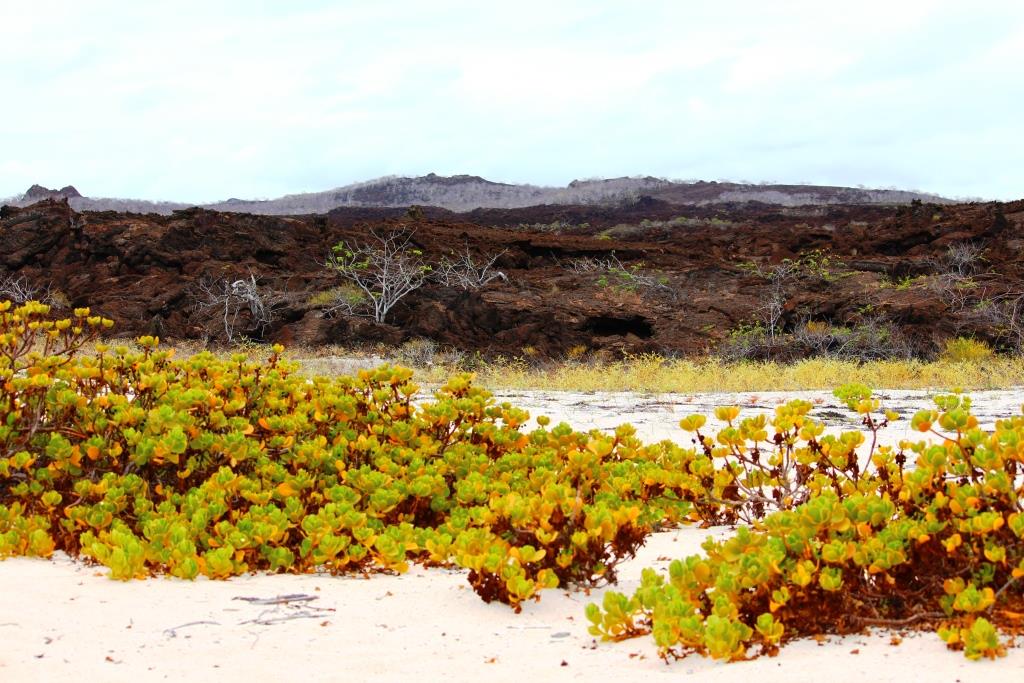 Walking back along the talcum like sand, toes sinking, ankles lapped by turquoise waters, it was time to suit up in our 3mm wetsuits, grab a snorkel and hit the water. 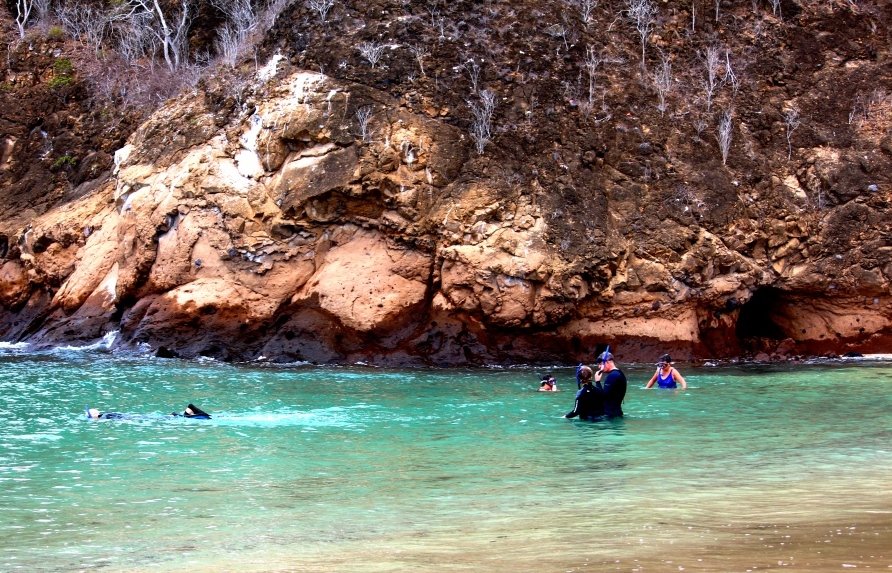 I had barely put my fins on let alone submerged myself into the water, when a playful and inquisitive sea lion came to join us. He glided alongside us, weaved in and out, sniffed our GoPro camera and had a little nibble on the tip of my fin. He popped his head up right in front of mine as if to say 'hello' and then tempted you to chase him as he swirled, twirled and flipped with acrobatic precision. 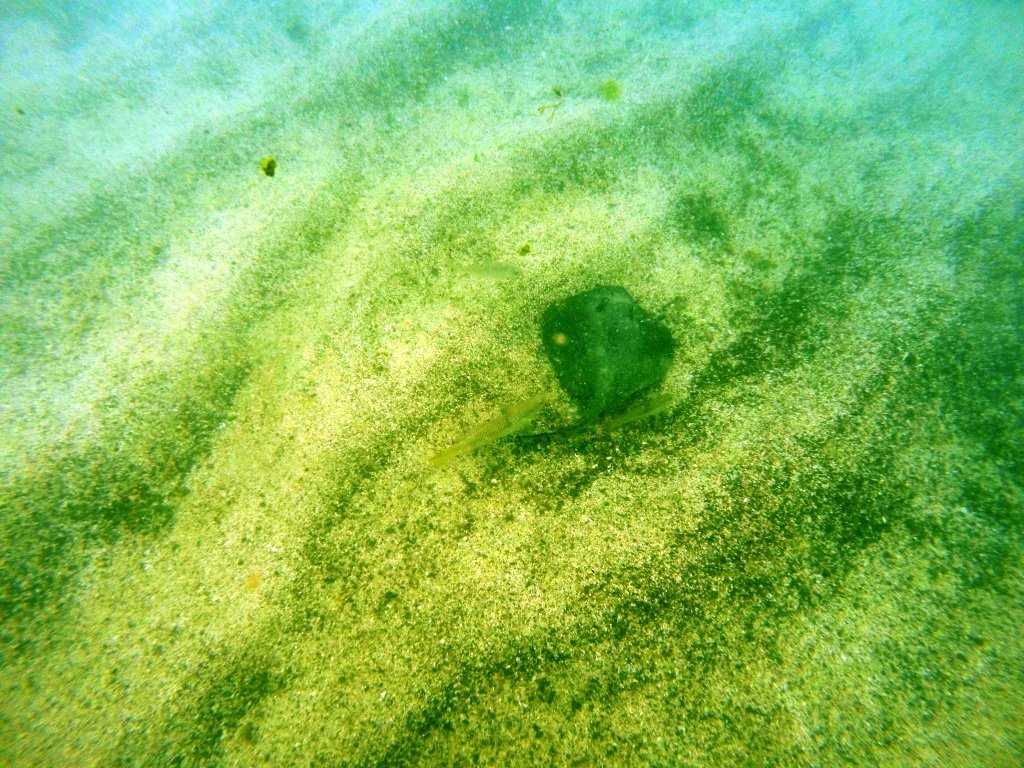 Following lunch, it was time for a ‘power hike’. We had moved onto Punta Pitt, a tuff formation that serves as a nesting site for many sea birds including all three types of boobies, both frigate species, swallow-tailed gulls, Storm Petrels, Shearwaters, Brown Pelicans and of course colonies of sea lions. Punta Pitt is considered to be a first class site on par with Genovesa Island. We arrived via another wet landing. Leaving our snorkelling gear on the shore, we headed inland in search of the elusive Red Footed Boobie. 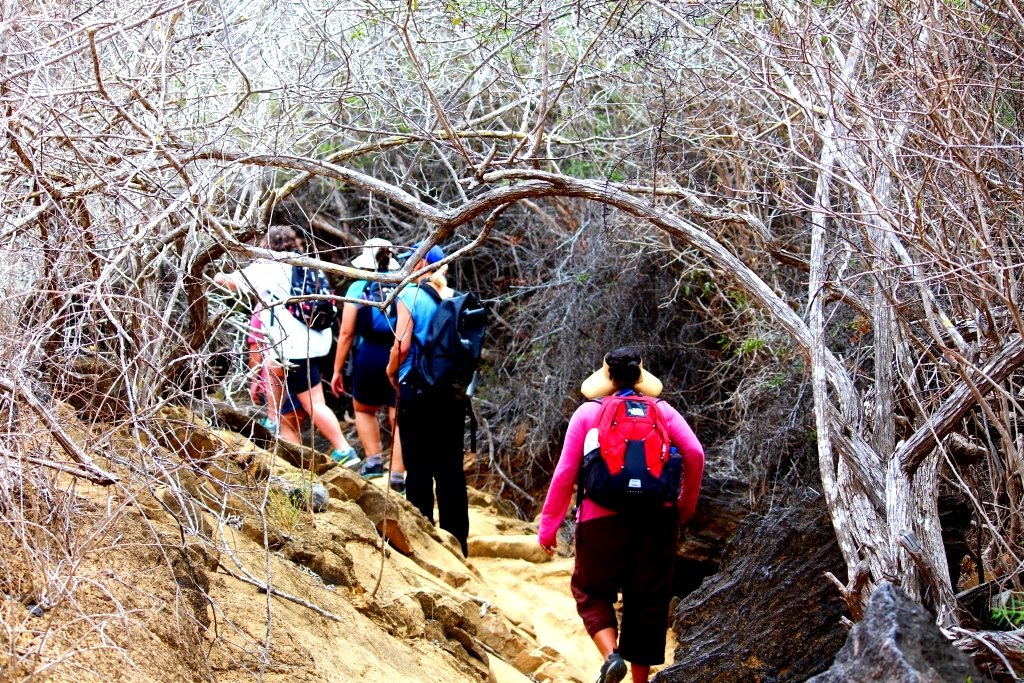 The scenery here was a photographers dream. Barron, sun burnt orange and desert like. I would compare it to a US country and western type scene. Jagged peaks, spiky catci, fiery orange rock with olive green plant life. It was rocky, crumbly and dry.

The hike was narrow and steep. The path uneven and punctuated with boulders. We came across two small snakes (non-venomous I am told) and a plethora of bird life the higher we climbed. 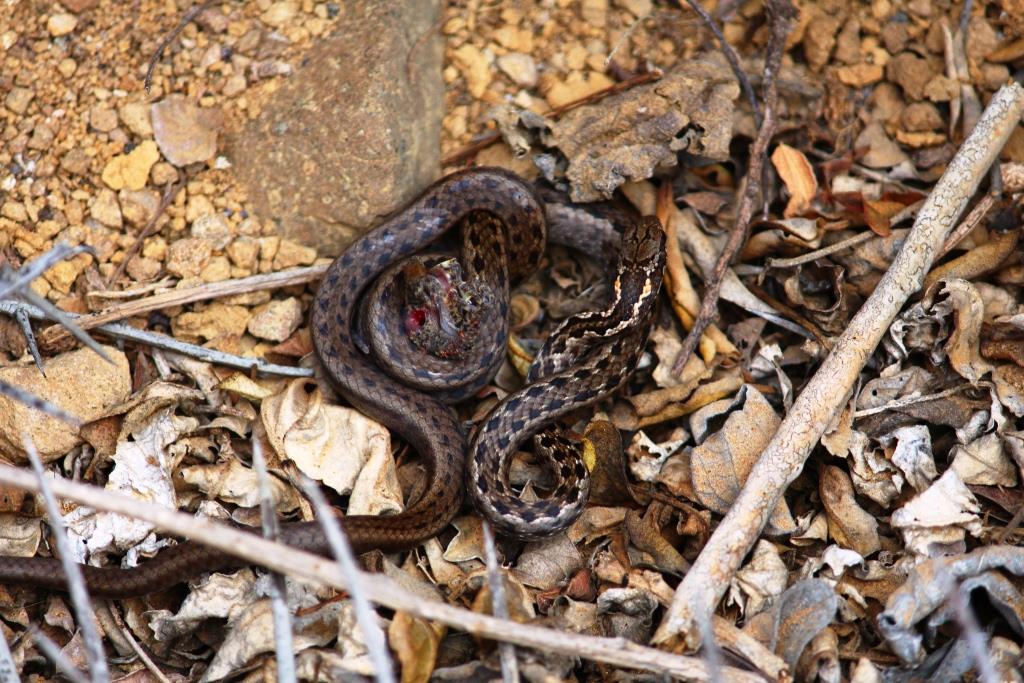 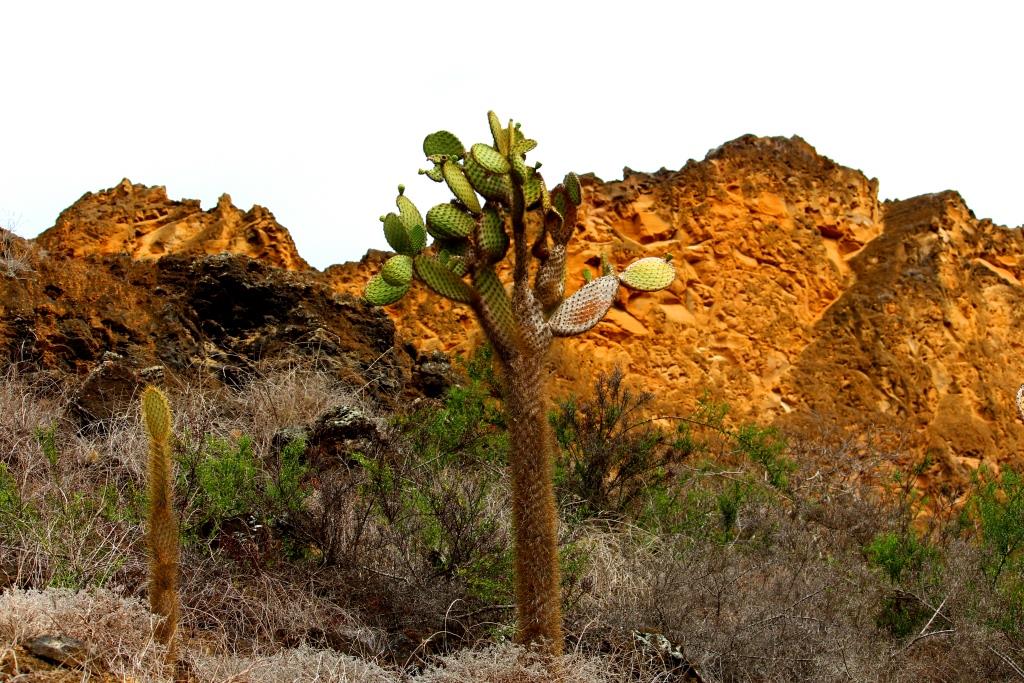 That was until we crossed the ridge at the top of this cliff face.

Suddenly, it was black lava, spread as far as the eye could see, covered in vivid red ‘Galapagos carpet’ and citrus green succulents. The contrasting colours were spectacular. The trees, still leafless and lifeless in appearance with tangled clusters of dead branches. 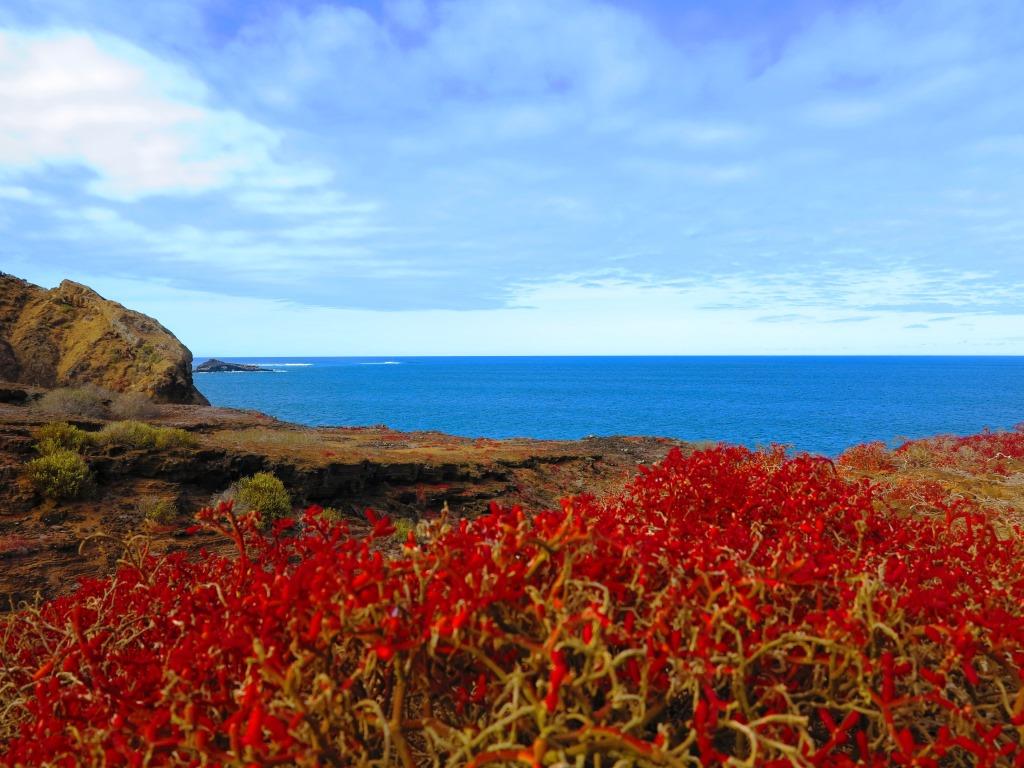 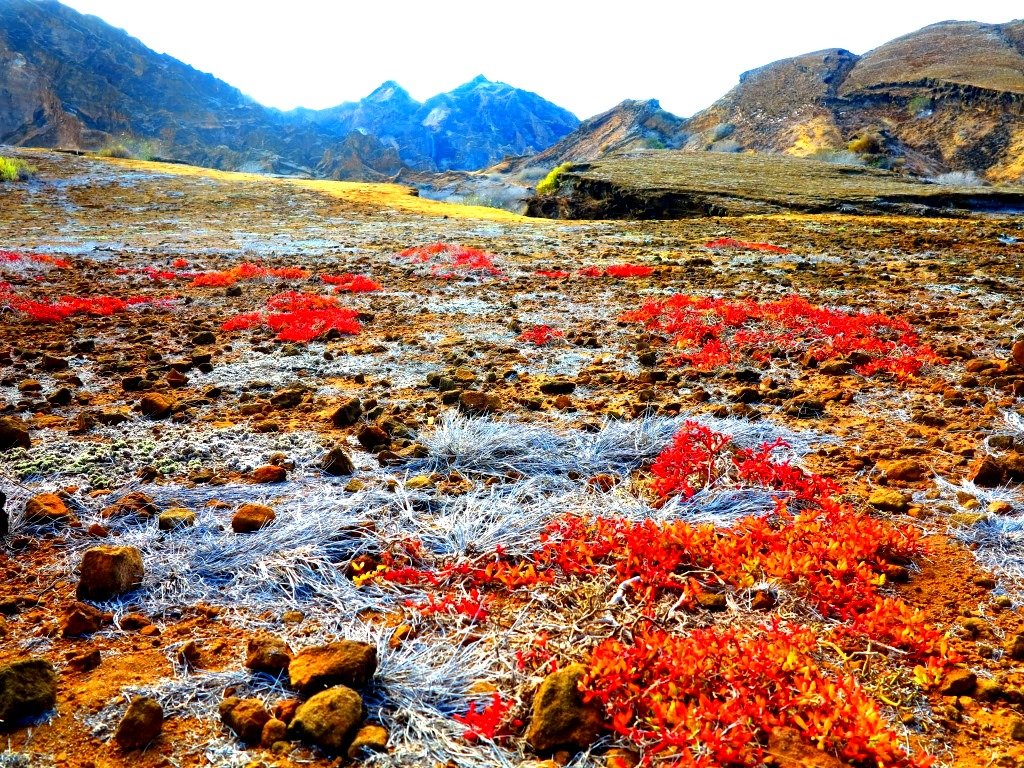 ‘Shhhhhh!’ we were suddenly told as our naturalist pointed towards one of the trees.

There nesting, were two Red Footed Boobies. Barely visible by the strangling, twisted branches, we waited patiently for the Boobie to reveal her feet.

With a million attempts to snap a photo of a bird in a tree hidden by branches, we moved on and found two more nesting in the open with cracked eggs at the bottom of their foliage piles.

These boobies were a little more co-operative and showed us their coloured tootsies. Stunning. Vivid, bright, unusual but beautifully spectacular. 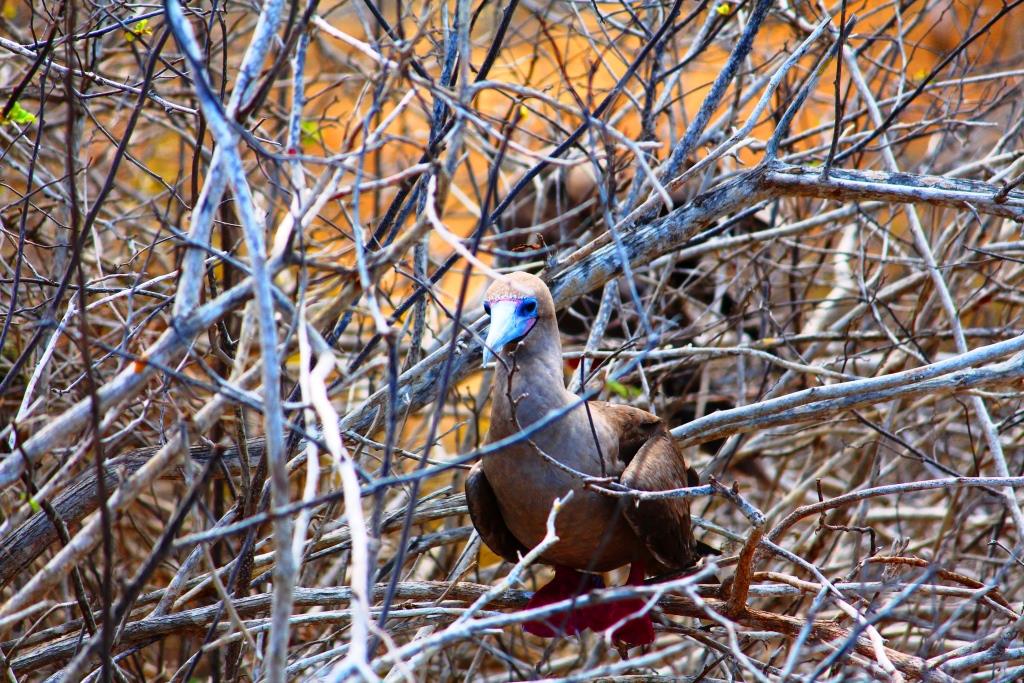 We descended from our power hike and made our way to the beach for one last snorkel of the day.

The water was choppier than the beach we swam at earlier. My hopes for descent visibility were fading. We pulled on our wetsuits and ventured into the waves. Nope. Couldn’t see a thing. A couple of surgeon fish and one or two King Angels but that was it. 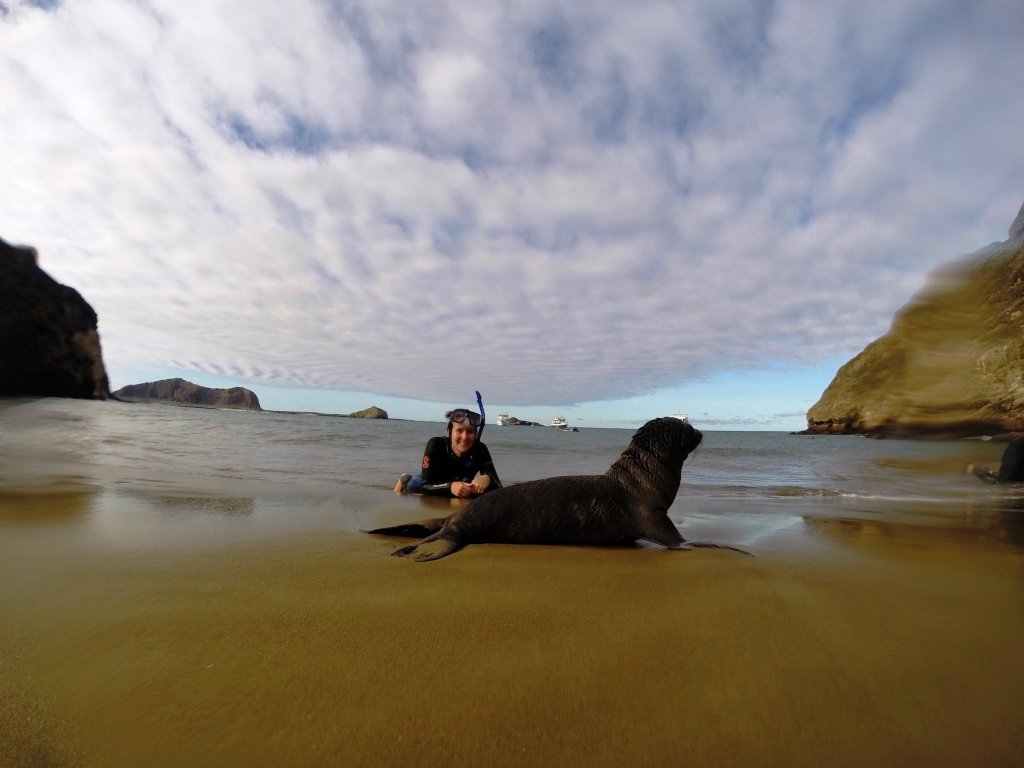 Then, there he was. A little sea lion pup, less than a month old, calling for his mum who was nowhere to be found came waddling towards a few of our group members who were sitting on the breaking shoreline in their wetsuits, clearly looking very sea lion like. Perhaps he thought we were one of them? He came closer and closer calling for food and stopped less than 10cm away from us. He was inquisitive but cautious. He slowly approached each of us with a gentle bark as if to ask ‘Are you my Mummy?’ Unfortunately none of us could assist him with his search for Mum and food, but we delighted in him spending time waddling between us and it was difficult not to put your hand out and give him a scratch under the chin or a cuddle. He was simply adorable. 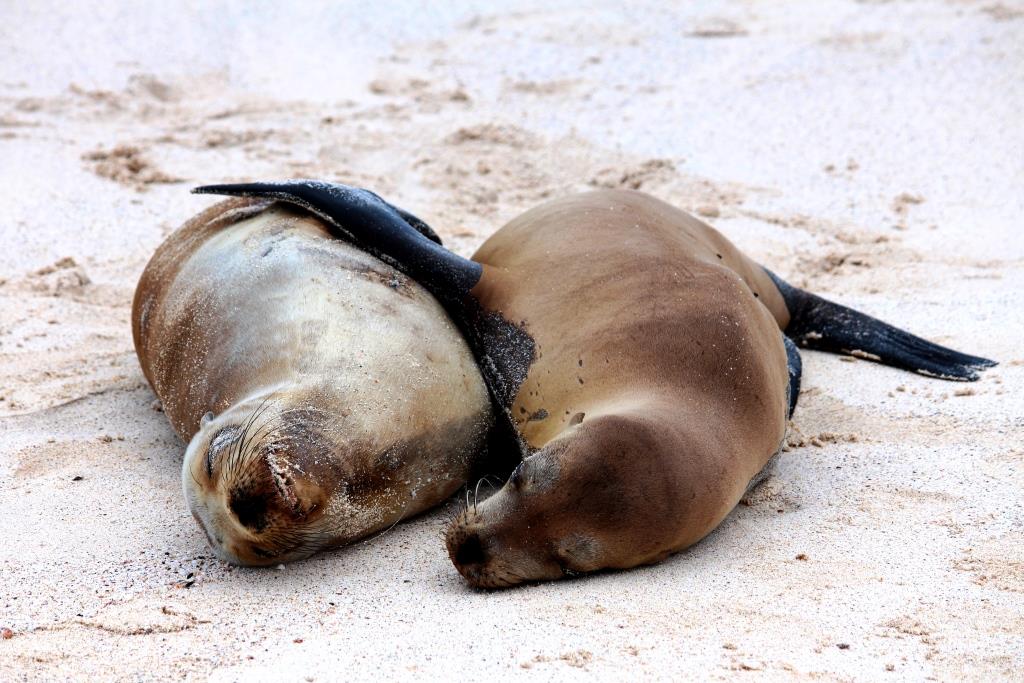 When we were of no use to him, he waddled passed us to the nearest end of the beach where a lone sea lion was basking in the sun. The pup called as he approached and was barked off by the larger solitary sea lion. He then turned around and saw us all again still sitting in the water and came running towards us as fast as his little fins could carry him on the sand only to realise again, that we are not his Mummy either and we cannot help. He continued on his mission to the far end of the beach where a cluster of six sea lions laid, huddled together, snuggling. Fins over each other, noses kissing. As the pup approached each one individually, he was rejected, barked at, snapped at, snarled at, aggressive fins swiped at him and pushed him away. It was heart breaking.

There was one last lone sea lion left sleeping against the cliff face. He slowly waddled over for one last shot, and unfortunately, no this story didn't have a happy ending. That was not his mother either. It was heart wrenchingly devastating to witness.

It was time for us to return to the ship, none of us wanting to leave this little bubba behind, but our naturalist assured us that his mother had just gone fishing… 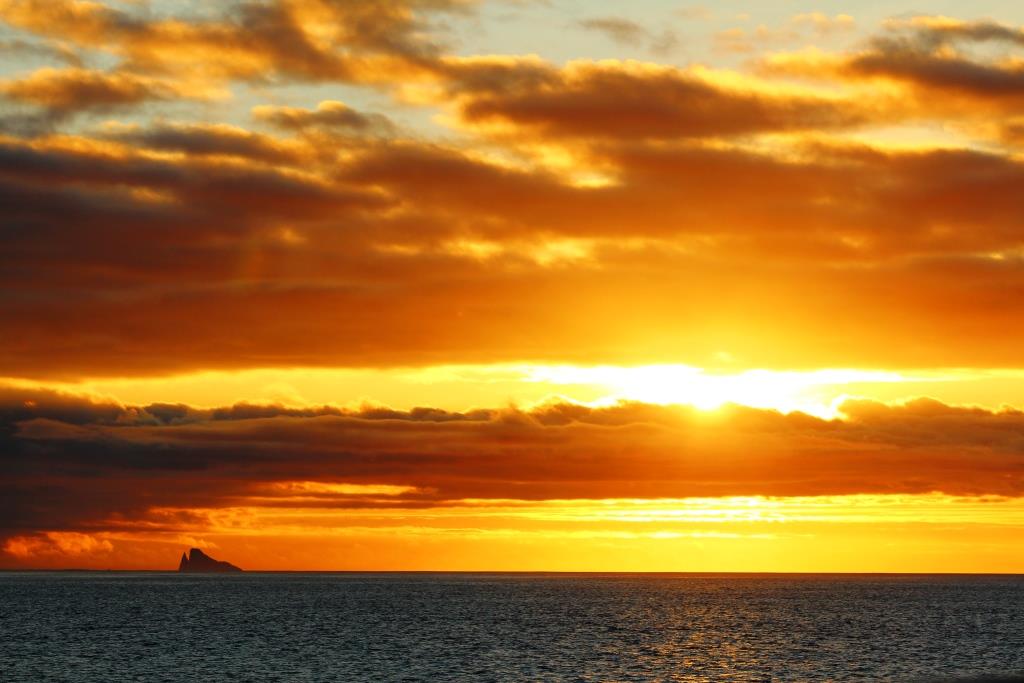