Mongolia's Golden Eagle Festival takes place every September/October in the far west of the country in the Altai Mountains on Mongolia - This festival showcases an incredible spectacle of skill, culture and a powerful relationship between man and eagle.

With so many animal based experiences now falling under scrutiny for 'animal cruelty', company's like ourselves, must take a stance that culture is never an excuse for animal cruelty. It is important for travellers to really understand the difference between true tradition and what animal cruelty is. Many people do not realise that there is more than one Golden Eagle Festival in Mongolia. There is the large main festival which is set up for tourism. This version of the festival was in fact started in recent times purely as a money grab and with the wrong intentions set as the framework around it. Despite this approach, there is still no cruelty to animals involved.

However, the original festival was not set up for tourism. The Owner and Director of our Mongolian local office chats to us about this.

"When the first snowfall arrives in September, the hunters gather together for the hunting season. After successful hunting, they have a smaller festival to celebrate their successes. There weren't many reasons for the hunters to gather in the olden days, so, this was one of the celebrations for them. It has been the same process over many centuries." 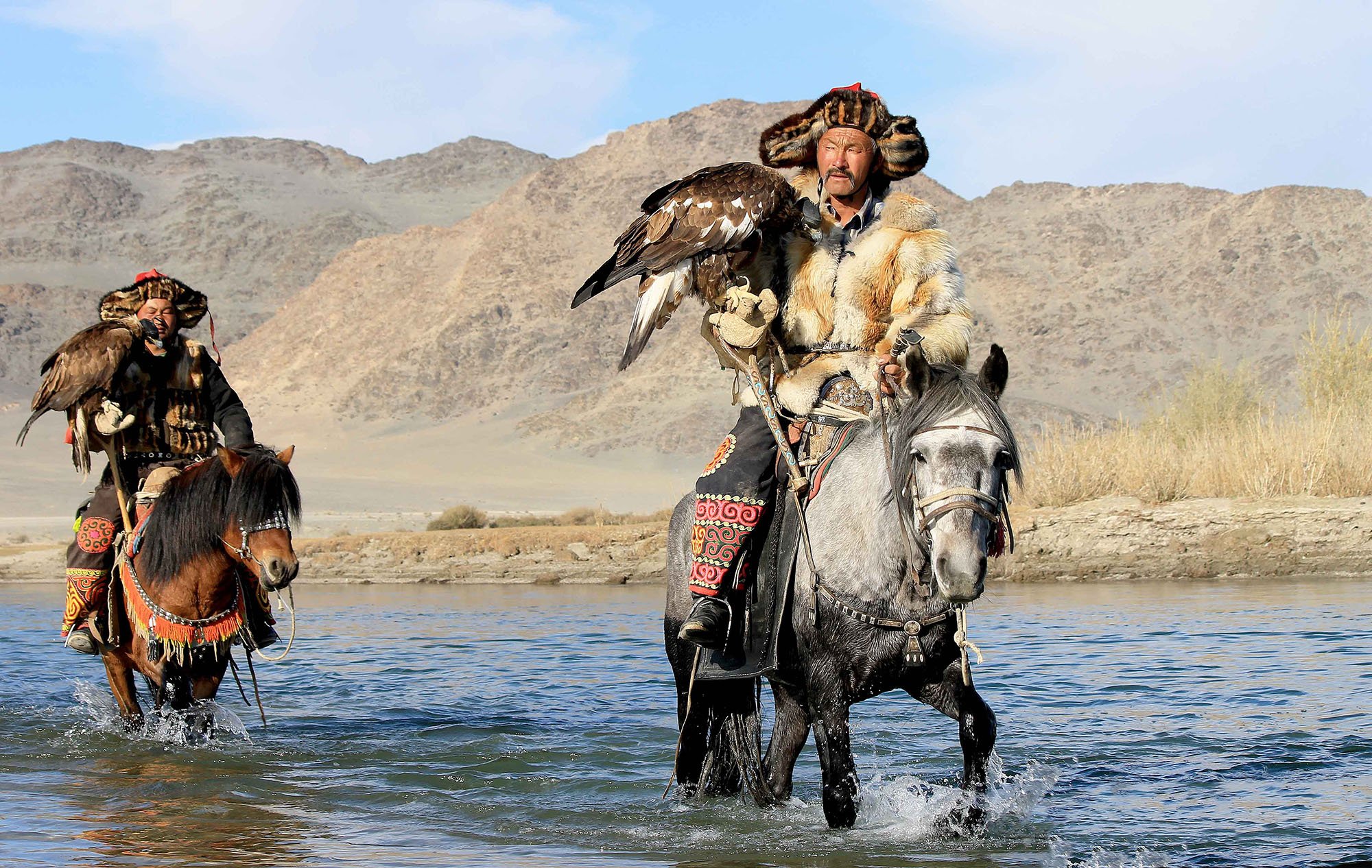 Hunting is not for fun - it is a way of life. The practice of eagle hunting, also known as falconry, is a traditional form of hunting which originated amongst the nomadic people on the Steppes of Mongolia thousands of years ago. In Mongolia, there are about 400 remaining ethnic Kazakh eagle hunters, where an estimated 70,000 people have little or no access to schooling, medical care, electricity, water and sanitation, roads, and other public services.

This partly forested region of the Altai mountains is recognised nationally as a critical natural habitat area and recognised by UNESCO, as a World Heritage site making it an area of prime importance globally for both cultural and environmental conservation. 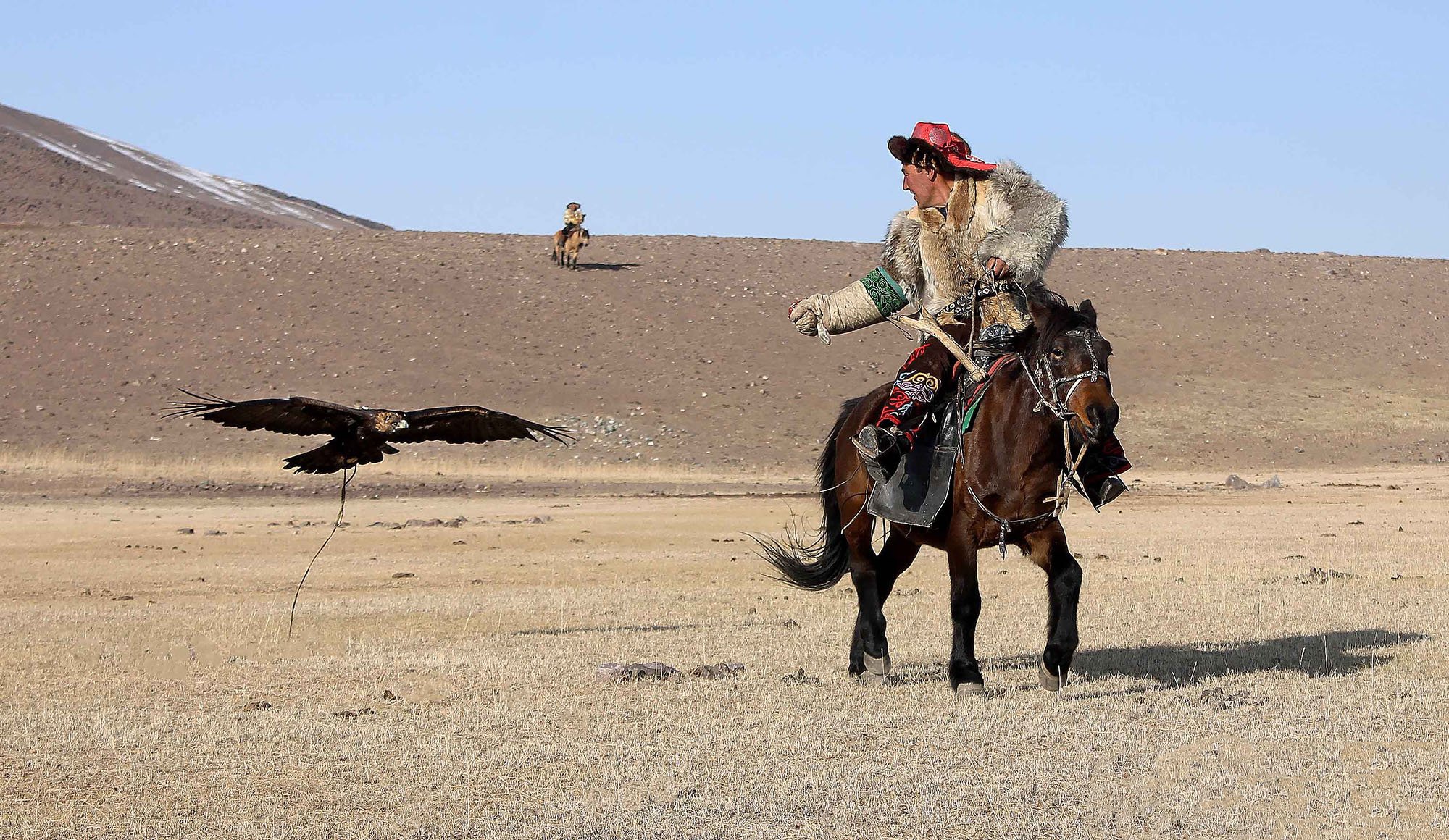 Here, Kazakh eagle hunters use hunting birds, namely, Golden Eagles, to catch foxes like the corsac fox as well as other creatures of prey, and turn the pelts into hats or other pieces of clothing. In the past, fox furs and other pelts were used for insulation and warmth or traded for food and other goods.

The practice of eagle hunting still exists today and retains many of its original customs and traditions in the remote areas of western Mongolia. After ten seasons, the hunter then lets the eagle free with the notion of ensuring sustainable breeding patterns and repeats the practice with another bird. These field skills and knowledge have been passed down from generation to generation, often from father to son through mentoring and apprenticeship, which builds a sense of alliance and continuity. Over time, eagle hunting has become uniquely affiliated with the history and cultural identity of the Kazakh people and community in Bayan Ulgii. In 2010, UNESCO inscribed Falconry to its Representative List of the Intangible Heritage of Humanity. The nomination of falconry is a multi-national submission that was supported by the Mongolian National Commission for UNESCO as well as the Association for Eagle Hunters of Mongolia, which commended eagle hunting as an ancient cultural practice of the Kazakh people that has been transmitted over generations. The most important criteria for inscription on the list is a planned program for protecting falconry in the future as part of the Intangible Cultural Heritage of Humanity. According to UNESCO, the document should address: 1) the falconer and his needs, including medical provision for the raptor; 2) the bird of prey and her needs, including rehabilitation for injured raptors, treatment of raptors in conformation with animal welfare rules, and veterinary treatment of raptors; 3) the prey species and their needs, including legal access to huntable species traditional to falconry, ensuring all welfare issues are met, and ensuring respect for and sporting treatment of the prey while alive; and, 4) the hunting area and its needs. The festivals themselves, provide the hunting family's with a minimal source of income and thus the financial incentive to continue to practice and promote eagle hunting among future generations as a cultural tradition dating back thousands of years. Safeguarding eagle hunting through tourism provides a revenue boost for the local government.

Experts rate falconry as a low-impact, low-stress, welfare-friendly, and sustainable fieldsport that offers a long list of benefits and advantages, including a re-connection with the natural world and no wounded prey (in the wild, eagles apparently catch their prey properly and kill it quickly or it will escape unhurt). It is also promoted as a form of wildlife management that is relevant to society and makes important contributions to natural resource conservation and science.

For those planning to experience the Golden Eagle Festival, travellers will clearly witness that hunters are not cruel to their eagles. They show their love very clearly to their eagles. A Hunter and his Eagle - Photo Credit: Andrew Peacock

For those wanting to experience a different side of falconry, we can also organise travel to the re-release of eagles who have come to the end of their trained hunting prime. A truly special ceremony that really is a once-in-a-lifetime experience to witness. The emotion from the hunters is unexpected and further solidifies the importance of the man-eagle relationship and connection that has formed over many years.