A question we are often asked is what is there to do in Papua New Guinea. Well, the short answer is LOTS! And the longer answer involves describing the various celebrations and festivals that are on throughout the year. Not to mention the bird watching, diving, snorkelling, WWII history, incredible hikes, mountains to scale... the list goes on! Papua New Guinea is one of the most culturally diverse countries in the world. It is also one of the most rural, as only 18 per cent of its people lives in urban centres. There are 852 known languages in the country, of which 12 now have no known living speakers. Most of the population of more than 7 million people live in customary communities, which are as diverse as the languages. The country is one of the world's least explored, culturally and geographically. It is known to have numerous groups of uncontacted peoples, and researchers believe there are many undiscovered species of plants and animals in the interior - not to mention tribes to still be discovered!

The cultural shows are the real draw card . From incredible culture, vibrant colours and a proudness that captures your heart. Read on to learn about the most fascinating festivals that Papua New Guinea has to offer.

The Rabaul Mask Festival is a one of a kind spectacle. Held just 20kms from Rabaul the festival is a showcase of traditional dance, rituals, and ceremonies. On this tour, you will have a chance to experience the show as well as plenty of other highlights. The Festival is a unique celebration and the only one of its kind in Papua New Guinea. Together with their amazing costumes, groups from all across the islands gather in the coastal town of Kokopo to showcase their elaborate ancestral and spirit masks whilst performing ritual dances, each style forging the unique cultural identity of a tribe. Witness the 'Kinavai' opening ceremony at dawn, as the arrival of ancestral spirits is welcomed to chants and the beating of kundu drums by elders and initiated young men on canoes.

The Sepik River Crocodile Festival highlights the importance of the crocodile and its cultural significance to the people of the Sepik River. The Sepik River is one of the largest rivers in the Asia-Pacific region and is home to some of the world’s largest freshwater and saltwater crocodile populations. In Sepik culture man and crocodile share a special bond. The Crocodile symbolises strength, power and manhood.  Skin-cutting initiations continue in Sepik River communities where men proudly wear scars cut into their skin during the rite of passage. These scars, resembling the back of a crocodile, run from the shoulder to the hip.

A cultural and environmental celebration, the Sepik River Crocodile Festival takes place over three days in August, highlighting the importance of the crocodile and its cultural significance amongst Sepik River communities.

This festival features live crocodile encounters, traditional dancing, colourful costumes and visits the sacred spirit houses where men undergo intensive initiation rituals. The Sepik River hosts some of the world’s largest saltwater and freshwater crocodile population’s and the richness of life in this area is celebrated during the WWF supported festival. Witness this region of Papua New Guinea, where humanity has been frozen in time.

Experience one of the largest tribal gatherings in the world with more than 100 tribes participating in the event which attracts thousands of local participants in traditional dress delivering an insight into hidden customs. Performing extraordinary displays of traditional song, rituals and dance whilst decked out in unique costumes, glorious colours and stunning face paintings, the tribes show off their distinct cultures with an undeniable passion.

Attracting over 1000 tribesmen and women from all over the country, this sing sing event is a dazzling array of colour and energy that showcases the diversity of this fabulous island. The town comes alive for the event and the enthusiasm of the performers and spectators is truly electric. This is one festival that you will remember long after you have returned home. Villagers from all over the region come to showcase their costumes, music, dance and culture. The festival has been running since the 1960s and was originally about promoting peace between warring tribes. Today, it's an opportunity to experience first-hand the customs of about 80 tribes in one of the most culturally intact places in the world.

Perhaps the most famous cultural show in Papua New Guinea amongst locals, the Mount Hagen Show brings together sing-sing groups from all over the country in an amazing conglomeration of colour, beauty and culture. The show was initially created for the purpose of sharing cultural experiences with each other, calming the ever present tribal animosities by bringing all tribes together in one cultural event to expose the positive side of life and to celebrate the diversity of cultures amongst the natives. Witness this festival and the once-in-a-lifetime opportunity t see the tribes dance, sing and perform wearing some of the world’s most fascinating tribal ware. Kenu (Canoes) and Kundu drums are a significant part of the lives of the people of Milne Bay, Papua New Guinea. The canoe and the kundu are widely used in traditional ceremonies and rituals in Milne Bay.  The 'war canoes' are specially crafted from special woods under strict customs to derive the best results and ensure their use is a successful or victorious one.

The canoes used in the festival are crafted the same way as the ancestors of the Milne Bay people built their own canoes many years ago. The colours and patterns reflect the tribe and the area the canoe comes from.

This cultural highlight comprises dozens of canoes, some with 40 plus warriors, adorned in traditional dress and paddling to the beat of island drums, leaving a powerful impression. Races are held amid much rivalry and celebrated with just as much revelry. The dance performances are even more spectacular with brilliantly attired groups from all around Milne Bay. A festival not to be missed! 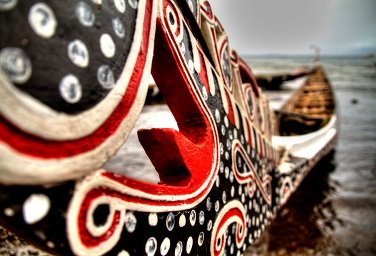 More information about travel to Papua New Guinea can be found on our website. If you would like to make this experience yours then contact us so we can help you secure your spot on one of these amazing adventure's of a lifetime - places are limited. We look forward to welcoming you on a Crooked Compass tour!