Durban, an honest African city, with structured western linings. Despite the constant push of modern pressures to westernise, it will always remain a heavily African influenced city. It is an eclectic city that you could loosely call a slum town with even many locals who do not dare to venture into the inner streets of the city centre. However, the innards of Durban is where all the action happens and hidden cultures remain undiscovered.

To me, I saw it as a melting hot pot of spirituality and of effective co-existence of a multitude of religions, cultures and languages inter-weaved together without tension. The blend of Muslims, Catholics, Zulus and minority groups create this city and make it fascinating.

Standing on the corner of the main street, I pause to take in my surrounds. In front of me, the largest mosque in Africa, to the left a Sangoma sits on the corner, drawing crowds as she performs a spiritual act. Her haunting chants ring out across the bustling intersection. Zulus traditionally dressed, laced with beads walk by as a man in pyjamas crosses the road and enters an expensive western shoe store. A speaker is switched on nearby, the bass vibrates through your feet and as if in a trance, the African people begin to dance. Young, old, even babies strapped on to the backs of their mothers bop away. The African people have rhythm built into them - turn on music in a street or park and within minutes you will have a crowd of 200 people.

As I walk through the dusty streets, a young man catches my eye. He has shoulder length dreadlocks laced with beads - this style of hair is said to help him hear the spirits calling him. He is wrapped in a Swazi cloth and has goat skin wound around his wrists from a recent sacrifice. A small jar hangs on a beautiful beaded line around his neck filled with 'Muthi,' medicine, for protection. This young man is a Sangoma.

Sangoma's are traditional healers, diviners if you will, chosen from the psychic world and are selected by their predeceased ancestors. Sangoma's are 'called' and they cannot ignore these callings or they may die according to their beliefs. These calls can come at any time of your life, generally starting in the unconscious mind through vivid continuous dreams. When these calls are left unanswered, they start to take over your conscious life and turn it upside down until you answer the call.

Located directly across the overpass behind the vibrant Victoria Street Markets, these extraordinary individuals are found in the Muthi Markets, also know as the Witch Markets or more commonly, the Herb Markets - an area of town rarely visited by those not of the Muthi world.

Walking through these unique markets, I was bursting with cautious curiosity and desperate to take photos of these unusual sites I was encountering. To my disappointment photos are not permitted in this area of town as cameras are said to attract bad spirits. I walk and watch doing my best to take in these surreal surroundings. Stall after stall after stall is lined with dried crispy anaconda skins stretching from the ceiling to the floor, red looking skinned monkeys dangle from hooks, baboon paws lay in piles on the dusty ground. Each animal and animal part is used for different spirits and for different treatments depending upon the patients condition.

These markets lack the colours and liveliness of the surrounding fresh produce and various other market places and have a feeling of death and solemnness about them as shadows loom in every corner and colourful beads and intricate weavings are replaced with carcasses and skeletons. A sense of black magic floats in the thick air swirling with my inquisitiveness as I try to piece together the puzzle I am witnessing and try to understand this unrelatable world.

Welcome to the mysterious world of traditional healers.

Many Zulus consult a Sangoma as their first point of call for medical assistance before proceeding to hospital. Treatments can be anything from ointments made from smashed innards and ground bones to acupuncture performed with a porcupine quill.

To be a Sangoma it is not an easy life. It is a life of humility. Each day begins with a wash in iced water before the sun rises. Airways and stomachs must be cleansed and cleared prior to full day light. Snorting snuff ground from Virginia or black tobacco clears their airways and heads so they can clearly communicate to their ancestors. A large drink of saline water is ingested causing the Sangoma to vomit. This ensures their stomachs are cleansed for communications. Piles of bound straggly sage bushes line the uneven ground at every stall. A sage bush is burned to ask ancestors for protection as Sangoma's begin their divine callings with the other side. The aromatic scent floats in the air but is suffocated with the pollution from diesel vehicles overhead.

I continue walking, not quite knowing where to look next, my jaw on the floor. These rickety wooden shacks are brimming with bottles of snakes in brown syrups, dead owls hover overhead next to dried out bat carcasses and eagles are thrown in a pile, their stiff splayed claws jutting into the air.

The animals and animal parts used in these traditional healings are caught by local villagers who live in the wilderness and sell them to the Sangoma's for money but also in the hope that their risky but generous gestures will be rewarded by a long life free from spirits, sickness or disease.

The Sangoma's, both men and women in their dilapidated shacks glare suspiciously as I gawk at their odd collections. They are plump individuals with dried cocoons and tops of soft drinks cans strapped to their ankles to help ward off evil spirits. Their hair much like the young man I saw earlier in the street is laced with beads. Necklace upon necklace hangs loosely around their necks and heavy skirts made of dark tree bark which is never washed, wrap around the waists of both male and female.

I take a moment to study their faces. Serious and deep in concentration, their eyes narrow with focus and suspicion, furrows buried deep into their brows. I smile encouragingly and receive a hollow blank stare. The mind boggles.

I walk on. Dried crocodiles, large tortoises, twisted antelope horns and heads of who knows what glare at me as the Sangoma's hack away at tree roots in the background with one eye never leaving your face. Surprisingly, despite the heat of the suns rays and the masses of carcasses and body parts, there is no odour, no stray dogs and no flies. Sitting on woven cane mats and wearing shoes made of tyres, bowls of herbs are mixed and crushed as poisonous flora is carefully deconstructed.

I look to my right as I hear a sickening crack (most probably a bone being snapped) and almost smack my face into a skinned red raw meerkat still complete with whiskers and all - just no fur. Above that is the city flyer over, modern cars whizz past, a large KFC billboard advertising 'Ka-Ching' deals watches over.

As my walk through these insightful and eye opening markets comes to an end, I attempt to reflect on what I have just witnessed as a newspaper flutters past with the headline "A Sangoma Stole my Face".

Not once did I feel unsafe or threatened walking through the Muthi Markets, however I ensured that I was extremely respectful of their culture, traditions and beliefs as I just wandered through with the fascination and intrigue of someone from another world.

I was humbled by the way these extraordinary human beings are able to ignore the pressures of western and modernisation and hold on to their unique traditions so strongly without interference from government, police and other potential forces of influence.

It just clarifies that mixed races, those of different beliefs and traditions can live peacefully side by side. Durban should be showcased and highlighted as a city of example to the rest of the world. 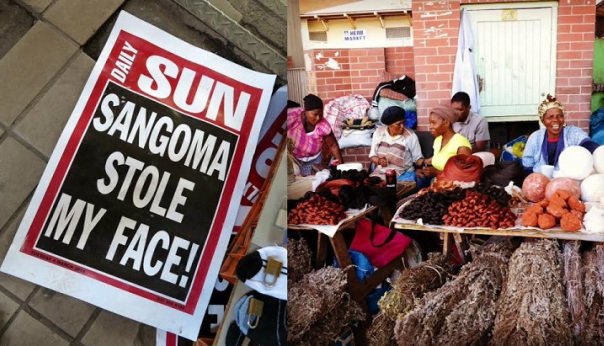 Looking for more unique experiences to include on your travels? Download the Crooked Compass Travel App for further inspiration.