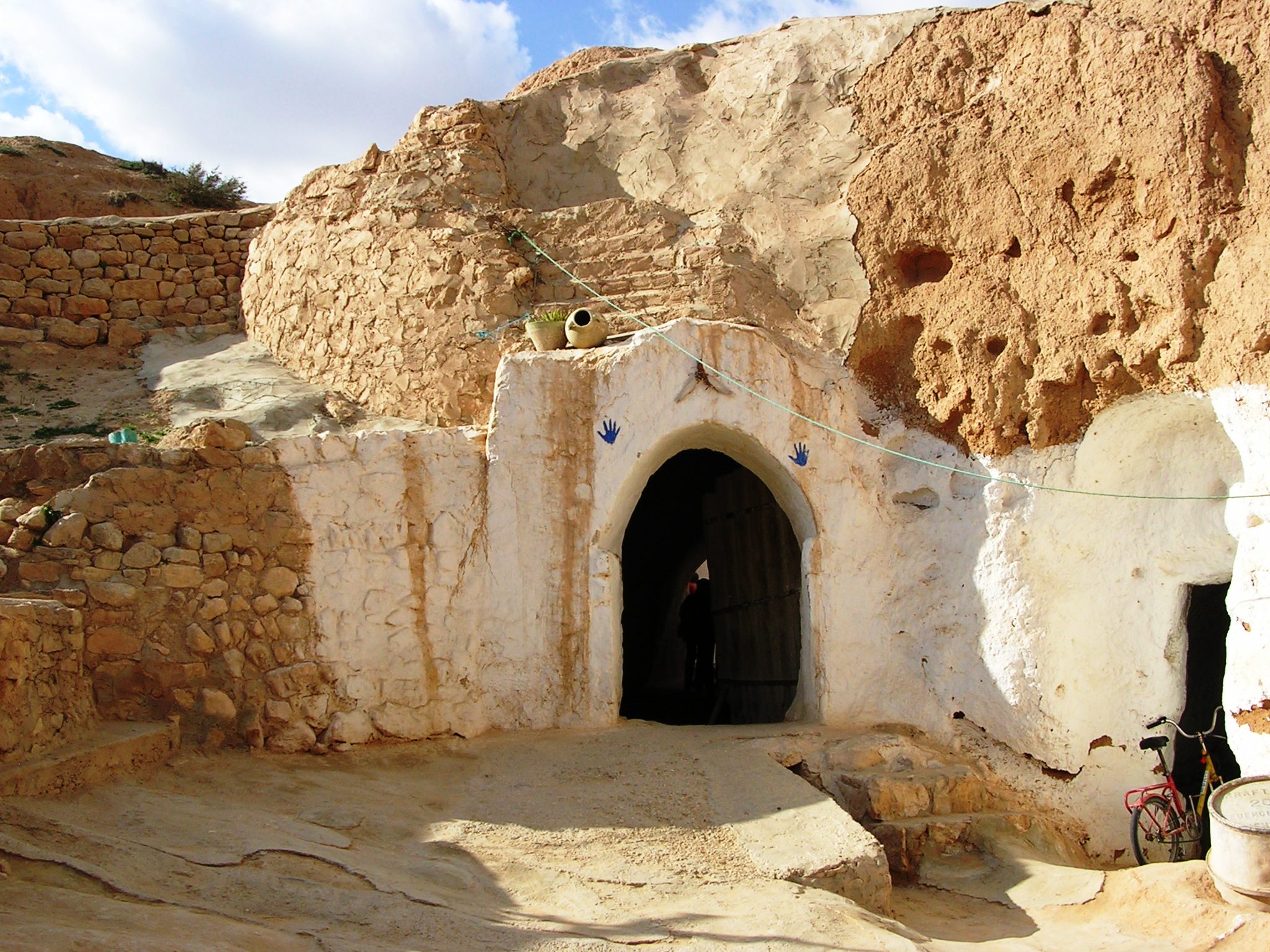 An underrated, off the radar, pure gem located in North Africa on the Mediterranean Sea. Relishing in the balmy climate of the Med, and oozing with the rich influences of the Ottoman, Arab and Roman times, this slither of a country squashed between Algeria and Libya is bursting at the seams with a vastly fascinating history and stunning but juxtaposed scenery. This lesser known nation offers the traveller a truly unique, authentic experience, overflowing with a culturally rich heritage more so than many countries five times its size. Travelling through Tunisia is like a magical road trip to the unfamiliar. When travelling to the unfamiliar, what are the must see’s that you must tick off your list? El Jem is an extremely well preserved golden sandstone Colosseum. Famed for filming the movie ‘Gladiator’ here, and second in size to the colosseum in Rome, this beautiful piece of Roman history provides you with vast access to its grounds allowing you to walk and climb on its steep amphitheatre stairs and without the obstruction of scaffolding to ruin your photos. Built over 1800 years ago, this impressive site was the scene to many cruel and bloody battles between beasts and martyrs. Today that has been replaced with the floating notes of classical music festivals and world famed orchestras – a far cry from the haunting history it once homed. For any Star Wars fan, this site is a must see. I am by no means into Star Wars at all, but I have to say, this site is pretty impressive. Located in an endless desert landscape, these man made caves at Sidi Driss are a 5 pit dwelling collection of underground labyrinths and vaulted rooms.

The village of Matmata itself though, was the real draw card for me. Houses here are built vertically into the soft ground and into the side of rocky outcrops. These dwellings have no roof, simply a vast hole open to the sky allowing the heat to escape. Nothing remains on the floor in these homes (which is just dirt), everything is on shelves. If it ever floods, everything just runs downs into the canals carved along the sides of the walls where skirting boards would normally feature. The walls are lime washed white, with the main rooms including bedrooms and kitchen, being tunnelled out from the central gathering area. Even the beds are on shelves! There are only 100 of these unique homes left. They are being surrounded by new modern homes. A handful of locals do still live this way which proves that people can live in harmony with the harsh unforgiving desert climates. Homes to the indigenous people of North Africa. Tunisia is littered with them. Some are still fully functioning villages providing glimpses to ways of life unchanged and untouched for centuries, others are abandoned shells and hallows - fascinating to explore on foot. The abandoned Berber Village of Tamerza and nearby Mides were abandoned after being flooded over 40 years ago. Built into the rocky hillside, these villages offer sweeping views over the surrounding stony desert. The desert here at a glance, is seemingly quite parched and sunburnt with the terrain whipped and rippled from the wind. However, in Tamerza, although surrounded by crumbling canyons, beneath these towering walls and gorges is a vast turquoise oasis and two waterfalls – definitely not something you would expect to uncover in this depleted part of the desert, but it really is truly spectacular. 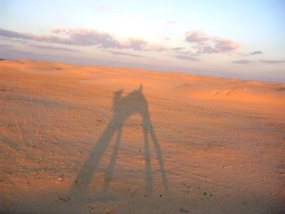 Sunset camel ride in the Sahara

4. Camel Ride into the sunset through the Sahara Desert

There is nothing quite like the grunt of a camel as you throw your leg over its hump and dip forwards as it awkwardly clambers to its feet. Sloping gracefully across the infinite dunes, with nothing and no-one to see for miles, this is truly breathtaking and for want of a word, serene. Bopping along as the sky gently blends from burnt oranges to vibrant pinks, the harsh silhouettes of jagged palm trees makes for an amazing photo. Made even more special on this occasion, was my 10 year old camel guide telling me how beautiful I was before writing my name in Arabic in the sand with his finger. So romantic! Chott el Jerid is a vast salt lake 125km x 500km in size with virtually no water. Arriving here for sunrise is truly beautiful as the fiery orange sun floats amongst a sky of rose pinks and mauves. The minute amount of water that was present during my visit was reflecting a mirror image of the sunrise. Once the sun is up, this vast salt flat offers some great sights, especially when the sun shines on the salty surface, combining reflections with the heat provides startling optical illusions. We encountered many shepherds with their crooks hooked on their arms hassling their sheep and goats – a picture perfect moment right here! In the centre of the lake, there is an abandoned boat where you can take some novelty photos. What better way to explore the desert than to head off road for some adrenaline pumping dune bashing! Power down near vertical drops, as you climb and descend some hectic sand dunes. On our excursion, we came to this large sand dune which resembled a camels head. Upon scaling to the top, we were greeted with panoramic views over the Sahara. Further over the hill, we came to Mos Espa (Darth Mols look out in the Phantom Menace) where we explored the unusual empty shells of these strange round buildings before continuing on our adventure.

7. Horse and Sulky into an Oasis

For those who like to take things at a slower pace, a horse and sulky ride into the centre of an
oasis could be more your style. Travel in old worldly fashion as the horses trot along and you kick back in the comfort of cushions. Upon arrival into the oasis you may witness locals climbing palm trees effortlessly before sharing fresh palm juice and other local produce from their lush refuge. Most oases have old villages situated nearby which are teaming with culture. After hopping down from our sulky, we explored on foot through the old village of Nefta. Traditional but beautiful brick work featured here as we weaved our way through the winding and vaulted alleyways where several local village children decided to join us and hold our hands as we ventured through their town.

8. Dougga
Dougga is what you dream of seeing when you imagine what a Roman city should look like. Your imagination will spark to life as images conjure and the creak and clatter of chariot wheels down the stone streets wedge their way into your mind. Dougga showcases a stunning amphitheatre nestled into the hillside overlooking valleys and wheat fields, traditional roman baths and colossal temples which are all built out of golden stone and are extremely well preserved compared to those of similar age in Rome. Much like a small city, many stores, toilets, homes and shops are still very evident which brings your exploration of this area to life. 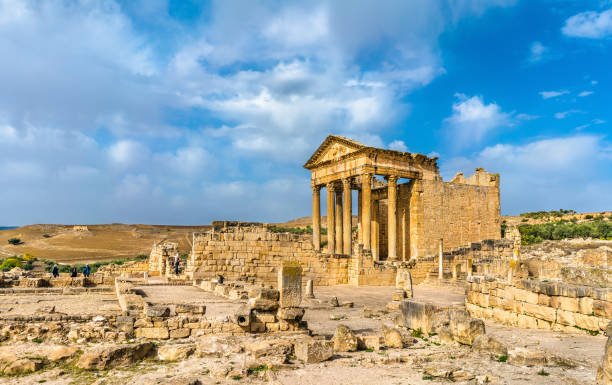 The Roman Capitol at Dougga. A UNESCO heritage site in Tunisia, North Africa

Driving through Tunisia, although confronting at first, you become accustomed to seeing street side BBQ’s with hanging carcasses dripping upside-down. Small flocks of sheep and goats gather alongside awaiting their fate. Local Berber families run these roadside BBQ’s where you select your animal whilst it is still alive. The animal is then defeated and cooked in an extremely fresh BBQ for you. Although this sounds confronting and gruesome, this is truly an authentic, traditional and very fresh and safe way to experience eating like a local in a very local setting. (Not for the faint hearted.)

Travelling around Tunisia can be surprisingly cheap and very simple when travelling with the locals in a louage. A louage is a shared long distance taxi seating nine passengers. They are clearly identified by their red stripe. There are no timetables or schedules for louages, they simply depart once all nine seats are filled. This is truly an exciting way to travel from city to city mixing and mingling with the locals, but be warned, they are not air conditioned so can be quite uncomfortable in the summer months.

11. Explore the many, many Markets

Tunisia is overflowing with markets. Fresh produce, livestock, leather, handmade shoes, grains and wheat - anything you can image. Ben Guerfane Markets are one of the more exciting and traditional market places which are very lively and agricultural, more so than other markets in the South. There is a Libyan market here too within a walled enclosure; it is brewing with local culture, and is open daily - Sunday is the main day when all the stalls are open.

Douz Markets are another winner. The Douz weekly market is held on a Thursday. This alluring market attracts locals, nomads and tourists alike and the presence of tourists makes it all the more enticing. The market is situated in the market square itself, where you can buy a broad selection of goods, for example, jackets, souvenirs or made to measure desert shoes.

The regions renowned ‘deglat en nour dates’ are for sale behind the Southern side of the square. The Livestock section is Southwest of the square. Camels are rare but can occasionally be found along with horses and donkeys as you come down the stairs to the compound, to your right. Most of the animals sold here are sheep and goats. 12. Get lost in a Medina
A medina is a walled city with a tangle of web like streets which are very narrow, twisted
and are teeming with locals showcasing their wares.  Everything on display in the souks is designed to appeal to tourists. The most popular articles include embroidery, pottery, leather goods and carpets. Further into the maze of the medina, you will find residential homes and locals living traditional, untouched, lifestyles.

Kairouan houses one of the best preserved medinas in Tunisia. Enclosed by 10m high walls dotted with numerous defensive towers dating back to the 18th century, the narrow streets within are extremely old and look it too. A photographers dream! The locals who still reside here show off their wealth in ornate and colourful doors, windows and arches which look like they belong in the Caribbean more so than North Africa.

13. Camp in a Berber Tent under the stars
There is nothing quite like the sounds of silence when sleeping under the stars in the Sahara desert. The sky is dark and the stars glitter like nothing you have ever seen before. They seem closer, bigger and brighter. The food is traditionally authentic and cooked underground from the heat of day by the local Berbers. Live out your Arabian Nights fantasy as you choose to either sleep inside your tent or to bring a blanket out and star gaze in the open wilderness of the desert. Truly magical.

Looking for more unique experiences in Tunisia? Download the Crooked Compass Travel App to book or for further inspiration.